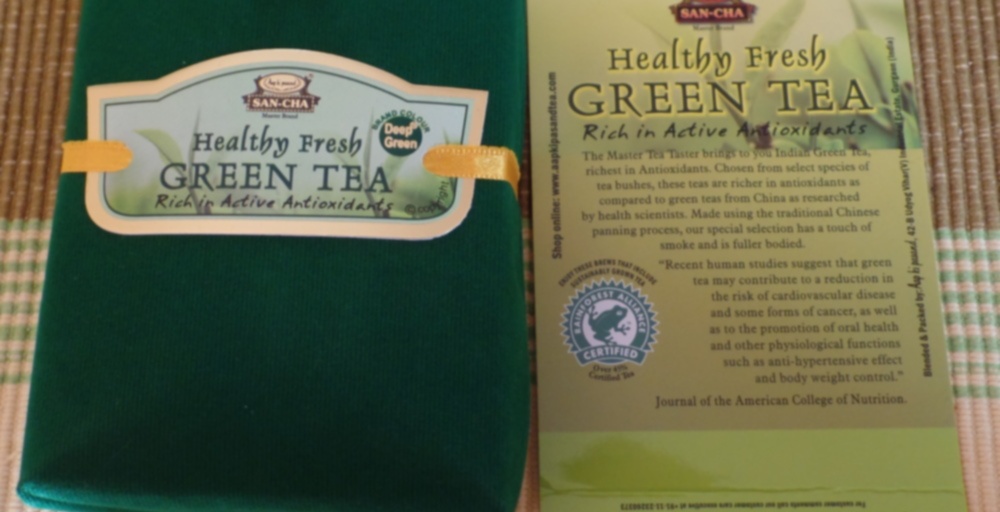 The third tea of the teas bought by my husband in Bangalore. A “simple” green tea (i.e. it doesn´t have special aroma´s, it isn´t blended), so it seems. The packet claims that Indian green tea is richer in antioxidants than Chinese green teas, “as researched by health scientists”. It also says : “Made using the traditional Chinese panning process, our special selection has a touch of smoke and is fuller bodied.”
I´m personally not too worried about which tea and which level of antioxidants is recommended, as long as it tastes alright. I tried this tea a few times, steeping it between 2 and 4 minutes and overall the tea is lightly coloured, has little bitterness (at the higher steeping times, the last sips are indeed bitter, which I think is normal), and has quite a full body for a green tea. My main objections against green tea in the past were the grassy mouth-feel and the bitter finish, which I don´t observe here, at least when keeping the steeping time low and when drinking the tea not too cold. I don´t know whether this is due to the green tea being Indian or having more antioxidants, I guess I just almost never drank good quality green tea before. In comparison with the Chunmee variety I tried earlier (see previous tasting note) however, this is a very “thin” tea, without a well defined tasting profile.