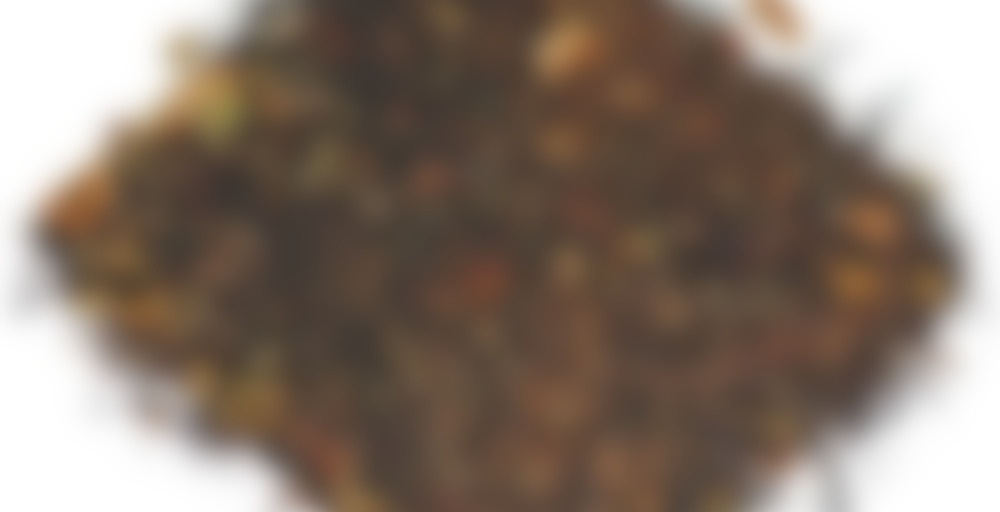 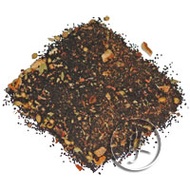 Superb body with mellow Indian spice notes. Very enticing with milk, you will think you were back in India while drinking this exceptional blend.

TeaFrog gives nice big samples. This one is big enough to make a couple of cups worth on the stovetop. Using TeaFrog Assam Banaspaty as the extra black tea since the mix contains Assam to begin with.

In the packet I smell mostly cinnamon, and then coriander, and then an anise/fennel licorice scent. In addition to cinnamon, cardamom and pepper, this has some pretty interesting ingredients that haven’t been in other chais I’ve tried. I also noticed that ginger isn’t listed, and I think it’s been in all the other chais I’ve had thus far.

True to its description, this is a mellow chai. The cardamom, cinnamon and coriander seem to me to be acting as an ensemble rather than calling attention to themselves individually, which is, I think, a good thing. There’s an interesting, cooling feeling on the tongue after sipping. I’m wondering if this is the anise or fennel? Other than that effect, the anise and fennel is detectable but extremely gentle. There’s no strong licorice flavor, which in my view is a good thing. I’m not tasting the pepper. There’s no kick at the end.

I can’t comment on the authenticity having never been to India. This is a tasty chai, but I think I prefer a little more spice, even in my mellower chais. Though I didn’t taste them back to back, this seems to me less spicy than the TeaGschwendner Indian Chai which was pretty far down on the spicy continuum already.

anise/fennel/licorice… uh oh… If my (one) experience w/ “authentic” chai (via an Indian restaurant run by an Indian family)… this is probably better than the “real” thing.

All of those made me smile, and then I hit “Masala Chai, the squeakquel” and just died XD

How about Masala Chai the Teaquel :)

Masala Chai and the Teapot of Secrets

@Rabs- I just saw the word “boogaloo” online for the 2nd time in 2 hrs! haha!

“Boogaloo” and “Teaquel” have made my night :D

ooooboy ;) It is actually the second attempt at our Chai – thus Masala Chai II – however my favorite is Masala Chai the Teaquel – good one Anne ;)

Steeped this in a semi-traditional method (i.e. I think I remember what Lena posted eons ago, and kind of made it up as I went along) and it turned out pretty well. The hubby loved it, and I thought it was pretty good, but I would have preferred some more spiciness.

However, as a soothing afternoon tea, it hit the spot.

lol…thanks for the shout out! Miss you girl! Wish you lived closer.

Got my Teafrog order today! I actually tossed this in as an afterthought, having forgotten that they offer a free sample with every order. So! I used a little less than a teaspoon, because the spices smelled very strong and the black tea is tiny CTC pellets: 3/4tsp for 7oz water seems to have worked fine. The dry leaf smells pretty strongly of anise to me, but the taste is more balanced. With milk and sugar this is a good, spicy chai that I might buy more of (I don’t think I’d want to drink it plain though). I might stretch it by adding some plain black tea next time.

ETA: Lasted fine through 3 steeps, with a little extra Assam. It’s a very nice blend, somehow managing to be spicy without either a pepper or ginger kick.

A nice smooth chai. Very good with sugar, which seems to bring out the spicy notes a bit more; this isn’t a particularly spicy one but it’s very good, and the flavour is assertive enough to drink with dessert. Holds up to a lot of milk as well. Good thing the sample pack is so generous!