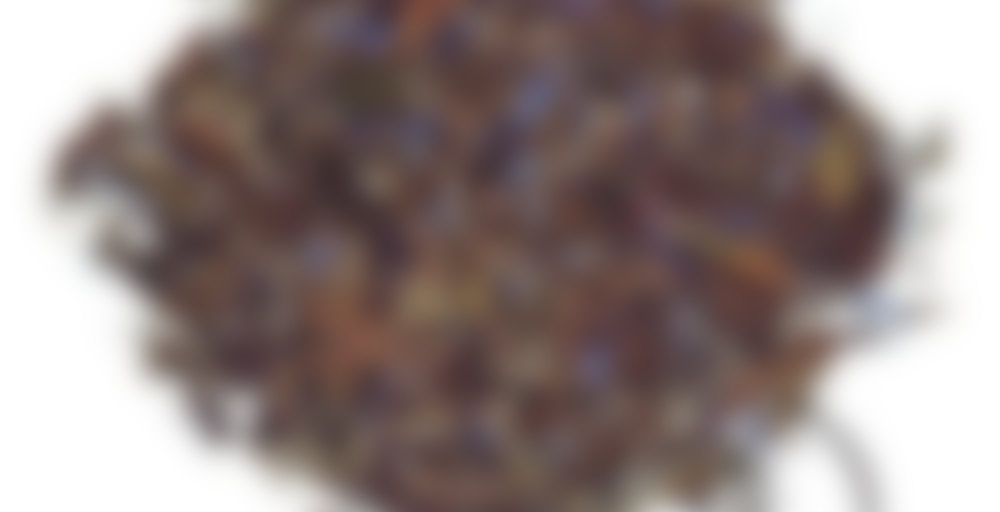 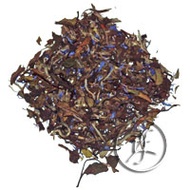 Natural Blueberry flavoring combined with a high quality white tea makes this tea blend one of our most popular! Light and fragrant, the taste is delicate yet satisfying. Never bitter or overly strong, you can enjoy this tea any time of the day.

Sipdown: I cold brewed the rest of my package of this.

This is a nice light blueberry white tea. Nice and refreshing. I don’t see any blueberries in here so that is a little disappointing. This is good, but I think DT’s White Tiger is similar but superior to this blend. I am lowering the rating a bit.

I agree. After trying DT’s White Tiger, this is kind of eh.

A sample from the original sample order. It was in my “white tea” box, or rather carton, and as I’ve mentioned I seem to have a hard time figuring out when to drink white teas so they tend to get short shrift. I’ll be trying to make it up to them over the next few days.

I’m not following the TeaFrog directions. Instead, I’m using the Breville suggested temperature and steeping time for white tea.

In the packet there is a smell that could be blueberry. It’s definitely fruity, and it also smells vaguely like incense. The leaves are stupendously large and twisty, with (my favorite) cornflowers very bluely strewn through the mix.

The tea aroma definitely has a blueberry note, with that incense one as well. It’s slightly wine-like, too. The liquor is a gorgeous tawny gold color.

Yum. It reminds me a little of the GM Persian Melon white tea, mostly because it’s a flavored white, I guess. But it’s different, too. It doesn’t have the fermented winey note in the taste that the GM had. The tea base is earthy rather than winey. It definitely tastes of blueberries, though. It’s got much more berry flavor than the only other (somewhat) blueberry I have to compare it to, Tazo Berryblossom White. I eat a ton of blueberries, usually with breakfast cereal, and this has almost the same aftertaste as the real thing.

Though I hesitate only because I am having trouble finding time to drink the white tea I have now, I think this one is a keeper.

Yeah, there appears to be quite a variation in opinions of what the steeping temp should be. I have basically given up trying to get it right. Lol.

Hmmm a good blueberry tea! I might have to try this one.

I’m always up for a blueberry flavored white tea!

This is the first time I’m trying TeaFrog’s version and I must say it’s lovely! It’s a moderately flavored white…not overly so. Plump Blueberries with a hint of floral taste.

I already know this would be good iced too!

I like it, and I’m off to write a review for it on Tea Review Blog!

I thought I’d try the rest of my sample iced. I definitely prefer this hot, but I was so sure it would be even better iced! I find that the tea base gets a little too astringent and the blueberry gets lost in it. Perhaps I cold steeped it for too long, but either way, I can tell that the blueberries don’t have a chance. Oh well.

I’ve had Blueberry flavoured teas which did not taste of blueberry at all. This is not one of them. I don’t know how it tastes hot, as unfortunately I steeped it and then forgot about it for 3 hrs, but it’s great cold. There is a definite blueberry taste that reminds me of blueberry pie filling (it’s been a looong time since I had that). Very sweet and tasty. No sweetener required here.

I’ve been looking at these guys as a potential order sooner rather than later. Good to know the blueberry is a decent one to start with

I really like this one and their Coconut White so far. I’m hoping I’ll find a few others I enjoy, so I can justify another order. I only got sample sizes this time.

This was exactly as it purports to be. A blueberry-flavored white tea. Ingredients are White Peony, cornflowers (for show), and natural flavors. (Or “flavours” if you’re Canadian like the company.) It brews up like a normal white tea but retains a loud blueberry presence in the aroma. Same goes for the taste. This does not – I repeat, does not – need to be sweetened. It tastes like fruit candy on its own. If you’re looking for subtlety, don’t look here. If you want BERRY! This is your cup.

The first thing I noticed was the beautiful blue flowers interspersed into this tea. They definitely added an enjoyable element to the presentation. Following the suggestions of the package, I steep this tea for two minutes, using three teaspoons of leaf (in a two-cup teapot). The water was heated to the point where small bubbles were forming on the bottom of the kettle.

I am really impressed by the aroma of this tea. I have drunk a few blueberry white teas before, most of which tasted immensely of blueberries, but in an almost-artificial manner. This tea is different. The blueberry flavour does not jump out at the drinker. Instead, it meshes well with the flavours of the Pai Mu Dan base. The blueberry flavours are everywhere throughout the tea, when it is first sipped and in the aftertaste, but the flavours do not dominate. Thankfully, they also do not underwhelm. It may sound like this is a lot to say to merely describe the way in which this tea is well-balanced, but it is my opinion that this tea deserves the accolades. I really enjoyed drinking this tea. It is indeed worthy of the 93/100 I give it on my personal enjoyment scale.

Ok, last entry about this tea! I can’t help it, this is FABULOUS cold-steeped. I left it in the fridge for about 11 hours and it’s not at all bitter or astringent! So light, so tasty…this is part of my arsenal to get me through this night shift on no sleep (peppermint amour and vanilla oolong are my backups). Om nom nom. Upping the rating due to iced excellence!

Jamies Review: “I got this sample from Teafrog and it lasted me all of two days…”

Read the full review at: http://www.itsallabouttheleaf.com/380/tea-review-teafrog-blueberry-white/