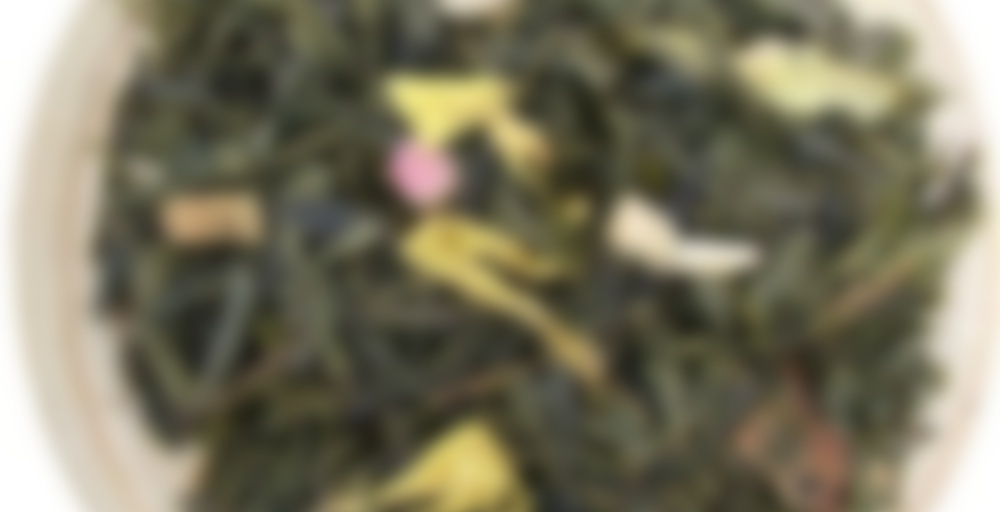 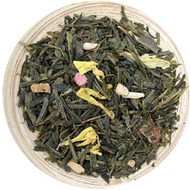 Real strawberry and rhubarb pieces decorate a lush bed of organic sencha green tea, bringing together a tasty mix of two summer fruit favourites. Sprinkled with sunflower petals this blend is sweet, smooth, and amazingly fruity! Strawberry Rhubarb Sencha is one of our favourite green teas to make iced tea with.

Courtney was kind enough to share this with me a couple weeks back and I had not gotten around to it yet. However, today I woke up in the mood for greens and so this made it into the gravity steeper.

After the Bella Berry, I worried this would go the way of potpourri but I was pleasantly surprised. I only brewed it for about a minute and what I ended up with was a very delicate tea with a hint of strawberry. I am not picking up any rhubarb but I am enjoying this nonetheless.

Thank you Courtney for sharing this with me :)

Another nice fruity green! only that is all I can really say about it.
Two good steeps and then the third lost flavour, and I can’t say there was anything specifically strawberry but I did get a hint of something unique, which could have been the rhubarb.
I doubt I’d buy this again but it was lovely nonetheless.

Thanks Courtney for the sample of this tea.
This is an ok fruity green. It’s not quite strong enough for my tastes, and I’m not sure sencha is my favorite green base.
This is slightly sweet (strawberry), slightly tart (rhubarb), a little bitter green.
Thank you for the opportunity to try this Courtney – nothing really wrong with it, but also nothing really special. Just ok for me.

Thanks to Natlynn for this sample! I needed something with a little less caffeine but didn’t want want to go completely with out caffeine. I learned how to reset the Breville from F to C. Ok, I should have looked at the directions first instead of just pressing buttons randomly, duh:) The liquor is a lovely red, the dry leaf is fruity, the aroma in sweet and fruity with no sense of green tea. Which is ok with me. I didn’t sense the sweetness in my first sip, I added a little sweetener and was very happy with the result. Fruity with strawberry and maybe a little rhubarb (?) the overall taste was fruity, but one should expect that from the name.

I was wondering why you thought there would be caffeine in this until I realized I don’t own this green tea by Tealish. It sounds like you may have had Strawberry Rhubarb Parfait by DAVIDs, sorry if I labeled it wrong.

And it also explains why I was still so tired … Again, duh!

I adore how this tea smells dry. It’s so light and fruity and just utterly makes me long for spring. Once brewed there were definite scent notes of strawberries and fruit as I pulled out the infuser, but when I sniffed the leaves and the pot, I couldn’t figure out exactly where they were coming from since neither seemed to hold them.

The tea itself is a beautiful light yellow-green when brewed, and is a delicate flavour on first sips. As I continued through the cup I started to get the feeling in my mouth that I sometimes get with extremely perfumed teas, or ones with a lot of artificial flavourings. Overall a nice tea, but I’m not sure if I’ll restock.

In keeping with my overall opinion of Tealish’s flavoured senchas, this was nice. I was a bit underwhelmed on first sip, but then the subtle flavours grew on me. Sweet strawberry and more earthy rhubarb were both detectable, and blended really nicely with the green tea. I don’t know if it’s something I’d reach for often so I’m thinking I won’t buy any at this (over-inundated with tea) point, but I did enjoy it.

I wanted to make a cuppa today!

This is actually a pretty big deal. At a certain time during the month – if you know what I mean – I don’t want tea. It’s weird. I just don’t want tea. Black, green, herbal, whatever. Unlike every other foodstuff in existence, I don’t want tea. So when I thought “Hmmm, I could do with a cuppa . . .” I was overjoyed, as its been almost a week of tealessness.

That said, the first half of this cup was delicious.

The second half of this cup was bitter and oversteeped, since I ended up with almost a teaspoon of sediment in the bottom of my cup that kept steeping.

Ugh I hate when that happens!

Cold steeped this, not impressed. It tasted bitter and like an ordinary green, I didn’t get any taste of strawberry or rhubarb at all. Sadness. It was alright, but I think I’ll save it for the wife, who likes it hot.