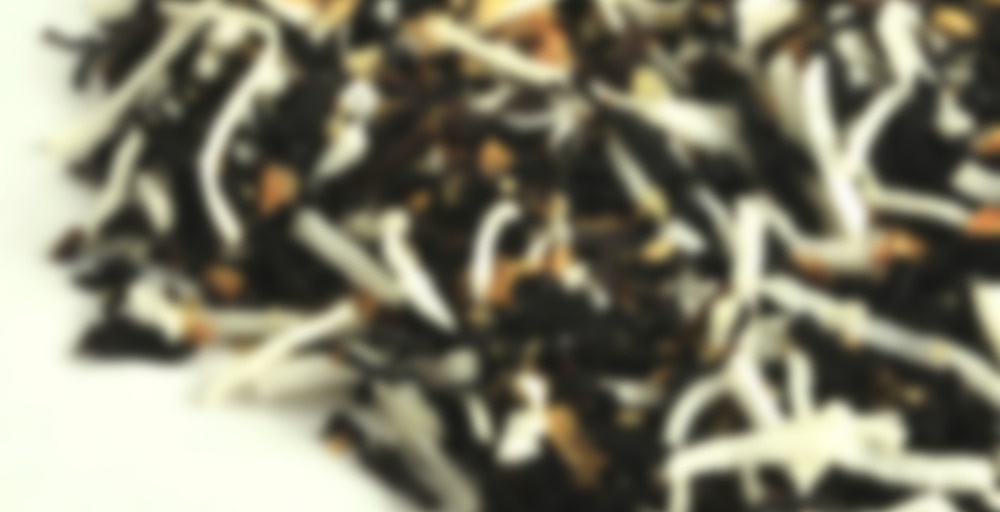 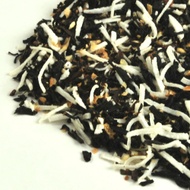 Sweet coconut and tart key lime bring the cool refreshment of the islands to your cup.

A crowd favorite at the 2010 World Tea Expo, our Key Lime Coconut Black Tea is the first in a new line of flavored/blended teas that use all natural (not natural identical), organic or essential oils for flavoring.

OMG. The dry leaf smells soooooo good. When I was little, my grandma would buy key lime pie from the store every time I visited her – I don’t remember the brand but I think it came in a yellow box. Anyway, she did this every visit from before I was born (though okay, then the pie was for my dad) until that pie was discontinued (or the area stores stopped carrying it) when I was around 12 years old. So key lime to me equals visits to grandma. And the dry leaf smells just like that pie did. Like exactly. Makes me feel like I’m at my grandma’s house.

The smell of the steeped tea isn’t quite as obviously key lime pie-ish but it’s noticeably key lime. There is key lime then a bit of creamy (which I think is the coconut ‘cause I’m not picking it up anywhere else) and then tea. I have a feeling that drinking this tea will be disappointing simply because it will not be an actual key lime pie bought by my grandmother.

Okay, it officially does not taste like I’m actually eating pie, but it does taste like key lime pie (if that differentiation makes sense). It’s not as shockingly and heavily flavored as the key lime pie of my memories, but I can’t not think about key lime pie as I drink this. I know it’s supposed to be key lime coconut, but whether it is the actual taste or just the mental key lime pie association I have going on, the coconut just reads to me as the creamy topping on the top of a pie combined with the sweetness of the graham cracker crust. The lime is the most noticeable thing – it’s very fresh tasting, crisp and sweet with a faint hint of tart. The actual tea taste is very subtle – it hides behind the lime most of the time except when I just hold the tea in my mouth for a few seconds. And even then it’s still pretty quiet and non-distinct. It might also lend a bit of the graham cracker crust feeling/taste, I’m not sure.

Figuring out how to rate this tea is tough. Because, quite frankly, I love it. But I love it because it tastes like key lime pie and that is a taste that has a lot of happy childhood associations for me and I know that is influencing me. I just can’t quite figure out how much I would love the tea if it didn’t have those associations. Would I be disappointed that it’s not strongly coconut? Would I be sad the tea taste isn’t stronger? Or would I say, “Hey, this is a kick ass key lime tea!”? I dunno. If this were flavored after a pecan pie (which I didn’t like until I became an adult), I have to think I’d still love how the flavoring was done. The flavoring is so nice that I think that, if Lupicia did key lime pie flavored tea, it would be very similar to this (which, considering how well I think they typically do flavored teas, is a big compliment). So thinking about it that way, I can’t think that I’m giving this more than 5 or 10 happy childhood bonus points. Which means, yeah, good tea.

Too funny I was just looking this up to review it. I loved it too. :-) Yummy, I want Key Lime Pie now too.

Yummy, yum, yum! I loved this one. It was like a pie in a cup. I even re-steeped it and then results were just as pleasing. The lime tastes so fresh and juicy. I really need to try this iced but it was a sample I received with my order so I need more. I do highly recommend it.

Rachel!!!! I got your package today! Thanks so much!!!! This is really something special right here…YUM…It smells like Coconut Cookies with a little lime and the taste is excellent…coconut and key lime…creamy but tangy! The infusion color is pretty light brown which kind of surprised me…but this is the complete package right here!

Thank you to TeaEqualsBliss for sending me a bit of this tea.

Yummmm! I didn’t see this tea on the Teas Etc. website, I don’t know if they’re still offering it? Anyways… it is delicious. The lime flavor is well-defined, the coconut is softer but the flavor develops as I continue to sip. The overall flavor is smooth and delicious. YUMMY!

Another awesome sample from RachanaC – iHeartTeas. WOO Thank you! The leaves looked so tempting, and I knew I had to try this today. The leaves were wet or damp-looking to me. There was a mix of green lime zest and shredded coconut and black tea. The lime and coconut scents predominated this mix. I couldn’t really tell what color this was since I mistakenly used a dark blue mug!

The lime was very strong in this brew. It is tart and has a sharp note in it. There is barely any coconut in this. This is tart just like a key lime pie. I love these tropical blends! There is a sweetness to this tea, as well as a bit of creaminess to it. I’m not sure what it is though, but there seems to be a strange chemical-like taste to the aftertaste. My mouth doesn’t seem to like it too much. Good tea overall! Probably not my thing. I am curious to try this cold!!! :)

not gonna rate this because it smelt so foul I couldn’t even drink it.
I bought this a long time ago from iheartteas & it was stored in less than optimal conditions.