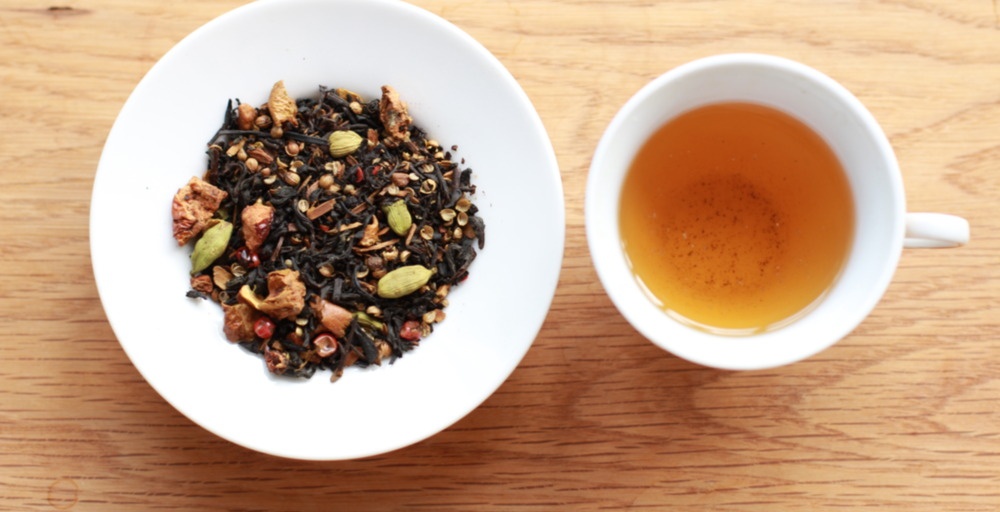 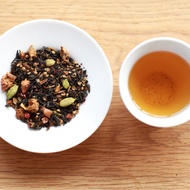 This is very spicy, but also very thin on the ‘black tea’. I feel like its probably 80-90% herbal with a few leaves of black tea thrown in. Even with that, I prefer it with milk. The spice is heavy scent-wise, but there isn’t any heat to it when drinking it. I would have this again for occasional drinking.

Matronly, thin and disgusting.
Sounds more like a description of your mother in law than tea. However, this is not tea… its potpourri with some tea in it.
I do not like flavored teas, but felt obligated to try it as it was sent to me as part of my Steepster Select membership… which so far has yielded nothing I have enjoyed, but that’s a different story.
The reddish brown color of the cup is inviting, however the aromas of toffee, butterscotch and caramel remind me of walking by Garrett’s Popcorn in downtown Chicago around the holidays… which is not terrible at all, when that is where you smell it. The taste profile is better than the aroma, but not by much… sweet peppercorn and cardamom dominate, with hints of citrus (orange), which is supported by the coriander cinnamon notes and closes with a decent astringency, which may be its savior. The actual black tea flavors are all but completely washed away. Overall the mouth feel is thin and the finish, although lasting is a bit minty, soapy and disgusting… like the smell of one of those candle-potpourii-soap shops in a mall has been jellified and you brushed your teeth with it.
Now… with all of that being said, this is far less offensive than other flavored teas I have had, and I know that some people love it and I am not saying they are wrong for enjoying it (some people also like sangria over wine – cough)… this is just my opinion and an honest review of the product. Now if you will excuse me, I think my cats stole my yarn and I need to finish my knitting for the holidays. Here kitty kitty… haha

This tea smells really nice. I could enjoy that while the tea was still too hot to drink!
I appreciate the spice, striking the right balance between asserting itself and not being overpowering. The fruitiness is a nice complement to the spice.
This tea reminds me of Christmas, although that might be a result of the trauma of seeing Christmas decorations already on display in stores. A solid tea!

This is a colorful mix. There are whole cardamom pods complete with their little stems, dry orange peel, and red peppercorns in a black tea.
You gotta be ready for spice and orange-cinnamon to drink this. I had opened it yesterday and it was more than I wanted to tackle lol so I planned when to drink it.
It smells spicy and orangey.
I brewed one cup of this and let my water cool down to brew some green tea. I drank all of my green tea then this one had cooled down to where I could really get the flavors.
This is very spicy, orangey, and cinnamony smelling. It smells like those holiday pinecones at Walmart with the cinnamon oil on them. I am scared to drink it lol (I like TeaSource teas though so I know it will be ok).
Flavor is orange and cinnamon with a little bit of cardamom (I had two pods in my teaspoon). It is very much like an herbal tea to me,,,I don’t taste the black tea at all and the liquor is a clear golden color.
This is not too bad, definitely one for holiday time.

From the Steepster Select Box; October, 2014