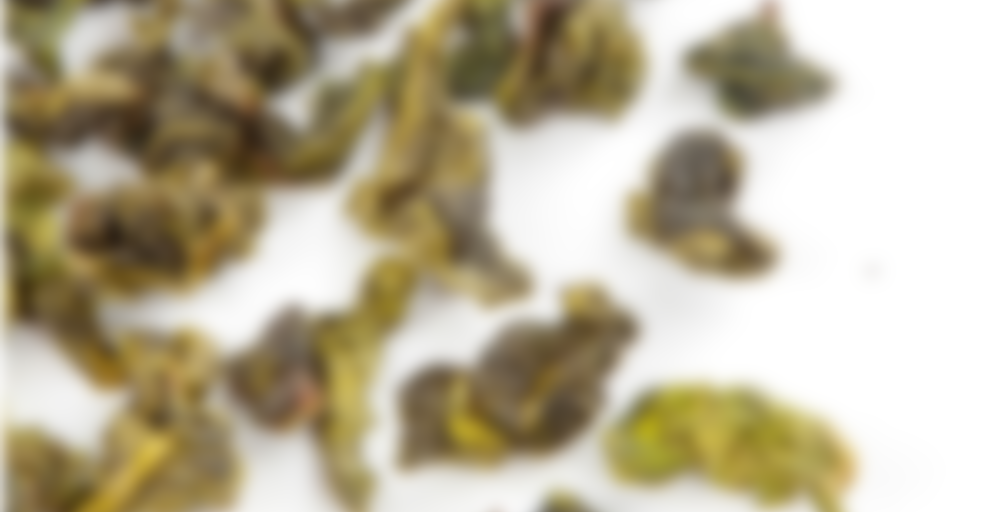 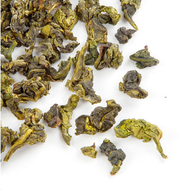 Health Benefits: Being lightly fermented, contained high amino acids, vitamins, polyphenols and antioxidants. These combine into a tea that reduces cholesterol and helps reduce hardening of the arteries, and so can help reduce risks of heart attacks. The antioxidants it contains can also help guard against some forms of cancer, and also help fight the affects of aging and bacterial infections.

This is my second Tie Guan Yin, the first was from my local farmer’s market. I’ve been wanting to get into oolong, and I think I’ve found the first that I truly like.

This oolong is fresh and highly floral in a way that reminds me so much of spring. (Which is a little depressing in November, I have to add.) The flavors remind me of gardenias, honeysuckle, and jasmine. There’s also a note of sweet, clean hay.

It still has that nutty oolong flavor, but it’s mostly in the scent. At first I was a little nervous, since the vegetal scent was so strong. But no, after a little honey, this is lovely and satisfying. I’m going to have to start trying oolongs to Teavivre’s brewing instructions, I think.

Why not? Honey is delicious.

You are correct. I eat tsp of YS Eco Bee Farms Antioxidant Power Honey everyday. It’s a combo of buckwheat, forest, manuka and multi floral. And Raw. I just think all of those flavors that you found existing in tea were beautiful. I feel the honey would overwhelm them.

Well, I didn’t sweeten the whole pot. I’ll try the next cup without honey and see what happens…

And my apologies. I do not want to appear to be a tea snob. A purist. Yes

THE ONLY TIME i ADD SUGAR OR HONEY-RARELY AT THAT-IS IF i.M STUCK DRINKING TEABAG TEA. {Blasted caps} :\

There you have it… my first reaction. Now lets examine this more calmly….

No but really, this is some great tea. I received it today, my first ever order from Teavivre. The tea was packaged well. First I opened the big bag and found many little vacuum sealed bags inside with about 7 grams of tea in each. I took out one of those vacuum sealed bags and popped that open to reveal beautiful pearls of green oolong tea in another little plastic bag. I popped that little bag open and smelled the aroma. Aaaahhh… Vegetal, grassy, spinachy… yummy! It smelled great!

I used 2 full teaspoons… about 6 grams of tea in 8 ounces of boiling water for 1 minute. The result was pale yellow liquid with a strong floral scent. Simply divine… If it tastes the way it smells, I’ll be in paradise.

Yes it does. It tastes wonderful… Slightly vegetal and very floral at the same time… I detect orchid and jasmine notes. A tiny bit of astringency tickles my tongue towards the end of the sip and I find that lovely.

I’m enjoying this very, very much.

a quick note on the fly here.

i stuffed this entire immense sample into my steeping basket. it was excellent!!! lychee notes, bamboo notes, very smooth.

lovely clear steep, tiny bit of sugar added. will buy for sure…. and back into the craziness i go. (haven’t even had a cup of tea yet today!!!)

Here’s to hoping the craziness settles down some.

nope! the day stayed completely mad! i have midterms in less than a month too!!!!! i am one hiccup away from being a spaghetti monster, lol!

This is my first experience with any Tie Guan Yin. So what happens now? Do I get inducted into the Brother and Sisterhood of Tea? Am I knighted, given the Order of the Dragon? Any of that? No?

Well, I like this anyway. I was surprised opening my oolong sampler pack from Teavivre when this one was vacuum-packed amongst the other regular-looking samples in the normal Teavivre large zip pack. Another surprise as I opened the sample itself: it was in yet another smaller clear plastic pack inside the foil pack! You can tell they wanted to take care of this tea. It already has a scent of cooked vegetables, artichoke, I think, and that’s when dry! I can also pick up a little sweet floral and a roasted/fired scent.

As usual, I followed Teavivre’s recommendations of using the whole sample (7g) for 200-250ml of boiling water and steeps of 1, 2 and 3 minutes.
1st steep: The wet leaf is strongly scented: buttery vegetables (artichoke and long-cooked greens), vanilla and orchid. In the cup it’s a light yellow-green and has a broth-like feel to it with a slight astringency. I get flavors of buttery vanilla and orchid with notes of vegetable and mineral.
2nd steep: The leaves pretty much filled the normally generous-sized infuser basket in my teapot, so it was a little tough to judge how much water I was pouring in. As it turned out I poured just right. It’s now a golden color in the cup and feels lighter. The astringency is stronger this time, but not too strong. I don’t get vanilla this time around, but it’s still really buttery with orchid and vegetable flavors. The mineral note is quite a bit stronger too, taking over much of the middle and finish of each sip. That’s not something I’ve had so strongly before, at least not that I’ve noticed. This is a mentally-awakening cup of tea, and that’s always a good thing!
3rd steep: Check it out! I actually got to a 3rd steep! I actually turned over the leaves in the strainer, moving the ones on top to the bottom so that the water would reach them better. I think as a result, this cup was very much like the 2nd steep.
4th steep: I can hardly believe I’m writing this. A fourth steep! Thanks, ashmanra for the commission comment below. :) But everyone, given my track record for not being able to take teas to even a third steep, I think I deserve at least a “Most Improved” ribbon! I had this cup with dinner, so I wasn’t focusing on it so much. But it was still noticeably floral and buttery with the mineral center, even though it had a thinner feel this time.

I liked this. I had read about Tie Guan Yin before, and notes of iodine, mineral, salmon and flint were mentioned. It didn’t sound too appealing to me, but everyone and his dog has had several different TGYs in their tea logs, so I had to try it. Since I got Teavivre’s oolong sampler, I chose to have this organic version first because the “Monkey Picked” version looks like one I’ll like even more. Now I’m really looking forward to it!

Some of y’all need one of those funky Girl Scout sashes to hold all your badges ;)

After having the Oriental Beauty, I was expecting Iron Goddess to be a darker oolong too, but it isn’t. It is a delightful green oolong. I don’t think I got the water hot enough on the first steep, but I’m on the second steep now after eating a big meal of pork fried rice with fried wontons.

The smell is wonderfully floral. It reminds me of a field of wildflowers in bloom. The taste is light and floral (not surprising). It is subtle and it does not remind you in any way of perfume. I know a lot of people worry about floral teas tasting like perfume.

This steep was brewed for two minutes and nothing has changed from the first steep. The flavor is just stronger. It is perfect to have after this type of meal and I will probably be drinking pot after pot of it tonight until I am done with it. I will update this note to say how many steeps it took me through tonight with my little two-cup pot.

Edit: It has lasted me through about four steeps in my french press. (8 tea cups) I can tell that the fourth steep is a little weaker than the third steep so it will be the last steep for me tonight.

This is pretty good. I opted to have it iced as it is pretty hot here today. I found the tea to be very smooth with a nice hint of floral goodness to it. It also has a great buttery quality to it too! Very refreshing on this hot Summer day.

Thanks to Teavivre for providing me with this sample to taste! And a generous sample it was, I’ll be drinking this one for a while (spoilers: luckily that won’t be a hardship!). For someone who loves green oolongs, I haven’t tried very many tie guan yins. It’s basically been the two Verdant pickings and one from Harney that I tried in their tasting room, but I don’t think I really appreciated oolongs when I had that one as much as I do now. So I’m really curious to taste this one! I’ll be trying a lot more oolong varietals over the coming weeks, which I am also excited for.

The dry leaf on this one smells lovely, with nice floral notes and a good “greenish” base. I normally wouldn’t steep an oolong (especially a green oolong) at boiling, but that’s what the package said, so I did it. The liquor is a nice medium greenish yellow, and it has a great scent. I feel like it’s getting harder for me to describe that scent over time as I come to associate it with green oolongs because it ceases to smell like anything but a nice green oolong to me. But it’s that fresh floral/buttery/creamy/sweet aroma.

I have to wait longer than usual for this one to come down to drinking temp, but early hot sips yield a pleasant leafy flavor with a light sweetness and some magnolia-ish notes in the aftertaste. As it cools this flavor profile continues, with the leafiness growing in intensity. The florals are pretty prevalent as well, while the sweetness just kind of lingers lightly at the back. I don’t get a lot of buttery or nutty notes with this one, but I do love a very floral oolong so I’m willing to forgive it those characters. Definitely a pleasant TGY that I really enjoy drinking.

I haven’t tried mine yet, but maybe tomorrow.

This is another sample received from either Nicole_Martin or Fuzzy_Peachkin at one of the NYC meetups. This is quite sweet and floral, but not offputtingly so – I find that some very green oolongs are just too strong on the honeysuckle front, but this one had enough savory and vegetal notes going on to keep things balanced in a way I was able to enjoy. Green TGYs aren’t my favorites, but this is certainly one of the nicest I’ve tried.

this one was great!

This tea is grassy, slightly sea-weedy (but in a good way) and buttery. It tastes fresh and spring-like. As it cools it gets more grassy and leafy. It loses the seaweed flavor altogether.