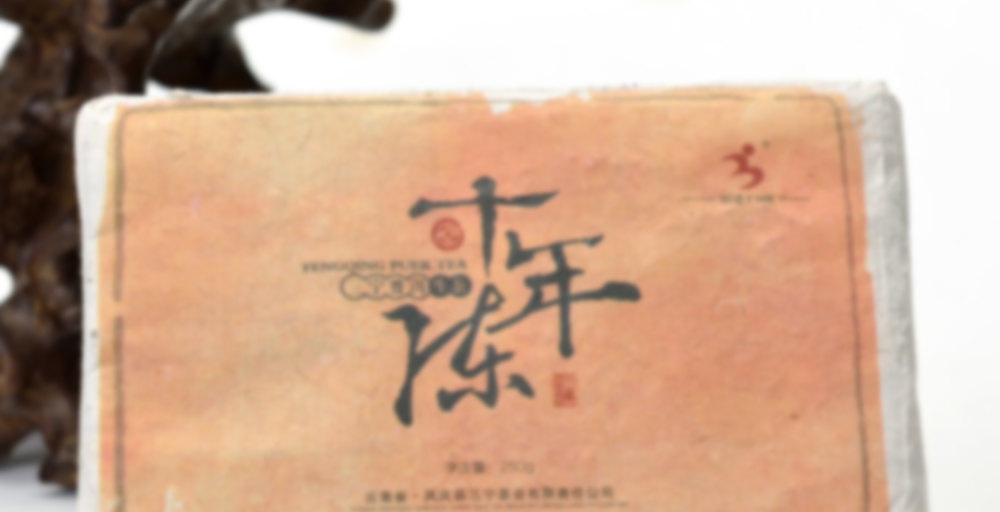 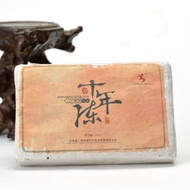 Ingredients: compressed, square, the buds coated white
fuzz and twisted with leaves are visible on the surface

Taste: compressed, square, the buds coated white fuzz and twisted with leaves are visible on the surface

To enjoy the full-bodied taste of this brick tea, it is strongly recommended to steep this tea 3 or more times. Less bitterness lies in its initial taste and the rich-mellow taste intensifies gradually and at the same time the sweet note also becomes more noticeable with infusion increases.

This tea merges nicely sweetness, smokyness and fruity sourness. Not super complex but still good. The fruityness mostly reminds me of dried apples and plums (like the dried friut my grandaunt used to make for us) that goes nicely with the smoke.
Just the drying mouthfeel in the first 2 steepings was a bit offputting but from the 3rd on cup it was gone or rather soft and velvety. Also the smokyness comes more foreward und balances the strong sweetness from the beginning.

With another sample I did the following session: 1 rinse/ 25/ 20/ 20/ 30/ 30/ 50/ 50/ 60
That way I extracted much more bitterness and mineraly notes that merged in the 4th steeping into a flowery darkness. But with shorter rinses I enjoyed the tea way more and also longer.

From my beginner’s perspective this tea tastes quite similar to Teavivres 2006 Fenqing Raw Puerh Tuocha and also a bit like their Fenqing Ancient Tree Spring Chun Jian Raw Pu-erh Cake from 2012 (although that seems to be more bitter and spicy). I have to do a more in-depth taste test with these three teas!

This is my first time drinking both pu-erh, and gong-fu style using a gaiwan. I have to say that I enjoyed both. This is a good thing, because now I have opened up a both a whole new category of tea and a new brewing style. It’s also bad because my wallet is going to suffer deeply.

First, some notes on brewing gong-fu style: I loved it! I currently only have a small set for one person, as I’m the only person in my relationship who loves tea enough to brew this way, but I plan on eventually getting a full set so that I can serve to others. It’s great though… I have a glass teapot that I keep full of hot water on top of a warmer that uses tealights, and that way I can sit down in front of the TV and have small, delicious saucers of tea all night long without getting up. It’s definitely one for when you’re setting in for a quiet evening of tea drinking and relaxation; not for when you’re in a rush.

Anyway, the tea. I didn’t know what to expect from pu-erh but it this one was lovely. It was earthy, slightly bitter but not too much or in an unpleasant way, and not as strong or fermented as I was expecting.

Maybe I was brewing it wrong (it’s my first time and I just used Google) but I don’t really care, because I enjoyed it thoroughly. Perhaps I didn’t brew it strong enough, but for me the taste was spot-on.

I washed the leaves first, then went for multiple 15-20 second steeps. Eventually I increased this to about 30 seconds. All in all I must have had 20 cups.

Now I just have to find some more tea to brew gong fu style. What is annoying is that the day before I tried this method I placed an order on Tea Vivre, so could have added more. Oh well, looks like I’ll be placing a third order soon!

My wallet is telling me to put the proper set on hold for now, though…

This was a very potent puerh. The brick gives off a strong scent of intense tobacco, menthol, and dense wood. I warmed my yixing up and placed what I had inside. The scent opens up into mild smoke, savory tones, and wet wood. I washed the leaves once and began brewing. The taste starts sweet with medium smoke, and it is very meaty. The brew continues in this manner, and it is decent tea. I note some nice neck prickling as the qi begins to sink in. However, the tea grows very strong and bitter with intense smokiness. There is still a sweet aftertaste, but the harsh notes overwhelm me. Although, I do enjoy the qi. There is a nice head pressure and heat along my body; this is a high energy tea.

This is my first puerh from Teavivre. It’s relatively new tea territory for me having tasted half a dozen or so puerhs so far. I picked this up because I wanted to try an aged sheng. . My first few cups were delicious, but later on I had to fight through some serious bitterness.

I used just under 8g of tea in a 120ml shibo for this. The dry leaf had a faint smell of sweet earth and incense. It was noticeably less intense than other sheng puerhs I’ve tried. Wet leaf smelled of wet wood and tobacco. Normally I use very short steeping times for puerh, but increased my steep times as recommended by some reviewers.

After a rinse, I steeped it for about 30 seconds using just under boiling water. It tasted of sweet leather with slightly smokey undertones. A second 30s steep was a nice woodsy and wet forest like flavor. The third infusion was for 35s at boiling. Earthy sweet with a little bitterness beginning to creep in.

The next 4 infusions were pretty rough. Encountered lots of bitterness forcing me to reach for some sweets to cleanse my palette. I had to chuck the 7th steep and call it a day because the bitterness became just too much.

Overall, I quite enjoyed the sweet, complex taste of the early steeps but wished the flavor had carried over to the later infusions.

Lower the temp 10 degrees, and take 5 seconds off the brew time. Even at 10 years its still kinda green and bitterness can creep in.

This is interesting, I always thought puerhs needed hotter water. I’ll tweak my brewing parameters next time and see how it goes. Thanks for the tip.

The older it is the more it needs the heat, a young raw is still pretty green, and you can get away with lower heat. I had to do this with the immortal monkey raw min tou from yunnan sourcing, it was small very green leaves and the first time I brewed it, bitterfest, I lowered the temp to about 190-195 and shortened the steep a little and it was much better.

A lovely sheng pu-erh for yesterday, when the weather certainly couldn’t be enjoyed. That means it’s time for a three steeper! Ten year old sheng seems to be my favorite. (Or maybe most of the sheng from Teavivre is what I prefer…) The fragrance of the dry cake is slightly smoky/barbeque and there are hints of that in the flavor. But mostly, following my golden rule of raw pu-erh steeps: 30-35 seconds per steep, the flavor is very sweet for a sheng! So sweet it’s almost like a sweetener was added. The sweetest sheng! It is like the nectar of some kind of fruit. Unraveled, the leaves are huge in this cake. Even the third steep is smooth, when I was really testing the leaves only ten minutes after boiling. This is a great sheng pu-erh… one of the favorites that I’ve tried, though always difficult for me to describe.
Steep #1 // half sample for a full mug// rinse // 20 minutes after boiling // 35 second steep
Steep #2 // 25 minutes after boiling // 35 second steep
Steep #3 // 10 minutes after boiling // 40 second steep

Thank you Angel for this free sample. Sorry it took me so long to get to it. This was an excellent tea. It started off somewhat bitter. This lasted about four steeps or so. Then it developed a nice sweet note to it. I am not sure if I should say apricots or stonefruits but it was good. Despite being ten years old it had yet to develop any aged flavors, good or bad. It had no storage tastes at all. It was very tasty. This is definitely one I would consider buying the next time I order with Teavivre.

When I purchase earlier in the year the pre Qing Ming green teas I overpaid the transport costs. You just showed me how to use the credit. :-)