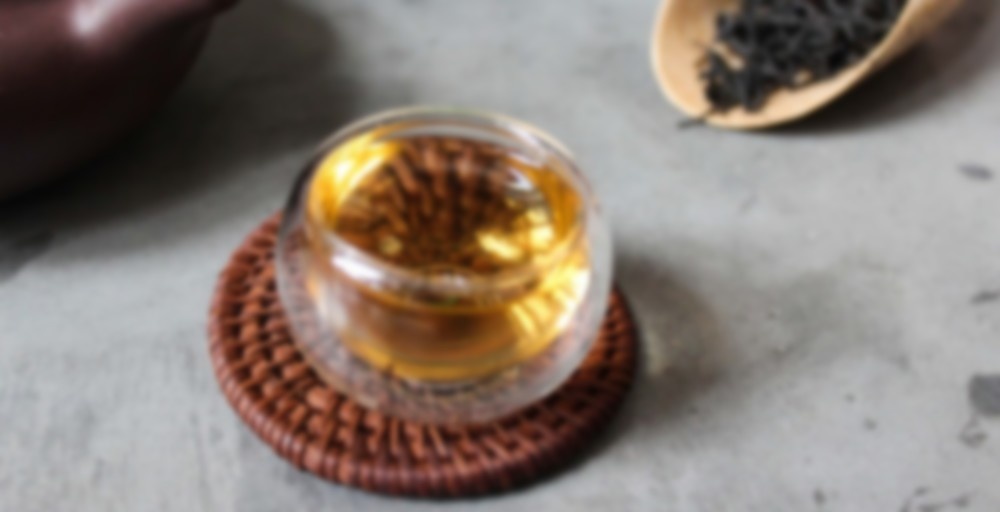 (info not yet available)

Brewed up about half of my remaining supply of this lovely black tea yesterday. My boyfriend and I shared the steeps and it remains as lovely as it always did. Lots of sweetness, smoke-tinged flavours, and lovely sweet, biscuity notes. It drank merrily for 2-3 steeps in my teapot before I had to take a break.

The rest is still sitting in my lovely little acorn teapot, so maybe I’ll try to steep it out this afternoon.

Needed some black tea recently, and pulled this one out. I’d forgotten that it has a smoky flavour, albeit milder that a lapsang souchong (or most I’ve tried, anyhow); it also has a lovely sweetness to go along with some hay notes. It’s a different sort of black, that’s for sure, but it’s pretty tasty.

Another beautiful tea. Much more subtle than almost any black tea I have tried. The nose is smokey and earthy much like a delicate pu-erh, with some hints of mandarin and lemon. The palate is also smokey and earthy with caramel, mandarin, juniper berries, lemon, and a light delicate sweetness on the finish. Changes beautifully over several steepings to reveal more fruit and a very light floral element that I just can’t identify.

Wow. This was a blast from the past. While organizing my tea cabinets yesterday, I discovered a pouch of this tea. I apparently bought it when Verdant had a sale going on a few months back and then promptly forgot about it. Naturally, I had to crack it open and give it a try. More than anything, I realized that this tea was from the Spring 2015 picking and was released to the public sometime between mid 2015 and early 2016. I did not want it to go to waste.

Prior to the rinse (I do not always rinse black teas, but decided to here. I figured that with the age of the tea a quick rinse might help it open a tad more), I was able to detect mild aromas of pine, smoke, mandarin orange, elderberry, and huckleberry. The rinse and the initial infusion brought out subtle aromas of blackberry, honey, and juniper as well. The first infusion started off with a strong combination of pine, elderberry, juniper berry, huckleberry, blackberry, and mandarin orange underscored by traces of honey, smoke, and minerals. There was also an almost sugary sweetness lingering in the background. Verdant describes it as rock candy, but that was not what I was getting. Subsequent infusions brought out the fruitiness and sweetness of the tea. The woodier, more savory characteristics faded a tad, while the aromas and flavors of elderberry, huckleberry, mandarin orange, blackberry, and honey were more heavily emphasized. I was able to better place the sugary sweetness at this point. It reminded me of both marzipan and light maple syrup. The mineral notes began to play a slightly larger role on the finish, but were not nearly as noticeable as I was expecting. Later infusions were unexpectedly smooth. I got mostly minerals and a touch of mandarin orange on the nose and in the mouth, though I could also detect touches of maple syrup, smoke, wood, honey, and marzipan.

This was a very refined, subtle tea with considerable staying power. I think I could have probably gotten away with using one more gram of loose tea. That may have provided a more intense and lasting set of aromas and flavors, but the preparation outlined above was still enjoyable. I have no clue how this tea compares to the regular Wuyi Gongfu Black, as I have yet to try it, and I also do not know if or how much this tea has faded over the course of the year. What I do know is that I found this tea to be pleasant, yet simpler and more straight-forward than I was expecting. I did not note a ton of change or anything really out of the ordinary over the course of the session. The tea lets the drinker know what to expect up front, lays everything out for them, and then fades. I prefer stronger, more robustly flavored black teas, and I guess I was kind of expecting this to be that kind of tea. My experience, however, suggested that it was not. In all honesty, I found myself drinking this more like a puerh after a certain point. Rather than looking for tons of change in the aroma and flavor components, I began drinking this exclusively for texture and overall feel. I think that is probably where I got the most out of this tea. In the end, I enjoyed this tea, but I also would have preferred something more robust. If you are the sort of person who gets a lot of mileage out of very subtle, reserved teas, then this may very well be up your alley. I think it is worth a shot regardless.

another from terri. this has a taste to it that is super familiar and yet i can’t seem to figure the word out. it’s sweet…yeah i dunno. i don’t have much else to say beyond this was an enjoyable cup :)

I’m surprised this isn’t a smoked tea because it certainly smells like one. I feel like I’m drinking a forest. The whole thing. Trees, moss, rocks, bushes. Very complex. I wasn’t expecting the smoky flavor, so it kind of took me off guard. ;)

The December TotM samples have arrived and they are all teas Verdant has never offered before, so there isn’t even info on their website yet about these teas. This is distinct from the “Wuyi Gongfu Black” on their website which they have been offering for some time, just to be clear.

This is not a smoked tea. But it is almost as “smoky” in characteristics as the Zheng Shan Xiao Zhong which the same family produces EXCEPT that this one isn’t actually smoked. You really can pick up the fact that the leaves (from different trees) are growing in the same soil, sunlight, rainfall &c. The taste of the place is really present. Something I’m enjoying more and more about having so many teas from just a handful of farms is discovering how the leaf itself shines through all that various processing and manipulating.

I have described Zheng Shan Xiao Zhong as “petting zoo” and there’s a teensy bit of that here, but not nearly as powerfully. A bright, amber tang cuts through almost as if this were a blend with assam.

The biggest notes however come right out of the write-up in the TotM box “mossy” and perhaps even a bit musty, like a humid shou pu-erh.

This is a great addition to Verdant’s rapidly growing selection of exceptional and unusual teas.