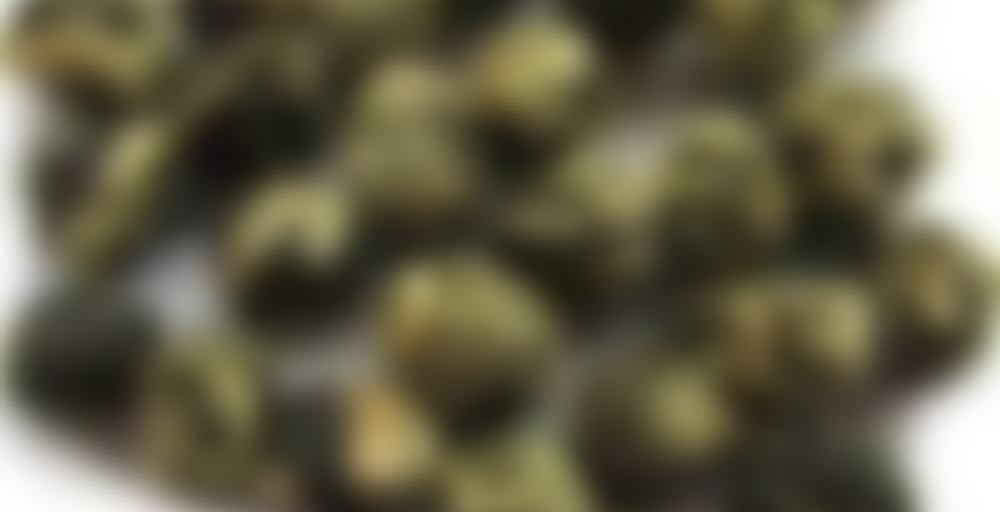 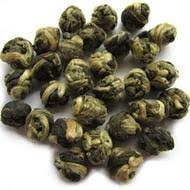 An easy drinking dragon pearl tea without the usual addition of jasmine to the pearl. It has a smooth sweet taste with gentle fruit notes, perfect for grandpa brewing.

Day 8 of Sara’s Old Tea!
This is a really smooth green tea. Should I have washed it first? The pearls really opened up for the second steep.

I get a sugar cookie flavor from this, as well as malt and vegetal notes. The vegetal notes came out a lot more for the second steep. Very tasty green tea! Thanks.

I’ve been working on sipping down a 50g package (from 2017!) for nearly a month now, pretty much exclusively as a cold brew. It takes a full 24 hours sitting in the cold water for the leaves to fully open! (I usually just cold brew overnight, around 8 hours).

Another of my old What-cha teas. Brewed western, I had the same problem I had with my black Dragon Pearls, where the leaf didn’t properly open up during the steep time (come on leaves, be in agony!), so this may have to be a tea for gong fu or grandpa brewing, as well.

What I did get from my western-brewed cup was a delicate green tea with a lot of sweet florality, honeyed pears, and a soft vegetal taste, though I can’t quite place it. It’s actually quite pleasant, considering the age of the tea and the lack of unfurling I got from the pearls. Mostly, I’ve been preparing this as a cold brew, though, since that is my main preparation method for “past their prime” green tea. This also allows me to leave the pearls in a mason jar for twenty-four hours in the fridge, which allows them enough time to open up fully, before straining. The flavor in my iced brew still has the qualities found in the warm cup, but I’m definitely getting a stronger, less delicate flavor (the floral tastes more prominently orchid here), and I’m also getting a citrus taste that lingers on the tongue. Very refreshing!

Even though there is now snow on the ground I still like to keep a cold brew in the fridge and that is likely how I will finish off this bag.

I have just imagined leaves screaming for mercy. With googly eyes.

Ha! I was participating in a Tea Quiz in a vendor “booth” (aka a Zoom room) on the International Virtual Tea Festival and one of the questions was “What is the unfurling of the leaves in the cup called?” The answer… “agony of the leaves.” I didn’t know that one! (But I did take fifth place and won a set of British boxed teas!)

oh cool, you won something! I half forgot and half was busy and half was enjoying the nice weather to “attend” the tea fest. :/

I don’t think new accounts can be made now, but if you had an account made for the event but “missed out” you can still sign into the site and watch any of the content from the “Pre-Recorded Sessions” section until January 31st!

Okay, this was the last of the teas I drank in June. Fortunately, I do not have many reviews left from July and August, so I should be able to get things caught up fairly quickly from this point forward. I recall drinking what I had of this tea the day after I finished the last of the China Guizhou ‘Dew Drops’ Green Tea, and I have to say that I found this tea to be the more impressive of the two. Both were very good, but if I could only have one of the two, I would choose this one.

Prior to the rinse, the dry pearls emitted aromas of hay, grass, malt, and corn husk. After the rinse, I detected new aromas of bamboo and spinach. The first infusion offered nothing new on the nose. In the mouth, the tea liquor presented delicate notes of hay, malt, grass, and corn husk that were chased by subtler impressions of smoke, apricot, and sugarcane. Subsequent infusions saw sugarcane and apricot make themselves known on the nose. Stronger notes of smoke, sugarcane, and apricot appeared in the mouth alongside belatedly emerging bamboo and spinach notes and new impressions of minerals, sour plum, asparagus, cream, and lettuce. The final few infusions emphasized soft mineral, cream, grass, asparagus, and bamboo notes that were balanced by impressions of stone fruits and malt as well as a faint pear-like note that came out at the very end of the session.

This was very much a straightforward, easy-drinking green tea equally suited to solo consumption or pairing with a variety of foods. I could see it making an excellent introduction to Guizhou green teas or a fantastic daily drinker for those who like heartier, less subtle green teas. I would love to see how this particular tea pairs with jasmine because I bet it would make a knock-out jasmine dragon pearl green tea. Anyway, try this one if you are looking for a regular drinking tea and/or are curious about the green teas Guizhou Province has to offer.

The first time I tried this tea, I gongufed it and didn’t like the musky, brothy flavor. But not every tea is made for gongfu and in this particular case, generic western steeping actually worked best. I dropped about 7 pearls into a 200ml teapot and brewed it for 3 minutes or so until the leaf began to unfurl. The tea had a lovely sweet incense like aroma. Soft, creamy flavor with a faintly floral aftertaste that reminded me of white tea.

I can see why this is used as a base in jasmine scented tea. The subtle flavor works well in many blends. I added a dried persian rosebud and the tea complemented the rose very nicely.

What a beautiful idea for the appropriate tea! Will try. Thanks for the tip.

Teavivre has a really wonderful pink rosebud tea. I like to add it towards the end of a session when the tea starts running out of steam

^ Thanks, LuckyMe. I still have some scented rosebuds that I purchased at our latest local tea festival. I’ll use those up first. However, I will take a look and add it to my shopping list. When I give myself permission to start amassing more teas. Because currently here I have reached the what-the-hell-was-I-thinking stage in the tea department.