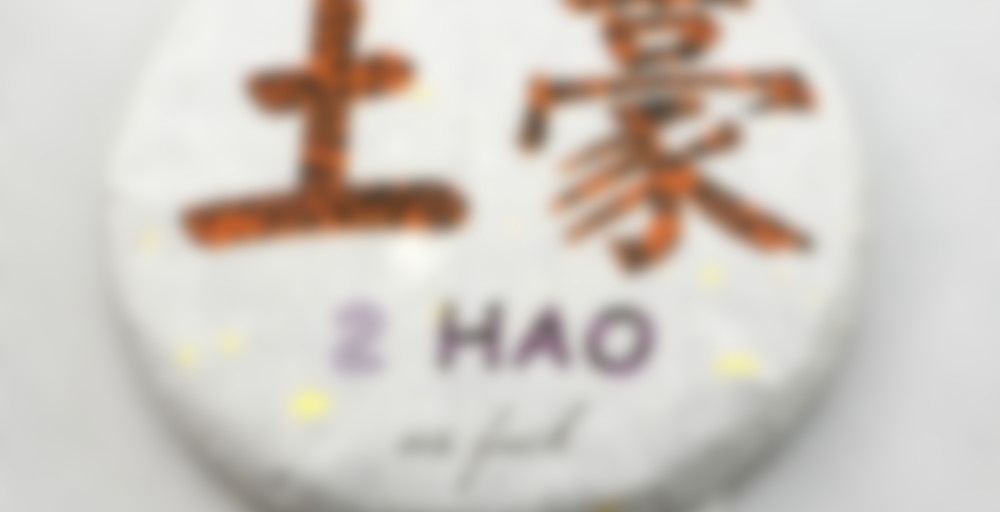 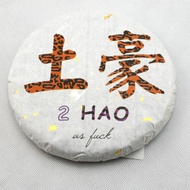 This tea is our attempt at blending a tea with character similar to Laobanzhang, without using any actual Laobanzhang material. Though Laobanzhang character is not a singular thing, and can mean literally hundreds of different things, we opted for a tea with a lighter bitterness and more sweetness and internal strength.
The cake is a commentary on the focus on brand name, fame, and authenticity. The tea itself is excellent quality. Despite not being “real” Laobanzhang, it is real tea.

Cool as a Cucumber

A powerful tea — a kick in the teeth in the best way possible. Will be interesting to witness its evolution through the years.

Just an all-around enjoyable tea, really. Not necessarily a whole lot of complexity here: predominant notes of lighter fruit (like another reviewer, I’m really not sure what, precisely), backed by some mild sweetness and a little bit of Bulang-esque bitterness that comes out more on the later steeps. Some hints of darker undertones start to emerge a bit later in the session, but they’re kind of fleeting and the tea doesn’t change all that much. It’s solidly durable, though; I don’t count my steeps, generally, but the number’s in the mid-high range. The liquor’s reasonably thick, though not outstandingly so, and the throat pooling effect is definitely there.

There’s a definite tea-drunk effect on this one, but it’s not as immediate as some; it’s more of a gradual muzziness that creeps up on you almost unnoticed, until, around the fifth or sixth steep, you stand up and realize that everything’s more than a little muzzy. This is more relaxing than I remember from some of my earlier sessions, where my recollections are of something higher octane. It’s possible that this has evolved a bit over the year-and-a-half I’ve had it, but it’s hard to say.

On the whole, this is a very good tea that’s just outside the top tier for me. It has very few recognizable flaws, but it also lacks the oomph to push it over that threshold; it’s a near thing, though, and in many ways, this is a more immediately enjoyable tea than some of those higher echelon ones. I’ve not had subsequent productions, but if they’re comparable to this, I’d definitely consider them.

Having revisited this today two years later in a vertical comparison with the remains of a 2017 sample I have lying around, I’m getting fewer, if any, fruit notes; more in the way of brisk initial bitterness with some underlying honey. There’s still a little bit of qi lying around, and I’m enjoying this very much. It’s not clear to me how much this has evolved, but the better part of four years of my storage has at least not killed this tea.

*taken from my own post in Badger and Blade’s SOTD thread.

Obviously fruity. Session to session I can’t pin down the fruit family. Is it tropical, citric and/or stonefruits? if I really wanted to be specific the stonefruits are in the smell, especially on top of the lid. The texture/acid is reminiscent of a highly sweet, lowly acidic clementine and the aftertaste and that sortve prickliness a tea can leave after the swallow is similar to tropical fruits, a similar after texture as a Dehong might impart. But I don’t drink 150 dollar tea so I can taste only fruit. More than that this tea is impressively sweet and all of these high notes are grounded to a substantially smooth, and at this point, light wood/loose fresh tobacco taste. Obviously this will age well. The texture is gloopy. The qi is rising, and will cause significant warming around the second steep with a lazy, in over your head feeling.

How has this done over a year in dry storage (average 75 humidity/temp)? Pretty well. No smoke, although only a little before. It is less obviously shengy and has lost Denny’s freshly mowed lawn taste/texture. It is quite a nice drink now for its fruitiness and overall complete package.

Any downsides? For all its fruit its fairly one noted in the mouth. It doesn’t have crazy mouth activity but rather some throat pooling. i think mouth activity is yiwu tea, throat=menghai, bulang. Its not impossible to sum this up well over the internet, which might be a downside. While not overly complex, it just does itself so well that I personally do not mind.

Brewed in a 100ml yixing gongfu pot with 5g of leaf. An excellent tea with strong character. Compared to real laobanzhang, the flavor is not quite as complex and doesn’t develop as much over time. However, the flavor of the tea is still very good, and is extremely reminiscent of true LBZ’s that I’ve tried in the past. I’d highly recommend this to anyone who likes teas which have a hearty kick, but aren’t lacking in depth.

Beautiful leaf. Solid taste. Feels like LBZ.
You should be looking at buying the 2016 version before it sells out if you want a tea that will hit hard and taste solid each and everytime. Th leaf is larger than your average quality stuff, taste wise it is semi complex and easy going, but the reason it’s so dang good is the strong feels it provides.

I bought a sample of the 2015 version. Had one session and thought “no way is this worth $0.70/g to me.” But I’ve been drinking a lot of really cheap tea lately, so maybe its charms would be more obvious if I gave it a retry.

Well, really I was thinking that I have better uses for $140 than 200g of this tea. Not regretting having sprung for the sample. Of which I still have 2 sessions worth.

I am on a quest to drink Often and MC&A err day until they’re gone: maybe after putting down 450g of $0.10/g tea the tuhao will hit me harder. After which I will give the 72 Hrs a shot.

Those teas are too astrigent and dry for me to enjoy. I like this and Repave most because they have clarity and a smooth aspect to them that allows 20 steeps of enjoyment rather than ‘I am thirsty’. I pick up astringent notes really easily so blacks and Puerh are hard for me drink; thus… High taste :/

This is a tea that makes me very happy.

It has some similar character to Chawangshop’s 2015 Hekai. But this is obviously a whole nuva level. The huigan on the earlier steeps of this tea is reason enough to love it. It has very low bitterness and astringency for a tea with such a great huigan and mouthwatering effect.
I let my dad try this on the later steeps (7+), I don’t think he was as blown away as I was, but regardless, he kept asking for more.

Got a gift of this tea from Grill, who is awesome. So… sweet apricots, hint of grass, slight pleasant bitterness with first steep; second steep slightly more bitter, third steep has gone into “way too bitter” territory for me. Four has calmed a bit. Five: I just noticed a little bit of smoke in the brew. I’m sure it was there from the beginning, but I was focused on the size of my tongue and the fact that it seems to be taking up an unreasonable amount of room in my mouth. Six: Ah, the bitterness has faded away and this tea has blossomed into something wonderful. Hello gorgeous, where have you been? Seven: la la la la la my face feels funny.
How this tea makes me feel:
https://www.youtube.com/watch?v=3NQ3kXLKfDM
Eight: Now. This. Fantastic.
Nine: …
Ten, maybe eleven or fourteen: I have never laughed so much drinking tea. Everything is hilarious right now. I’m on YouTube watching videos of screaming goats and I’m in hysterics.
10/10 would drink this again.

YouTube is awesome when you are “tea giddy” :-D

I’m finally back in town, and that means I can return to my tea table. I have missed my yixing dearly and have been awaiting a nice puerh session. This is the brew that I have chosen.

The cake consists of massive long and slender maocha. The leaves are beautiful strands of tarnished silver and aged bronze. The carry a deep sweet pipe tobacco scent. I placed a generous chunk in my warmed yixing and gave it a shake. The tobacco scent deepened into a more plum and light wood aroma. I washed the leaves once and prepared for brewing. The brew starts out as a light jade color, but it deepens to slight gold. The flavor is sweet and syrupy. I was fooled though. The liquor turned on me and went sharp and bitter. My tolerance has diminished since I’ve stepped away, so I was slightly floored by this brew. I stood my ground and continued my brewing. The flavor is a great balance of bitter and sweet. This brew caries a lot of flavor. These flavors being, a slight wood with smoke, some sweet grapes and hay. The huigan is wonderful! It takes a few steeeping to settle, but it follows well throughout brewing. The qi is what had me hooked. It begins a swift and harsh ride. My brain was racing, and my body sweating. Then, it smoothed out, almost instantly, to a light and uplifted consciousness. I loved this brew. The leaves when steeping are a brilliant green, and it kept a consistent golden colour well into brewing. This was magnificent, and it was a great way to resume my puerh journey!

Did the bitterness continue throughout the session or did it fade in later steeps? You obviously loved the tea, but I’m really sensitive to bitter teas.

This bitterness was very light and continued well into steeping. It did fade around steep eight or so. I believe if brewed with slightly lower temp (95C-90C) it should remove the bitter taste.

This is the most obviously throaty tea I have ever sampled. It produces a very noticeable ‘pooling’ feeling at the top of the throat, as if the tea were physically sitting there. If you concentrate, you can feel the tea enter your chest and expand.

Its taste is quite soft overall, but the tea definitely possesses strength that manifests in astringency when pushed. I would describe the flavor as a light floral bitterness with just a tinge of those sort of ‘barnyard’ tastes. There is a very interesting cured meat smell on the gaiwan lid that doesn’t come out in the flavor.

Huigan is slow to build, but very apparent after several steeps. Quite excellent tea.

that cured meat smell manifesting itself in weird places during Gong fu is a trademark of bulang.