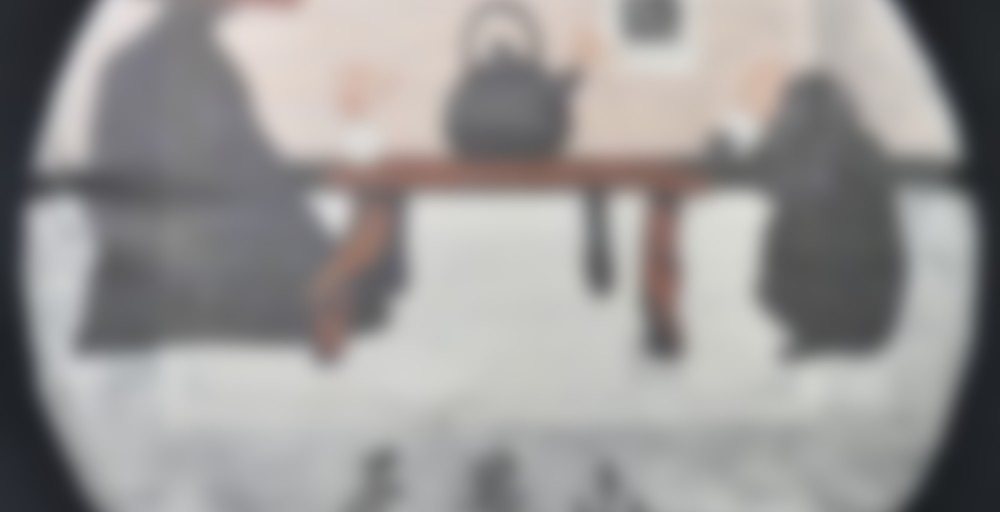 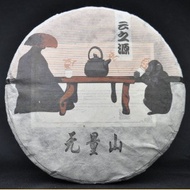 I’ve actually had a cake of this for close to a year now, but this was my first time trying it. Like is typical of most Yunnan Sourcing raw pu’ers, the compression is very light and you should have no trouble prying off leaves. Upon examining the steeped leaves at the end of the session, the leaf integrity looks very good and the leaves healthy and well processed. As these are some sort of hybrid, the leaves are smaller than you are accustomed to seeing in pure assamica.

I used 8.8g in a 130ml gaiwan and after a brief 5s rinse and a five minute rest I proceeded to do a total of nine steeps, the timing for these being 7s, 7s, 10s, 12s, 20s, 30s, 60s, 75s, and 90s. As I like to do with young, pure teas, I drank the rinse and it was strong, fruity and sweet. It had the taste of white grapes, followed by a long aftertaste of some sort of dried fruit reminding me a bit of maybe plum or raisin.

In the third infusion things were amped up. The mouthfeel was nice and slick and the tea really oily. The effects of the tea were really potent. There was an amazing, calming cha qi that slowly spread through my body and could especially be felt in my limbs. Gradually I started to feel a bit silly and slightly tea drunk. I don’t remember much about the taste as it felt irrelevant. I know it had a bit more edge, a bit more bite to it. This brew was damn good.

As I was preparing the fourth brew, my motor control was quite f’ed. Perhaps somewhat fortunately the effects did settle down as I was drinking this steep, allowing me to finish the session with a more clear head. The tea itself continued to be soft and oily, with hints of astringency, but not really. The following steep finally lost the oiliness, but the tea had a quality of going down very easily. The taste was green, with hints of astringency and maybe some slight sweetness.

The mouthfeel began to diminish and the flavors simplify starting with the sixth steep, but the tea was still very much in the easy-to-drink phase. The tea soup was characterized by being very clean tasting. I accidentally ended up pushing the tea a bit for the seventh infusion by over-steeping it a little, but this wasn’t really a bad thing as it allowed me to assess how the tea performs when pushed a bit harder. The result was quite mineral tasting, now with some minor bitterness as a result of over-brewing it. It was still very drinkable and comparable to a decent green tea with some bite to it.

Steeping number eight started to be quite astringent with still some bitterness as well, so I adjusted my brewing time conservatively for the last infusion that I did and managed to produce a green mineral taste with less astringency and close to no bitterness. The flavor profile was rather simple now, but I would expect the tea to potentially go at least a couple more steeps like this before giving out. I decided to call my session here, however.

All in all this was a great tea. Don’t let the price tag fool you, this tea performs at least in the mid mid-tier if not high mid-tier. As a fan of Yunnan Sourcing’s Da Qing Gu Shu, I’d say this tea is not as great as that one, but it’s comparable and only costs half as much, making it a great budget alternative. This will be a great tea to both drink now and to age for later. The cha qi is nice and decently potent, but not overpowering. Both the strength and longevity seem about average, the tea doesn’t feel overly thick in the mouth, but the mouthfeel is rewarding. There is some mild astringency and a hint of bitterness if pushed, both of which are considered positives for future aging prospect. I should also note that this tea is highly aromatic, with the dry leaf, wet leaf, the lid of the gaiwan, tea liquor and the empty cup all providing different aromas that evolve and change over the course of the session.

This is an incredible option for a sweet, mellow, and budget-friendly daily drinker. At $45.00USD/400g, it really can’t be beat in terms of leaf-quality. Plus, for a more pesticide-wary audience, Scott had this tea tested for residues at a laboratory certified by the EU Food and Safety Commission. This tea isn’t really bursting with complexities, but it’s still tasty, refreshing, and enduring…

The full review can be found at: https://shenggut.wixsite.com/shenggut/single-post/2017/07/27/Yunnan-Sourcing-Wu-Liang-Mountain-Wild-Arbor-Spring-2016

Brews a medium yellow. This is a medium strength young sheng with medium-low bitterness. Super strong honey aroma and flavor, the bottom of my cha hai smells just like warm honey. Other notes of green wood, clay, wildflowers, and grain/baked goods.

This is a very nice tea, especially for being on the cheaper end of YS’s 2016 lineup. It’s a shame though how pu’erh prices have gone up since I started the habit, I remember when I bought the 2012 Wuliang in 2012 it was only $25-ish.

I really liked this one. Very clear and pale liquor. Clay is an interesting note!

It’s a good tea! I guess you could also call it a “mineral” taste, but it reminded me of the smell of the clay when I took some ceramic classes.

Water quality and brewing devices will always influence the tea. What did you use to brew?

Purified bottled water and a small jian shui pot, so maybe the clay flavor came from the pot, but I haven’t noticed it in other teas

I’ve had some teas being influenced by the clay more than others, I’d recommend trying it in different vessels, but I’ve had Puerh taste like minerals before.

Drank with one of his silver sets (http://bit.ly/2lc6go2). Did about 15 steepings. I deeply enjoy this. This is like nothing I’ve experienced before, would highly recommend.

I’ve had a hard time gauging the Wu Liang region. I’ve enjoyed several of YS’s Wu Liang green teas, but found Scott’s 2013 and 2014 Wu Liangs sheng pu’ercha to be too candy sweet for me to enjoy these teas’ other attributes. This year, I gave the region another chance, and I was pleasantly rewarded with something special.

This is one of the most elegant and unique sheng pu’ercha I’ve had yet. The dried leaves are of the primordial middle-small leaf varietal from that region and they have a sweet grass and orchid-like sent which is greatly amplified and accompanied by sweet butter after the first rinse.

To get a better sense of the tea I drink the rinse. The tea soup is so clear and pure tasting, my eyes get wider in anticipation for the awesomeness that is about to unfold. My initial thoughts were “pleasant old tree green tea”, but that changed once the tea revealed a thick viscosity, luxurious mouthfeel, powerful qi, and complex notes of chardonnay white grape skins, sandalwood, tobacco, dandelion greens, wild orchids, and sweet butter.

There’s great mouth activity and vibrations that extends to the throat. It’s a very pure, concentrated, and vibrant tea that should gain complexity with time—-and I think the best value per dollar among all of Scott’s 2016 line.

This is a strong and bitter sheng. It was noticeably bitter for at least the first eight steeps. It was fairly smooth though. Somewhere around the eighth or tenth steep more of a sweet note emerged. I don’t think I would use the term apricots with this sheng. Despite it’s bitterness I did enjoy the tea. I think it is a good quality product and am hoping another six months of age will take the edge off.

one day i shall get a pumidor and age teas myself

@tanluwils That is possible. I might eventually get around to trying this again with less leaf.

I only recently started using a scale to sample teas and now it’s hard to go back. Just 1 or 2 grams can completely change the experience.

Nice notes. I have the 2014 version of this and WuLiang to me is a very different from other teas. I really have to feel like drinking it,like you mention the ‘apricot’ note is very much its own thing, more like prunes with a hint of tobacco. And it can be throaty pleasant or unpleasant depending on how you feel about it. Amazing quality for the price for sure.