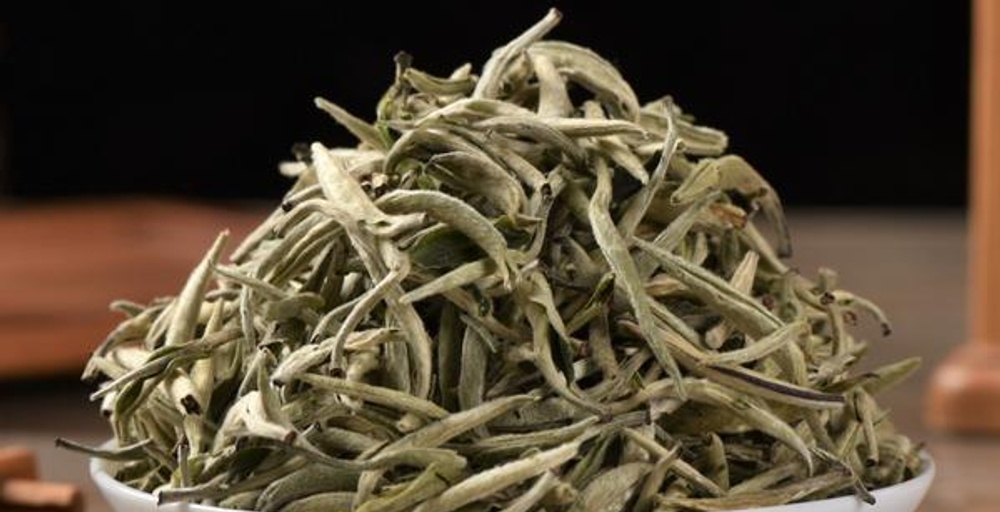 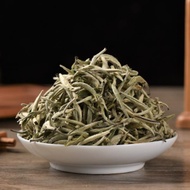 These “Snow Buds” are grown in Ning’er county of Simao, and picked in the very early spring. This is picked as a pure bud tea and then carefully processed through frying, rolling and air-drying. This a unique tea bush varietal called 雪芽#100 (Snow Bud #100) and features large size leaf and buds and prominent downy buds.

The taste is fruity and sweet with a touch of grass (umami) to counter it’s easy-going sweetness.

I began the New Year with a challenge to finish all the spring 2021 tea I own before 2022’s first harvest! I own the 2021 version of Snow Buds, and I have around 150g to work through, 4g at a time. Since I have so much, I think it would be fun to try a few different ways of brewing white teas with it. Today, I am trying Yunnan Sourcing’s suggested brewing style for white and green tea, which you can find on their website. (Please feel free to suggest other ways of brewing white tea!) The pot I am using is 140mL (NOT filled to the top) and ceramic.

The dry leaves are long, fluffy, and chunkier than I am used to. When in a jar, under 150g is easily enough to take up the entire volume just because of the leave’s fluff. They smell like grape gummy candies when dry, and of grapes and honeysuckle when wet.

I got six infusions out of this tea. The first at 10 seconds is nearly tasteless, but with each new infusion, a bit of a stronger taste is added. White grape comes out first, followed by honey, which like to linger on the roof of the mouth. There is no bitterness unless you push the tea, which I did accidentally do on the sixth brew, but there were also no additional flavors, and the bitterness was not unpleasant. I would say this tea’s overall flavor is subtle and refreshing.

Where this tea shines is in the mouthfeel. All infusions except the overbrewed one had a refreshing jelly-like quality that coats the tongue and feels refreshing for several minutes afterwards. There is no astringency at all, except when overbrewed, there is astringency in the aftertaste. This feeling and flavor combination reminds me a lot of aloe vera beverages.

I would not place this as my favorite overall tea, but I would put this very high on my list just to enjoy the texture. I have no regrets about buying so much of this tea.

This was another of my sipdowns from earlier in the year. I’m pretty sure that it was the first white tea I polished off in 2020 and seem to remember drinking the last of it sometime during the first half of February. Though I am a pretty big fan of Yunnan white tea, this one did not do a ton for me. It wasn’t bad though. If I had to say anything negative about it, I would say that it struck me as being too subtle as well as being rather boring and predictable.

There were some interesting aromas and flavors present in this tea, but unfortunately, they were often too delicate and subtle to hold my interest for any length of time. The tea liquor was usually more texture-heavy than anything, so people who spend a lot of time focusing on the texture of a tea’s liquor would be likely to get a lot out of this particular tea. I tend to focus more on aromas and flavors than texture, so perhaps this tea was just not one that was meant to be appreciated by someone like me. In the end, I’m glad I tried this tea, but I also doubt I would go out of my way to try any further productions of it.