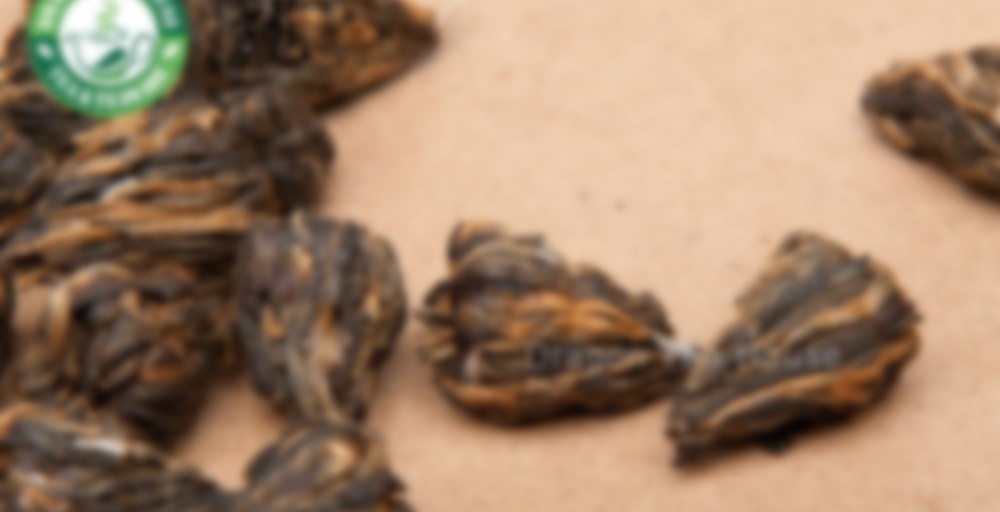 by Dragon Tea House
80
You

Yunnan is a region in China known for producing excellent black tea. Yunnan black is famous for its fat golden buds and our Yunnan Black Tea has a high concentration of these golden buds. Tea brewed from our Yunnan Black Tea has a reddish brown color. The aroma is strong sugary and floral with a slight roasted undertone. The taste is smooth and sweet and the aftertaste is refreshing and clean.

During third century BC, the central area of Yunnan, around present day Kunming (major city), was known as ‘Dian’. The name Dian Hong means "Yunnan Black tea". Often Yunnan black teas are referred to as Dian Hong teas. Yunnan black teas vary in their flavor and appearance. Some grades have more golden buds and a very sweet and gentle aroma without astringency. Others make a darker, brown brew that is bright, uplifting and slightly sharp. You may add milk to this tea (a longer steeping time is needed to acquire enough astringency to balance the milk).

This top organic needled black tea is composed of a leaf and a bud, approximately 1-1/2 inches long. The slender leaves are more golden than black. This tea brews a deep, golden honey color in the cup and is similar to the color of the tips. Light tannins, smooth with delightful aroma. It’s delicious and full-bodied, with a classic, clean and brisk Yunnan character.

The water used to steep this tea should be at the boiling point. Use about 2 teaspoons (3 grams) of tea leaves for about every 5 ounces (150 milliliters) of water. A steeping time of about 3-5 minutes with more or less time is recommended depending on the desired concentration.

Yesterday my partner and I decided to go on a mini road trip, to see how the landscape is melting and to try out the new truck on some dirt roads. We drove the loop in Nopoming Provincial Park, which is north of the Whiteshell, along the Manitoba-Ontario border. It’s a lot more rugged and less developed than the Whiteshell, and much quieter at all times of year, which, in my opinion, makes it far superior. When I’m camping or in the wilderness, people are the last thing I want around.

The prairies at this time of year are fairly dull. While I generally see them with an artist’s eye, and appreciate the nuances of all the different colours and textures, even those subtle differences are flattened in the post melt, pre bloom of spring. The fields, trees and ditches blend together into a fairly uniform grey-brown, contrasted with the uniform blue and deep green of the sky and evergreens. Add to that the road and the clouds, and you have five colours for this season.

Once you hit Canadian shield, the landscape gets more interesting – shield is always a less subtle beauty than the stark flatness of the prairies (and so utterly flat, in a way that I haven’t experienced anywhere outside of Manitoba.) The rock, interspersed with mixed forest of fir, spruce, poplar and the occasional birch, creates a macro texture, while the lichens covering the surface of the rock, and striations of broken sedimentary rock that protrude along the side of the road add a more subtle and delicate texture. Lakes, rivers and streams frequently abut or cross the winding road that undulates over granite that the road builders chose not to remove.

I sipped a travel mug of this as we drove, prepared earlier. Two pagodas, steeped for five minutes in 14oz of water yielded a rich, deep tasting brew, full of cocoa, malt and sweet potato. A good choice, whose flavour held up well in the travel mug, which seems to inevitably carry some trace of other flavours, no matter what I do.

I got a second excellent steep out of the two pagodas later in the evening, still rich and deep tasting.

The directions on the package recommend three pagodas per cup, but that is without a doubt overkill. Each one is at least the equivalent of a teaspoon of tea, possibly closer to two.

Between sharing these and drinking them often, they’ll be gone soon, and this will be a definite restock. They taste wonderful and the shape is also wonderfully suited to steeping without a strainer, and so, quite convenient.