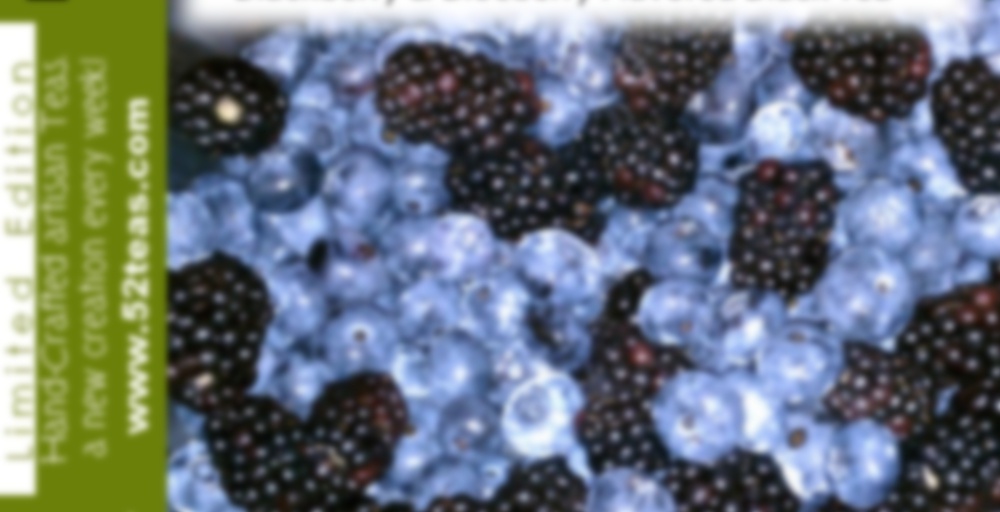 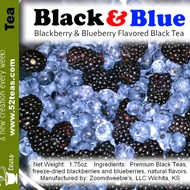 Whoooo-doggy! We got us an iced tea heah!

If you enjoyed our Blueberry Cream Cheese Danish, or the Blackberry Green or Blackberry Green Yerba Mate, you know that we don’t mess around when it comes to these two fruits. They are some of the best teas we’ve made in my humble opinion, so I figured, why not put them together?

Here’s our premium Indian black teas blended with real freeze-dried blueberries and blackberries, a little sweet and a little tart. Do NOT miss out on this blend, it is going to go fast, and I’m slowing down my production a bit because it’s summertime. (And some of our customers are acting like they ain’t never heard of iced tea!) =)

Needed a second cup of black tea immediately after the first. Just looking the tea annex and this one sounded just fine. And it was!

This is another tea that I missed logging for the first time during The Great Unlogged Period. It’s a solid enjoyable berry black tea that I’m enjoying drinking my way through. =)

OK, the mail just came and what a fantastic surprise! QuiltGuppy gifted me with a 3-week subscription to 52Teas! It was so unexpected, but so appreciated – what a perfect gift!

So I am trying this first as a hot tea – the aroma is spectacular… you might even say its berry-rific! The blueberry is really well defined in the scent, with notes of the blackberry in the background… YUM!

Oh, yum. Yum, yum, yum! This is so good. The berries taste very authentic, like, plump, juicy berries. The finish has that berry tartness. So good. The black tea is a little less distinct, but I think that flavor will pop once the cup cools just a little bit.

This is even better iced. So incredible.

I’m really happy to hear that you enjoyed it! Thanks @52teas for helping me to thank two special people who hopped in (pun intended) when my Hoppitea package was stolen by customs I mean, lost in the mail. (Hope you’re enjoying it, customs people!) ;)

It’s probably a good thing that I don’t work for customs. LOL (Take from that what you will)

My daughter’s Christmas gift from Ireland arrived in April! There may yet be hope of receiving your package.

I would be getting all kinds of complaints from customers if LiberTeas worked for customs. LOL.

well, you know, I might need to sample the teas that go through customs to make sure they’re not contraband. Never can be too safe, you know?

I commend you for your vigilance. :D

Wow, what an awesome and generous gift, you lucky little teapot! :D

Just finished off my generous sample from LiberTeas!

I wanted an ice cold tea latte and although my brain wanted to take my time and rummage through the sample drawer, something inside drew me to this tea and immediately plucked it out and closed the drawer.

I’m glad the tiny tea beast inside chose this one! So freaking flavourful. Almost juicy with the flavour of the berries, but sultry with the slight smokiness and depth of the base. I only did a 2 min steep so no bitterness – just deliciousness. The cold milk made it a nice creamy treat. I’m out of agave, so I re-filled my bottle with some simple syrup I made and added a squeeze of that. Awesome blend – really glad I got to try it!

Ricky is a kind soul who sent me stuff. All I did was notice that the new Steepster Select deal was not yet available for us international peeps, and then, what do you know! He offered to send me a box, as apparently he had some stuff he wanted to share with me anyway. Isn’t that nice of him? I’ve already started putting some serious thought into what to include in a return package.

I had the seriously first stroke of luck this whole week and managed to get home, in spite of having a small adventure with bus stops and bus routes not going where I thought they would, to get home just precisely in time to pick the package up before the post office closed. Awesome! I’ve had serious Positive Stuff deficiency this week, I thought I had earned this break.

Anyway, I got it home, confessed to the boyfriend that I had managed to nearly get lost between home and the bus stop (I find it easier to do this straight away and give him the cheap laugh. It always seems to slip out eventually anyway), and unpacked the box. There were the Select items in it and also some other goodies. This one was the one that struck me as the most immediately interesting of the lot. I’ve had so many good experiences with 52teas’ various berry blends. That raspberry and blackberry green blend, the name of which I can’t currently recall, springs to mind.

Anyway, I made a pot of this for dessert this evening and stretched my generousity a bit to make it a large pot to share iwth the boyfriend instead of the small one for me. Because I’m nice that way. When it suits me.

The aroma of the leaves and the steeped tea is more or less identical, and it’s so awesome. I sat there for several minutes just sniffing the tin! Berry-like and sweet, and with a strong note of something that weirdly enough remind me mostly of dates. That’s odd. I don’t like dates. Not one little bit. Why would I find a smell that remind me of them so pleasant? If I try to put dates out of my mind though, I think it smells sort of coconut-y vanilla-y with a touch of licorice. It reminds me of sweets. That must be the explanation then. :)

I’m getting a lot of berries in the flavour as well. Mostly blueberries, I think, with blackberries following closely behind, especially in the aftertaste. And underneath that I’m still getting the black tea, slightly astringent (ahem, I think that was my fault…) and slightly grain-y.

This is super-nice and right up my alley! I suspect it would work well on a green base also, bit like aforementioned rasp/blackberry number.

I’m just sorry that I can’t have more of it and surprised it hasn’t been posted about more on Steepster.