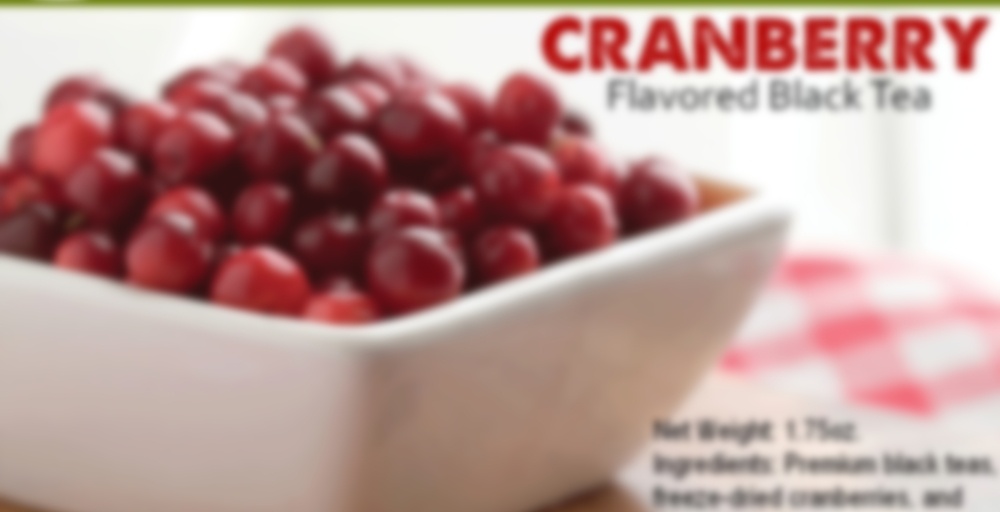 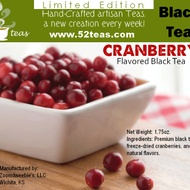 Do NOT let the simplicity of this blend beguile you. No, it’s not Pancake Breakfast or Rainbow Sherbet. It’s not Buttered Cinnamon Raisin Toast or Maple Bacon. It’s just Cranberry…

…Just awe-inducing, sweet and tart and delicious CRANBERRY with a base of fine Indian black teas blended with real freeze-dried cranberries. Not shriveled up old craisins. No, these are plump, ripe cranberries, freeze-dried at the peak of their deliciousness and now waiting for you to re-hydrate them and let their cranberry goodness tickle your senses and tastify your tea. Yes, I just made that up, but that is what they will do, leave you smacking your lips like only the sweet tartness of cranberry can do. Enjoy!

Thanks for this one LiberTeas!

A fairly random thought before reviewing this tea…

If there’s an Oolong Shortage…I know where it’s hiding! My YET TO BE SAMPLED Box! OMG! And I have been drinking a lot of oolong lately, so it’s not that!

This is pretty tasty! It’s not an overly bitter-tart Cranberry but it’s a nice sweet medium strength type Cranberry in harmony with the black tea base!

This is a flavored black I would drink often! Nice Job Frank!

bet it is super yummy cold too!

The cranberry is tart with hints of sweetness that weave their way in and out. The black tea is not so harsh with this lower brew temperature, and I think that is what troubled me so the first couple of times that I tried it. With some blends, the black tea base from 52Teas just works very well, but, with others, it comes off as harsh. With the cranberry, it came off as a little bitter and astringent. But, when I tweaked the brew time and temp, it produced a very flavorful cup without bitterness and very little astringency. Very pleasant.

I just had a cup of this too. You totally inspired me.

I was so very happy with this particular brewing. My first couple of infusions, including my infusion for iced tea, did not work out quite as well as I found the black tea base to be a bit too much for me, but when I lowered the temp and steeping time, it was SO GOOD.

I’ve come over all meh and tired and stuff. Started quite suddenly last night with low-level headache, chills and sleepyness. I wonder if I’m nipping something in the bud. Clearly the best course of action under these circumstances is to have another cup of tea (and attempt to NOT play Bejeweled for six hours straight), and since I paid ransom to Tax and Customs on my 52teas order yesterday, it seemed a good place to start.

We’ve bought the cranberry black from AC Perch’s recently and I’m really pleased with that one, so making a comparison with this one seems impossible to avoid. I was sniffing the dry leaves of each side by side and the 52teas one definitely smells like it’s much more strongly flavoured. I thought the ACP had a pretty pleasant level of flavouring so on the dry aroma alone, I prefer that one, I think. This one is a bit too forceful and there’s a funny screaming pink and dusty teal side note that reminds me of bubblegum.

After steeping it still smells pretty strongly flavoured and bubblegum-ish. I could probably identify it as cranberry in a blind test, but it smells like there’s more to it than that. It’s that dusty teal note again. I’m not sure what it is, but it reminds me weirdly of Earl Grey (that can’t be right!) or some such. I’m pretty certain these leaves have never even seen bergamot, though… At this point I can no longer compare it with ACP other than from memory, but I can’t recall if this funny note also showed up in that one. If it did, then it must be some sort of quality of the cranberry itself, but mostly I’m inclined to believe that it has to do with the differences in the strength of flavouring and the differences in the base. I can’t remember what the base is on either one, but I seem to recall Frank having mentioned once that his black base is often Nilgiri (although I can’t remember where I saw that and may in fact have made it up) and I’m pretty certain that ACP is either something Chinese or Ceylon or a blend of both.

As mentioned, I thought ACP had a level of flavouring that was just right for me. Not too little and not too much. Clearly fruity but also with a detectable tea flavour underneath it. This one is definitely far more fruity, and there it is again, that teal note! Where is that coming from??? Anyway, strongly fruit flavoured and yes, definitely cranberry-ish with a sort of tangy sweetness. I still think there’s something citrus-y going on here as well, and I’m having a sudden overwhelming urge to try and do up some sort of orange and cranberry combination, now that’s I’ve got an abundance of both available to me.

This is definitely a pleasant tea and as usual I once again find myself preferring the fruity blends over the more outlandish ones that 52teas sell, but all in all, I do prefer the fruity blends to be either green or white, I think. Those really seem to be my favourites of all. For a cranberry flavoured black in particular, I think I prefer ACP over this one, although this is definitely also a good one.

When this tea was released, I was totally on a cranberry kick. Thankfully I am still riding the waves of it now that my first month of my subscription has arrived and I tore into this one first!

I kind of got distracted making dinner while drinking it. First I thought I may have steeped it too short because I got distracted by a bell pepper. I thought I was just going to do the prepwork and hold off on eating for another hour but my stomach disagreed, so an hour later the tea was not very warm.

And that’s okay, because at first I was not tasting cranberry. And now, I do. It really sneaks up on you, and it’s more prevalent now that it’s cooled. Yep, definitely still loving its sweet, tarty flavor.

I had to drink some sort of cranberry cocktail drink this weekend when thirsty at my boyfriend’s, and I would take this over that stuff hands down. It doesn’t have that nasty sugary flavor of those juices, making it way better. I like it.

And I believe this is my 100th tasting note, hooray!

Thanks to momo for sending me some of this tea like… forever ago!

Hmm, interesting. A sweet sort of berry, perhaps not obviously cranberry.. atop a bit of an astringent black base. Not my favourite. Maybe this would be good iced? And sweetened?

Yum! I like cranberries ad this is a nice smooth tea with enough flavor to be interesting and still enjoy the quality tea.

I am drinking this as I’m eating my spicey homemad (vegan, of course) Dal Makhani I made early. I’m downloading updated maps into my GPS. I’m ready.
I was excited for this tea, because I love cranberries,I love black tea & 52Teas usually is on target
The tea itself in the bag is nice to look at with the bits of cranberries and the cranberry aroma is right there. It’s freshly tart with fruitiness, but not overwhelmingly “per-fumy”
It’s pretty nice with a real tartness, that unique cranberry tartness that is tartness mixed with a little bitterness. Sugar can tame this, but I found it not unnecessary.
I’ll drink it a few more times then save it for iced tea! I’m sure it will be great iced. I like this tea,,,the tea flavor comes through and is equally present with the true cranberry flavor.
Yum
oh, yeah…goes well with Indian food ;-)