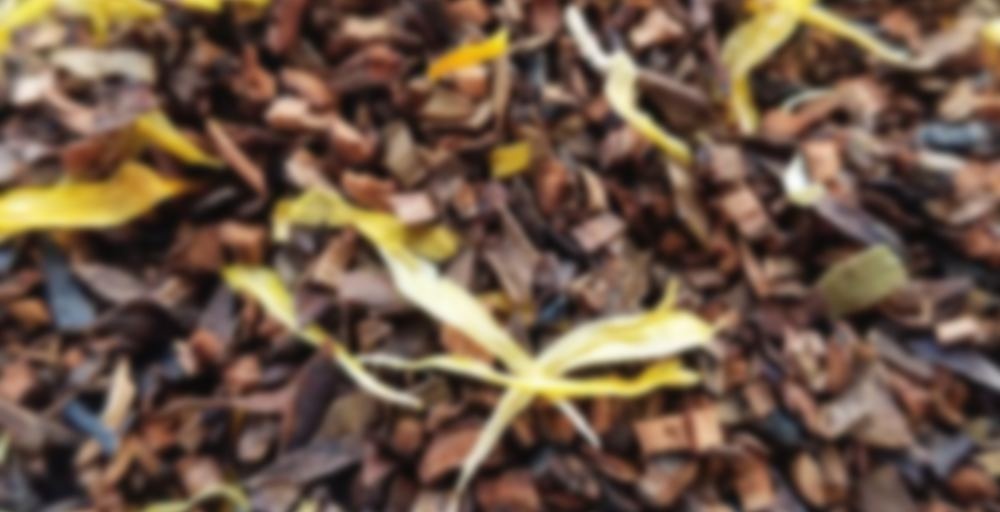 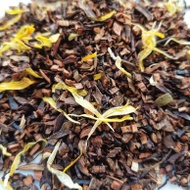 I’ll admit it – I wasn’t 100% convinced with this flavor idea when I was trying to think of a flavor for this week. I knew I wanted a caffeine-free blend – but I wasn’t sure what direction to go in. I already had planned a lot of fruity, flavor packed teas – so if it was going to be a fruity flavor, I wanted it to be different than the other flavors that I had going on this month. I thought – almost joking with myself – hey, how about kumquat? Eventually, the kumquat idea began to take hold. I wanted something ‘desserty’ to go with it – something sweet as kumquat tends to be somewhat tart – but not too sweet. Something that would play to the tangy qualities of the kumquat notes.

So, I decided to go with cheesecake. I blended it and when it came time to taste test it – as I was steeping it – I started thinking of all kinds of ways to ‘develop’ the blend. “Maybe I’ll add some spice. Cinnamon or cloves, perhaps? Maybe some ginger?” As I said, I wasn’t 100% convinced with the idea of a Kumquat Cheesecake flavor.

Finally, after an 8 minute steep and another 10 minute cool time, I finally took a sip. And a smile came over me. My taste buds were delighted! This is really tasty! It turned out infinitely better than I imagined it to be – without spicing it up – so I decided that it should be left as is.

So here it is: a blend of organic, caffeine-free honeybush from South Africa and natural flavors (plus a few calendula petals to give it a pretty appearance). Having never actually tasted a Kumquat Cheesecake, I can’t tell you definitively that it tastes exactly like one. But I can tell you that I can taste tangy cream cheese and the sweet and slightly sour flavor of kumquat. And I can tell you that if I were to imagine what a Kumquat Cheesecake would taste like, it would taste a lot like what I’m sipping right now.

Using this for the prompt “an African tea” (for the honeybush base).

I’ve never had a kumquat, so I don’t really have any knowledge to compare the flavor to… but what I got was a citrusy flavor that was also slightly melony? Like a cross between an orange and honeydew, with a touch of citric sharpness. The honeybush itself was very smooth for me… Usually I get strong peppery notes from it, but there were none this time, instead it was quite woody with a cinnamon sort of edge to it.

A nice cuppa on a (surprising!) rainy evening. I have hardly touched a hot cup of tea in weeks, as coldbrew season has fallen upon me, and it was warm and comforting and hit the spot as I provided my lap as a heated bed for the Chiya cat.

K is for… Kumquat Cheesecake!

Only had one J tea and didn’t want to dig through other companies… so today is also K!

This tea is smooth and mild, and if I am really in the mood, I can imagine it being creamy and maybe even having the slightest cheesecake tang. But, I taste no kumquat; no citrus whatsoever. It’s a pleasant enough cup but that lack of citrus is unfortunate!

This was in the recent package of samples from AmandaStory! :D
I’m getting a light citrus at the start of the sip and a touch of tartness toward the end of the sip and finish. I don’t know that I’d name it as kumquat. To me kumquat is bright and bold, sweet and sour in a tiny package. I get a slight creaminess, but I don’t know that I’d call it cheesecake. Aside from it not being what I expected based on the name, but it’s a nice enough cup to enjoy in the evening.

I was happy to see this blend in the recent mystery bag I ordered. The flavor here is definitely fruity, though I wouldn’t say it tastes like kumquats. The fruitiness goes very well with the rooibos. I don’t think I taste any hints of cheesecake. I’m definitely enjoying this one and would like to award it points for having a flavor I haven’t tasted in a tea before. Whatever fruit flavoring is used is new to me (I think!) and it’s very refreshing. The flavor lingers in my mouth for a long time. The resteep was quite strong as well.

I have a kumquat tea I think from Lupicia maybe? Anyway I have no idea what a kumquat is or if the tea tastes like them, haha.

They’re these tiny oranges that you eat with the skin on! They’re pretty tart, but I’m definitely in favor of tea flavored with kumquat!

Oh, good to know, thanks!

Had this one today in an effort to try and play with the honeybush. This one is sort of meh to me. In part because of the honeybush, but also because i just wasn’t feeling the flavours. The creamy cheesecake was there but the jumquat flavouring just didn’t jive for me- something about how it blends with the honeybush. oh well!

If you tasted this tea blindfolded, you would never be able to guess the flavors. Well, other than honeybush – which is really the only identifiable flavor.

This is essentially a vaguely fruity honeybush. You could tell me this was nearly any fruit, and I would believe you, the flavor is so indistinct.
As for the cheesecake component, I swear there is a bit an after tasted of cheesecake, but it is so faint I could just be imagining it.

If you are looking for a honeybush with a whisper of fruit and a hallucination of cheesecake, this is the tea for you.

(note i have brewed this twice, the 2nd time I made a double strength brew, the above still stands true, this tea is honeybush all the way)

This is a really frustrating sipdown for me – but probably not for the reasons you’d think. I finished this one off this time around as a latte and it was absolutely delicious. Sweet, bright notes of kiwi (kumquat?) with a really rich, thick mouthfeel and creamy/tangy cheesecake flavour amplified by the latte format. It was insanely delicious, and really unique.

I’m frustrated thought because this is such an insanely unique tea and I really, really would have liked to continue exploration of it – but I only got two cups of it. I mean, that’s 100% my fault because it was this latte that just totally murdered the leaf/used it all up. If I wanted more cups, I should have split up the leaf and steeped this normally as a hot tea.

So I’m stuck between the fact I had an AMAZING latte that I do not regret making, and the fact that I really wanted to have more experiences with this tea…

Ah yes, using too much leaf but not regretting it because it was delicious. We have all been there. Such is the way of the latte.

The idea of a tangy kiwi tasting tea latte sounds like something that would be delicious! I might have to give this a try.

This is another tea I pulled while going through my tea drawers. It had one serving left and turned a year old in June so I figured it was time to finish it off. Mostly the honeybush is all the remains of this tea. It is nice and sweet but nothing unique. Plus, given I sort of forgot about this one, it would seem kumquat isn’t a flavor I reach for often.