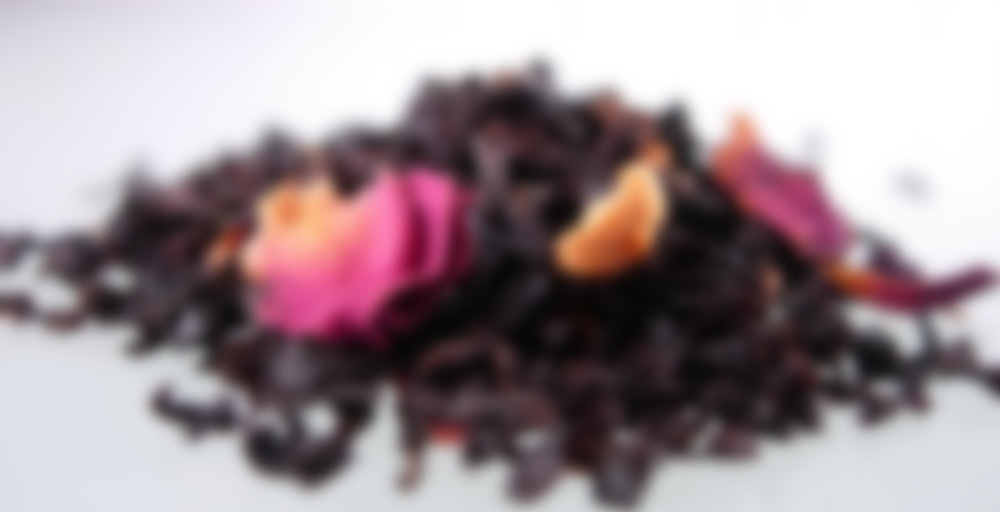 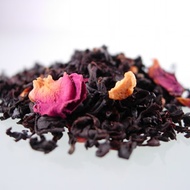 Created in honor of Joseph Walsh, who published one of the Western world’s first books on tea blending in 1896. This tea offers a rich, flavorful cup combining fruity notes of white peach and gala apple with cinnamon, and has a crisp floral finish.

This tea has been discontinued.

Brewed up a big mug of this early last night to share with my husband. Wow was the liquor a deep crimson. There must be more hibiscus than I had pictured in this blend. I’ve never had a black tea blended with hibiscus, so I was very curious to try this blend. Thanks to Jaime I have the opportunity.

I can certainly taste the fruity tart hibiscus when sipping this tea, but it isn’t the foremost flavor. The black tea base shines through, and there is a fruity, almost an apples and peaches fruit flavor, the end of the sip certainly brings out the rose and floral aspects to the tea. Unfortunately, this floral rose flavor is brought out way to strongly as the tea cools. Sipped hot, this tea is a great blend, the cooler it gets the less I want to sip. The flowers overwhelm the tongue.

Try it, but try it hot and drink it fast!

May Flowers! This is one of my oldest samplers (I bought it with a birthday giftcard in March of 2017, I believe?) and it has just barely slipped past the “best by” date, so I’ve marked it as a priority for sipdown. Art of Tea has since discontinued this blend, too. Ouch. So much changes in a mere year…

This is a black tea blended with rooibos, orange peel, and hibiscus, rose, and safflower petals. I couldn’t see any rooibos in my sampler, but could smell a bit of the telltale “medicinal” scent I get when it is mixed with black leaf, but mostly the leaf smelled strongly of the black tea and rose petals.

Steeped up, the tea looks like a medium-bodied black tea and gives off a rosy aroma. The flavor presents as a nice, malty breakfast tea, but it isn’t as bitter or as astringent as most thanks to the lingering rooibos hiding in the blend; I don’t actually taste it (I’ve had some other black/rooibos blends that don’t get that balance right and the flavor can be rather inconsistent, so I consider this a good thing), but I think there is a sweetness added to the cup by its presense that helps mellow the edge off the black tea, and I actually prefer it that way. There is still a bit of astringency left after the sip, but what is left is much more mild. There is a floral sweetness to the tea as well; there is a notable rose note to the sip which is very pleasant, though it is nowhere as strong as, say, the strong rose flavoring to be had in the White Rose tea I featured a few days ago. The rose is much more muted against the strong black base here, but there is a bit of a sweet, lingering rose floral taste on the tongue in the aftertaste. I can make out a very subtle fruitiness deep in the sip which is likely from the hibiscus, but it is very faint; there is not much hibiscus here, and I doubt many would even taste that much against the strong maltiness of the black tea. If you are a hibiscusphobe, I honestly don’t think you have to worry.

Overall the impression I get is a breakfast tea with a floral touch. I find it quite nice, and will probably try it with some milk next time I make it.

I’m with you on this one. It’s sorta meh. I get light black tea notes and rose. Mostly rose. I get the impression that this one is mostly scented, instead of flavoured. Still, I’m happy I got to try it! :D

I had high hopes for this tea. I was hoping for a lightly flavored black tea to add to my morning routine. Sadly it did not live up to expectations. It’s not a bad tea, it’s just an “ok” tea. I got hints of grapefruit with a flowery finish. I am finding that I am not a fan of flowers in my tea.

I will save it for swaps, but it won’t be a restock for me.