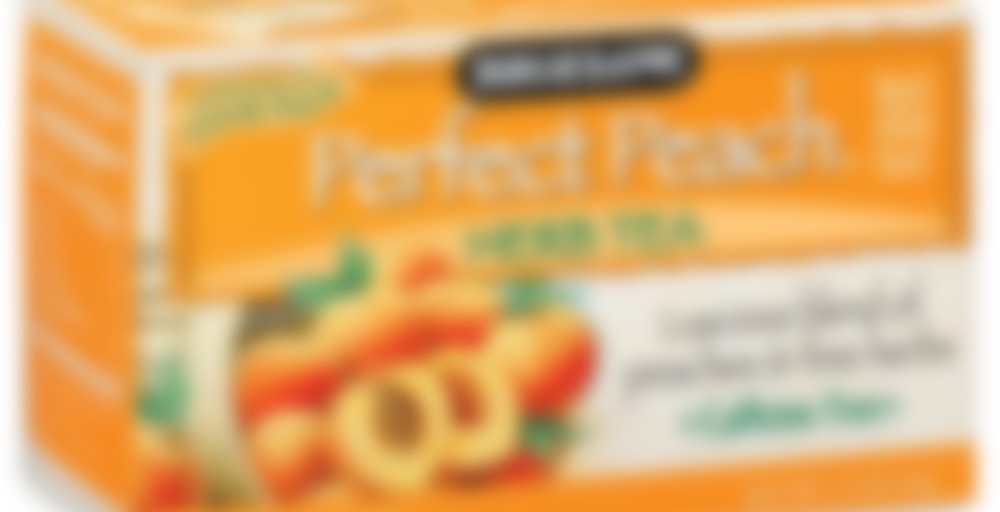 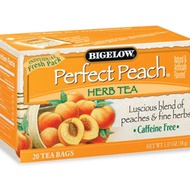 with 37 Ratings Rate this tea Rate This Tea

Here’s a delightfully different blend with aroma and taste of fresh, ripe peaches and herbs. Perfect Peach™, with its fresh-from-the-orchard flavor is a delicious treat whether you serve it steaming hot or over ice.

I made a previous note about this as a hot tea but today with what is turning out to be a super strange weather day (rain, sun, hail, sun, rain…and it’s not even 12pm!)and I felt it’s about time I tried this one as an iced tea.

One thing I never do is put sweetener into an iced tea, ever. I like iced tea’s to be naturally sweet and with a gentle and refreshing flavour, preferably fruity. This was my reason to believing this would be a wonderful iced tea, it’s strongly peachy but as it cools down it tastes more and more refreshing.

This is a little sweet, a little fruity, very light, very refreshing, and a little floral. Perfect for iced tea, any time, any where.

For a detailed review of this tea please read my previous notes.

Thanks for reminding me about cold brewing this tea. :)) I have some old teabags of this tea that would probably still be good for cold tea.

Cold tea makes a nice change from time to time doesn’t it? :)

Yes especially when it gets hot :>))

Thanks for sharing with everyone how much you enjoy the Perfect Peach Iced….did you know we do also offer this flavor in quart-sized Iced Tea Bags?https://www.bigelowtea.com/Catalog/Product/36/6/29/Perfect+Peach+Herbal+Iced+Tea.aspx
Kathy for Bigelow Tea

This herbal certainly smells peachy. I am not usually a hibiscus hater, but this would be greatly improved by removing it. Maybe if I mix it with some basic black tea I could learn to like it. Or maybe not.

I think the hibiscus makes this a bit tart, something about it is a bit off…
By itself, I do not care for it, but steep it in some hot apple cider and it is super nice.

So on the scale of world importance, finishing a video game really isn’t high up there. That is, unless it’s Persona 3, one of the most depressing and mind-wrenching fake-dating-sim fake-rpg fake-SMT games ever churned out by the second-most-evil video game company ever (that would be Atlus; I claim that Nitro+Chiral is number one, even though I haven’t played any games they’ve produced).

Now I’m sure you’re wondering what this has to do with Perfect Peach (or tea at all). The truth is that Perfect Peach is perfectly suited for for P3. At least, for me it is. Brew it up strong in a mason jar and add some milk! A nice, soothing overtone of peach to comfort all your emoness over social links, a nice hint of lemon to perk you up through all the stairs you have to climb in Tartarus, and an underlying artificial flavor to remind you that the end is going to be so depressing that you’ll have to take a time out from life to recooperate.

You know what’s really sad, barring the end of the world that was supposed to happen in 2010? The fact that I can’t save the world because my sister stole the game and console from me and is not letting me play it because she said it was a stupid game and is playing it herself now. I mean, I was ~ 98.5% of the way through, I had gotten like 86% of the personae, and I had even prepared to drink a whole box of Perfect Peach in the last push to the end. …Now I just have this tea to console myself while I reassess whether I should still be playing video games at my age.

….At least the tea is tasty.

this sounds delish!! and at my age… I do whatever I want :P

Thanks ASHLEY for this sample! My house is full of peaches this week so peach tea seemed like a great idea! Also: just got back from swimming, and I haven’t been swimming in years and years. I need sustenance and comfort!

Nervous! I see red! I see hibiscus! I don’t much care for hibiscus, but lets give this a go. It smells scrumptious so that’s comforting.

Sipping time. In the past I’ve found hibiscus to be tart and nasty. But this mixes nicely with the peach. Do I taste cinnamon? This could be a nice bagged tea for work. I’ve been considering picking this up for a while. Thanks again Ashley!

Ahh. One of my old favorites that I’ve been buying for years and years. I do add a good spoonful of sweetener to balance out the tart. But it’s just one of those homey teas that brings back good memories that I turn to when I’m in need of some comfort. Not to mention I’m a huge sucker for peaches and cinnamon. Mmm. Glad you’re enjoying your samples!

Bought a box of these as filler for a gift box I sent someone, but didn’t get around to trying them until now. It’s… okay. I don’t love fruity infusions, and this one is fairly weak. Still, it’s warm, and smells good, and it’s not worth climbing down from my bed to throw it out and make something else.

One of my long time favorites. I remember years ago I’d been trying to find a peach tea but all the others I tried tasted like bubblegum. Normally I don’t prefer fruity teas hot, as a lot of the time they taste like hot fruit juice, which I don’t find appealing, but with a touch of sweetener added, the spices in this one remind me of a spiced apple cider, which I love. It tastes like the end of summer/beginning of fall; with summer sun ripened peaches colliding with autumnal spices.

Ashley, happy to read you’ve been enjoying our Perfect Peach. Loved your interpretation of the flavor profile…we think you’ve captured it perfectly. We do hope you continue to enjoy this one from one season to the next!
Kathy for Bigelow Tea

This is a nice, mellow peach herbal tea. I like that it doesn’t have any added spice flavors, and it’s definitely at its best with a bit of honey to liven up the peachiness. Very soothing in the evening.

Im a bit biased because I love peach flavor in just about anything. Nice lingering taste of peach and doesnt change taste too dramatically if you let it get cold. Using very little sugar can make it a sweet treat.

I like Bigelow Teas. Perfect for tucking a few different teas into your pocket before you head out for work.

This one is yummy. I just read here that the box says to add sugar to bring out the peach flavor. I didn’t do that, since a friend gave me this packet, and therefore, no box to read. I like how sour it is without sugar, though. I really dislike it when I feel like I HAVE to add sugar to a tea to enjoy it.

It’s a little artificial tasting, but not enough to turn me off. Is it my favorite peach tea evah? No. Would I purchase it again? Gladly.