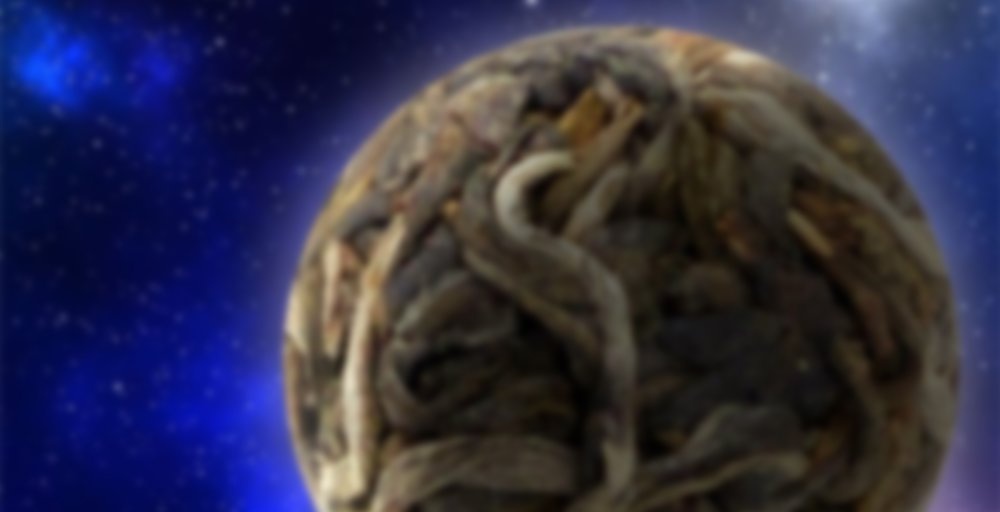 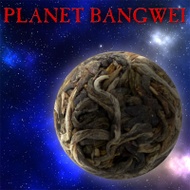 by Crimson Lotus Tea
81
You

“A world of flavor in the palm of your hand!” This is a new planet in our Yunniverse.

Don’t let their small size fool you. These tiny spheres of puerh are made from Bangwei arbor tree material. They were picked and processed and pressed in the Spring of 2016. This tea is floral and fruity with pronounced sweetness and a bitterness that can come from prolonged steeping.

Each of these hand made ‘planets’ weighs around 8 grams. These are called ‘long zhu’ (龙珠) in Chinese; this means ‘dragon balls’. They are hand wrapped and ready to brew. These work great with any style of brewing. You can toss one in a gaiwan or clay teapot. They work great grandpa style, or in an on the go thermos. They are tightly compressed so we give them a nice long initial wash to help them open up. The first steep is longer than normal until the leaves open up.

Adventure in Every Cup 81

Overall – mellow , sweet and juicy. a tea that produces a lot of salivation. Green apple.
I tried this in silver and the cup cut the sweetness and the depth I was getting in ceramic.
I liked this planet a lot. I tasted this tea for a long time – I went on a 1 hour walk and could still taste it!

I’m reading through my notes from last weekend when I had decided to get a few sessions in prior to my trip down to North Carolina (which had stopped a day short due to my wife and I both getting ill and having to return home to fully rest). Upon resting for nearly four hours, upon the return, I’m able to muster enough strength (mentally/physically) to sit here and write the reviews….

Notes: Light flavors upon the first few steeps until the ball had “blossomed;” which allowed the tea to start producing stronger notes. After the tea had
bloomed there were honeysuckle/orchid and orange/citrus flavors. Balled tea is hit or miss for me due to the fact that it does take time to expand/produce a flavor profile; however, once this had opened up a bit, I had enjoyed the steeps following that initial “bloom”

I received two of these balls with a teaware order a few months back. I took one of them on a trip with me during the summer to drink with a friend, but unfortunately that session turned out to be a big disappointment and the tea didn’t really taste like anything besides green and astringent. It could be that the tea didn’t like traveling with me even in a closed ziplock bag. After letting the other one sit in my pumidor for a few months, I finally decided to break it out.

I brewed the tea in a 140ml gaiwan giving it the two suggested 30s rinses before brewing it like I normally would. I gave both rinses a small taste, but the first one was still far too light while the second was too nasty to drink due to the long steep time. Thanks to being a single serving, you mainly get large, intact leaves with less broken leaf you’d get with a cake. Aromatically the tea is pretty much your standard young sheng fare from what I could tell. I did a total of ten steeps, for 8s, 8s, 10s, 15s, 20s, 30s, 45s, 60s, 60s and 60s.

The first infusion was still quite light, but perhaps partially thanks to the long rinses the body was already quite big, I’d say medium+. I’m not quite sure about the taste, it wasn’t really purely mineral nor vegetal. The lasting aftertaste was light, but it was there. Despite being light, the tea comes across as pungent, possessing a backbone that you can sense.

The mouthfeel remained almost as thick in the second steep, with the taste being now more mineraly, but not in a typical way. The tea showed signs of being astringent or bitter upon entering the mouth, but the actual astringency never arrived. The finish on the other hand had hints of vegetal to it. There wasn’t really any sweetness to speak of, but the taste and aroma lingered in the mouth. The underlying sense of pungency from the first steep continued to be present as well.

Only extending the steep time marginally for the third infusion, both the body and flavor were getting lighter. Despite this the mouthfeel was still pretty nice and the aftertaste very long-lasting and stable despite not being particularly strong. The taste continued to be predominantly mineraly, but again not in the most typical way. What you noticed immediately about the next fourth steep was how cooling it was, impressively so. The body continued to be decent and the taste was very clean and still quite mineraly. The brew had a very nice calming effect that was almost meditative. Definitely a standout infusion.

The fifth steep still maintained a decent body. At this point the tea started to hint at astringency, but it was almost nonexistent. I’m not quite sure about the flavor, it lay somewhere between green, mineral and vegetal. Aftertaste was still a thing, albeit weaker now than before. The body got again maybe a bit lighter in the sixth steep, but the mouthfeel remained nice. The flavor was stronger now thanks to the extended brewing time and the mineraly taste was now similar to some mineraly premium Chinese green teas like Long Jing, etc. The tea may have even hinted at some vegetal/mineral sweetness in the finish. This was probably the best infusion of the session. After finishing your cup, the tea did leave a slightly astringent feeling in your mouth. It also had a mildly mood elevating effect similar to green tea but milder.

The seventh infusion was the turning point for this tea. I should have probably extended the brewing time less than I normally would for pu’er, for in addition to getting more body the tea also started tasting less enjoyable to me and being a bit astringent. It wasn’t bad yet, but it started bordering on nasty. For the eighth steeping I extended the brewing time less than I typically would and for infusions nine and ten I kept it at a minute. All of these tasted very similar. They were somewhat drinkable, but all had this quality to them that is a bit off-putting to me, I just call it nastiness. I will say though that all of these infusions even with the truncated steeping times were stronger in flavor than all the prior infusions, which I found quite impressive. I think that this is a good sign for future aging prospects in mind for when the flavors in the late steeps have become more developed.

After my initial disappointment with this tea, this second session really surprised me. It has a long list of good attributes. That being said, for me this was more of an interesting tea to experience than something I’d be interested in drinking regularly. My gut feeling has great confidence that this tea would age well and it would be interesting to revisit it in five or ten years once it has some real age on it. Since my experience with it was so positive, I’m on the fence about whether to give it a Recommended stamp or not, but I try to keep my standards for doing so high, so since I would not purchase more of this tea for myself I’m opting to not do that. However, if you do have any curiosity toward these planets by Crimson Lotus, this is one I recommend trying.

A tea usually always performs better when it acclimates from the shipping. That pumidor seems to be working as well.

Took a couple washes and a steeping or two to fully open up. My first sheng I’ve tried from my “Puerh Yunniverse” pack. Still new into the world of better sheng and this has been one of my favorites. Very well balanced astringency coupled with great floral, citrus, and other undetermined fruity flavors and scents. Decent Qi. Left me feeling warm and fuzzy.

I brewed this in my gravity steeper (which is so great for work sessions). I started with a 30 second rinse, then added 200ml of boiling water slowly directly onto the ball. It opened up beautifully after a longer initial steep of about 45 seconds. The lovely heady sweetness is what struck me first when I smelled the wet leaves and tasted the smooth liquor. Like ripe peaches and dried figs and cherries. Delicious. The taste became more bitter and astringent in later steepings, but still enjoyable.