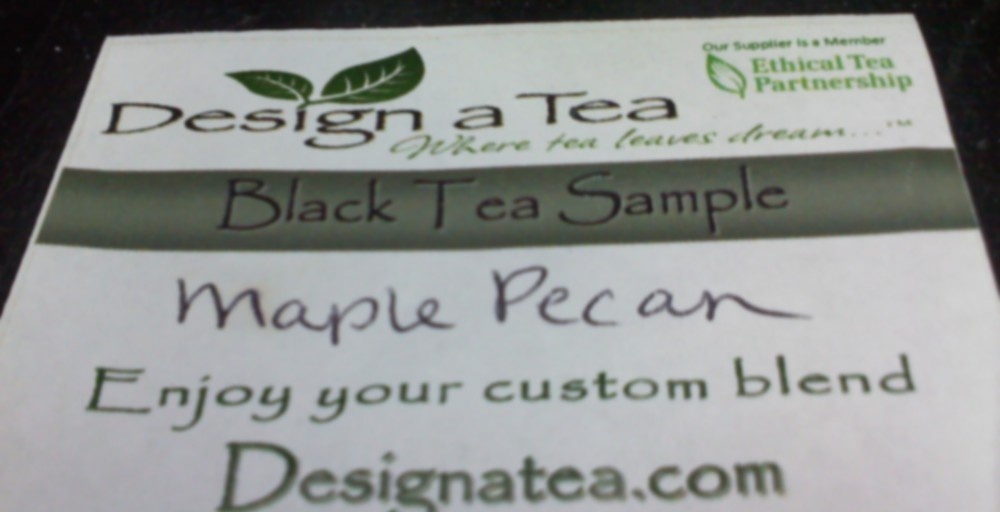 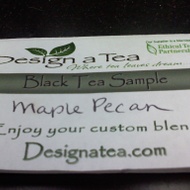 From Design a Tea

About Design a Tea View company

So very glad that I’m having more of this tonight! Holy moly, what a different steep does to this tea.

I’m getting maple, I’m getting creamy, I’m getting pecan, I’m getting sweet. It’s really fantastic – so much so that my 6-year-old took a sip, and asked if he could “have as many sips as I want”. I said no, because it is caffeinated, and made him some of Tea Desire’s Sweet Toffee (rooibos) instead. He says it’s “ahhh.. makes me feel better – tea”.

Anyway. This is delicious! Upping the rating significantly.

Also, it makes me want to peruse Design a Tea more; the concept of creating my own tea blends just plain rocks.

I haven’t loved all the teas I got from them, but it’s hard to blame them when you choose what’s in it. Brian is just amazing, helpful, funny – great guy to work with. If you are at all interested in playing “mad scientist” this is a fun company to do it with. (It’s also really inexpensive – bonus!!)

That’s awesome Dexter – have you ordered full size blends, or just the sample?

I’ve ordered from them twice, both times I got full sized blends (and some samples the first time). The first time I stayed pretty conservative – regular base plus two flavors -off the main design page. The second time I dug way deep into the site and choose some of the specialty bases and added all kinds of stuff. Brian is great – just because your “dream” doesn’t fit into the drop down boxes doesn’t mean you can’t get it. I wrote almost a full page of “special instructions” and I got everything I asked for – no problems at all – fun emails from Brian to clarify. Great experience.

This is my first of two samples from Design a Tea. Ever since my fiancé bought this delicious maple pecan granola, I’ve had my mind fixed on the idea that it would make a fantastic flavored tea! I submitted the idea to 52teas and then came across Design a Tea’s custom blends. The closest I could get was subtracting the granola.

The dry tea definitely smelled like maple. The sample is only enough for one infusion and came in a T-sac. I hate T-sacs. They don’t let the tea leaves float around enough to let the flavor release. Of course, I didn’t come to this realization until it was too late.

The brewed tea still smelled like maple, but the taste was pretty lackluster. It was watery. I anticipated this when I saw how little leaf was in the sample, so I used about half as much water as I normally would. But I guess it was still too much.

As for the pecan, there might have been traces of it in there. But not enough that made me 100% sure I could actually taste it and that I wasn’t just imagining it. Needless to say, I won’t be buying a full bag of this. But at least I know maple and pecan is a good combo, so I’ll hold out hope that 52teas will blend it. Now, on to the next!

Depending on what you’re looking for, you should check out Ovation Teas custom blending. It is definitely a different approach than Design A Tea, but it’s got a lot more options. Unfortunately, Maple doesn’t appear to be one of their flavorings… but it might be worth emailing them to ask.

Cool, thanks for the tip! I’ll definitely check it out. :)