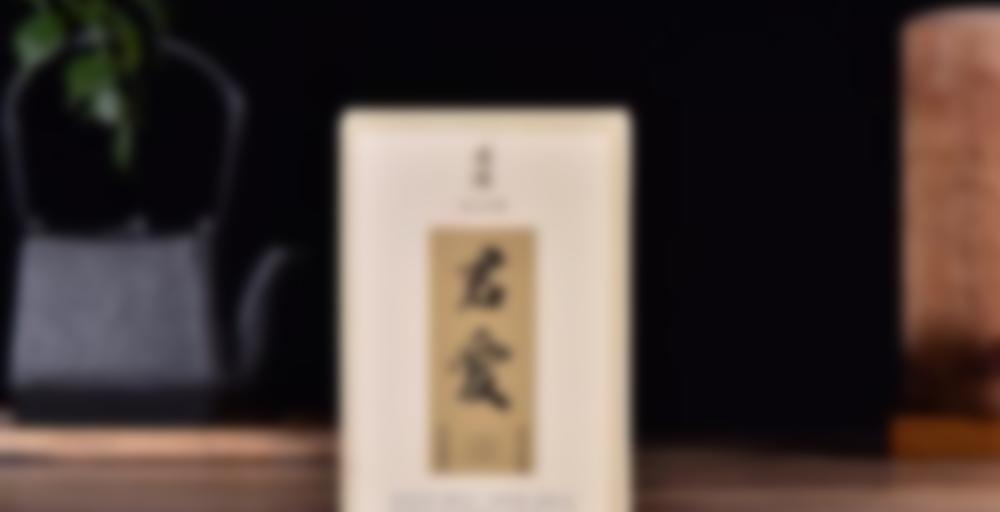 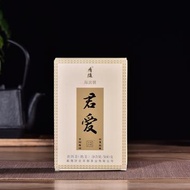 After reviewing Hai Lang Hao’s Yi Shan Mo ripe pu’er from Yiwu, which is often dubbed the queen of pu’er, here comes the king. My sample was ten grams so I used ten grams. For brewing I used my trusty 160ml Jianshui clay teapot, although I didn’t always fill it quite full so the leaf-to-water ratio is probably closer to 1g/15ml or so. I gave the leaves a brief rinse for under ten seconds and let them have five minutes to soften up while I did other preparations. I did a total of eleven steeps, the timing for these being 10s, 8s, 10s, 13s, 20s, 30s, 45s, 75s, 2 min., 4 min. and 10 min.

This tea opened up really strong. I don’t know if it’s as strong as the 1996 CNNP Green Mark Te Ji I reviewed, but it’s definitely one of the strongest ripes I’ve had. The body was already quite good and the taste that of unsweetened baking chocolate. The aftertaste was strong even just after a few sips. It felt like I could already feel the tea affecting me a little bit, although I can’t be entirely sure.

The second steep brewed a really dark mahogany and you could just tell how thick the tea was by looking at the last drops slowly dripping from the teapot. The taste and texture were that of sugar-free chocolate pudding. The tea was so thick, it felt like you could use a spoon to scoop it up. Both the taste and aftertaste were strong and there was a gentle pleasant bitterness to the tea.

The third steep was thick, slick and oily. This time the flavors were more subtle, but eventually I arrived at the conclusion that the taste was mainly woody. At this point I was already starting to feel the cumulative qi. For the fourth infusion I extended the time just a hair and the tea was strong again. I’d made it slightly bitter, but the other flavors were a bit hard to discern. I’d say they were mainly woody again. The qi was hitting me hard though and I almost decided to go lie down because of how intense this tea is.

I brewed the next infusion just a tad longer than I’d intended, but the tea wasn’t too strong at all. Seems I should have gone even just a bit longer, because there was less body now and the flavors came off as rather simple, being mainly simple woody notes. I managed to get the strength back where I wanted in the next steep and the texture improved a little too being slightly syrupy. The flavors had now shifted slightly toward darker woody tones. The tea was very easy to drink, nice, but not super rich nor thin. The cha qi was still falling hard on me, making me feel like I might drop my cup if I was not careful.

Steep seven brewed incredibly sweet, like somebody had put a full cube of sugar in my cup. The taste was sugary and woody. Really nice. At this point it did start to feel like the qi was letting up. The strength continued to be good in the next steep. The body was decent as well. The flavors however were rather simple. The tea was fairly sweet, but not as sweet as before.

Steep nine was still solid in terms of strength. It started off woody and maybe a bit mineraly. It was very fresh and slightly cooling. As I kept drinking it, I started tasting menthol more and more. This was really interesting as I’ve tasted mint a couple times in pu’er, but never menthol. I ended up really liking this steep. While I found the next infusion less cooling in the mouth, I could taste menthol even stronger now. The sweetness was pretty much gone from the tea, making it taste like a sugar-free breath mint. The mouthfeel was still quite nice and overall this steep was enjoyable, pleasant, perhaps even rewarding for such a late steep.

The eleventh steep was the last one I did. There wasn’t all that much taste left even after a ten minute infusion. There was kind of a bad berry taste to the soup, maybe a bit acid. Maybe you could have done one more ultra long infusion with these leaves, but I deemed them pretty much done.

Unsurprisingly, this tea was good. Was it the best ripe I’ve had? Actually, no. I liked the Yi Shan Mo better. And one or two other teas as well. But this tea was good, wish all ripes were this level of quality. Is it worth the ridiculous price? I don’t think so. Not even close. I think the Yi Shan Mo at 38.5¢/g is totally worth the price and I like it better than the Lao Ban Zhang which costs four times as much, so do the math. As most people probably can’t afford this tea, myself included, I think the better question is is this tea worth buying a sample of? I’d say so. I would recommend trying out other genuinely high quality ripes first to see if you even find them worth it in your book, but if you’re genuinely interested and don’t find the cost of even a mere 10g sample too difficult to justify, go for it.

This tea brews strong, it brews thick, and the cha qi is really potent. It has probably the strongest chocolate notes I’ve tasted in any tea. I still can’t get past that. The longevity is great too, for a ripe and for a tea that brews this strong. I’m glad this tea was good, but I’m even more glad I liked the Yi Shan Mo better, because I want that tea and can’t afford this one. What’s clear is that Hai Lang produces some great teas.

The most expensive shou I’ve tasted but is it the best? Did Hai Lang make it? Did he make it with gushu LBZ material? Did it remind me of Westvleteren 12, the elusive spicy, earthy chocolate Belgian Trappist ale that many critics call the best beer in the world? Did it steep over 20 times evolving each steep and leave me feeling as though I’d consumed something illegal? Did I answer my first question with a series of other questions?

Mmm, love me some dark Belgian ales… I might have to get a sample

Yes you should! You should also try the imperial grade jin jun mei tong mu guan village also from ys if you like Belgian quads. It’s extremely chocolatey and floral. I too love drinking and making Belgian dark ales but the tea is easier on the waistline…

This was an incredible ripe tea. Most teas that call themselves ripe LBZ are fakes. Not this one. Made by Hai Lang Hao and sold by Yunnan Sourcing at a very high price you know it is real. The first thing about this tea that I really noticed was the Qi. In the second steep it hit me like a steamroller. It kept going for quite a while too. I can still feel it and I am on the 16th steep. This tea was perhaps the strongest tea I can remember drinking. It started out quite bitter. But this bitterness gradually changed into a sweet note. I did not add any sugar to this tea. But in the sixteenth steep it tastes like I did. There were definite fruity notes and perhaps chocolate notes but I am unsure about that. This tea was perhaps the best young ripe I have ever drank. And it is very rare for a ripe tea to have any qi, let alone a strong qi like this one. I am tempted to buy another brick at some point to store for the long haul. This was a spectacular tea when viewed over sixteen steeps.

For the price I paid I was expecting nothing short of spectacular and it was.

Allan, I’m going to buy this one based on your review.