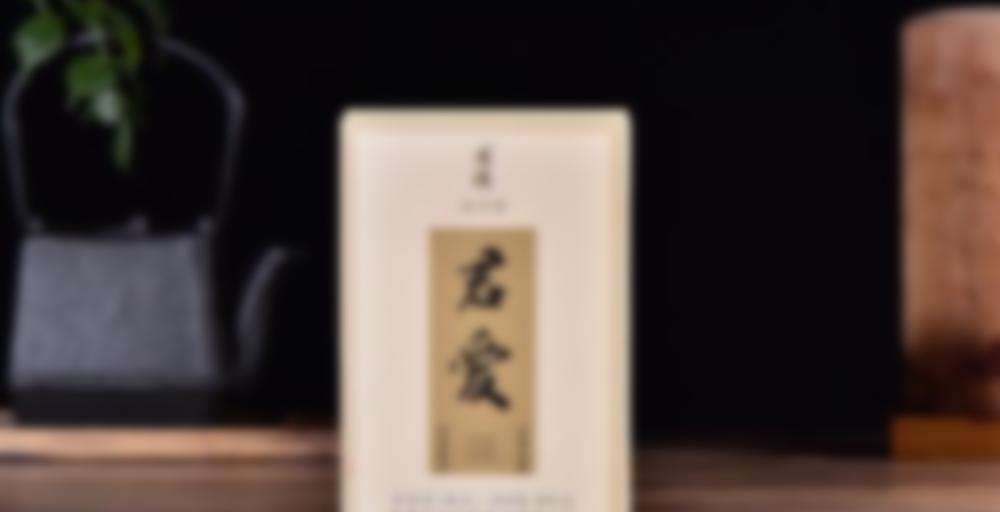 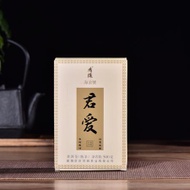 I’ve been wanting to try this tea since it came out, but it’s always been one of the ones to get dropped out of my shopping cart mainly due to the price of even a single session. While Hai Lang’s Lao Ban Zhang ripe was a really good tea, there’s just no way it’s worth its price tag. This one I hoped would offer a similar experience at nearly half the price.

Since I only ordered a 10g sample, I was expecting to have to try to fill my pot to slightly less than full to keep my leaf-to-water ratio comparable to the recent ripe reviews I’ve done, but when I weighed my sample I was amazed to discover I’d been sent 13.1g – precisely the amount I’ve used for two of the last three teas. This made things a lot easier for me. The teaware used was the same as in my other recent ripe reviews: 160ml Yixing zini teapot and a cha hai and teacup both made from Jianshui clay.

I gave the tea a longer close to 20s rinse, which I drank. It was strong. Brief bitterness which quickly transformed into sweetness – trademark of the Ban Zhang area. The sweetness was more specifically a berry sweetness. I could also pick up on some earthy chocolate notes in the finish. Some mouth cooling was also present.

Moving to the first proper brew, I was now greeted by an even more powerful bitterness, a really nice middle of the tongue kuwei. For a flash steep, the body was really good. The taste was very dark chocolaty, not too sweet. The finish wasn’t drying but slightly salivating. After just a few sips I could already feel my head pounding and my eyes began to water. The texture was thick and velvety, simply divine. The mouthfeel was full and expansive. My tongue was beginning to throb and grow numb. The taste is very mature. I’m picking up hints of something alcoholic in the finish.

The bitterness only ramped up in the second infusion. I was assaulted by intense coffee bitterness, which however faded rather quickly. The mouthfeel was perfect. Smooth, the soup gliding down effortlessly. The surfaces in my mouth were left feeling very active after swallowing. As I continue drinking, the initial coffee switches back over to the dark chocolate. As I bring my cup to my nose, the liquor in it smells of vanilla syrup. The bitterness is more persistent now than before and the qi somewhat energizing yet also calming and slightly bliss inducing.

Needless to say I was very impressed.

Unfortunately the highlight of the tea – the mouthfeel – began to diminish from this point on, never being able to recover even with extended steeps. Thankfully the strength held up much better and tapered off much more gracefully. The progression of flavors didn’t prove particularly dynamic, however. The dark chocolate was first replaced by roasted coffee and dark wood. After that Jun Ai became more of a standard shu affair, offering sweet, earthy and mineraly tones. I only did a total of nine infusions, the last three being fairly simple and dull in terms of texture.

So overall Jun Ai left me feeling mixed. It started off incredibly strong, but quickly lost its most attractive qualities. The material is obviously very high quality, but the choice of using only very fine grade leaves seems to result in what I’ve noticed in many other similar teas: the tea brews up strong right from the start, but also brews out rather quickly.

In terms of taste the tea is certainly very nice and enjoyable but nothing particularly special. Similar flavor profiles are not hard to find in other ripes. Similar to many of the other high-end Hai Lang Hao shus, those who appreciate and value mouthfeel and the way a tea feels and makes you feel will certainly find a lot to like here, at least in the early infusions. I was truly excited about those first few brews, but it’s such a shame the fun was over so soon. Not that the tea suddenly turns bad after that, just that it seemed to become just a shadow of its former self.

So I definitely like this tea. I might even say I like it quite a bit. But I don’t love it. It’s been a long time since I had the Lao Ban Zhang ripe, but I feel like I probably enjoyed this one more. The LBZ was too overwhelming for me in terms of its qi; in this one I only experienced some initially, but after that is was a much smoother ride. Whichever you prefer, the two certainly are comparable.

Given all that I’ve said about the Jun Ai, when you factor in the price, it’s not an easy tea to recommend unfortunately. Even at 50¢/g it would be a big maybe. This is undoubtedly one of the highest quality ripes in existence, but that doesn’t mean that the price of Ban Zhang area teas is directly proportional to their quality. Still, this is a tea that could certainly be worth a sample though, for a really special session.

Before beginning to write this review, I’d already concluded that a brick of this wasn’t even a thought worth entertaining. As I’ve been typing this, however, a crazy part of me has began to think “maybe.” I’m not currently putting much money into my other hobbies, so I could certainly afford it if I wanted to. If I were to buy it, it would be in part just to have something luxurious to pull out once or twice a year for years to come, as well as to see how material of this caliber would age in the long term.

A question I found asking myself was, “Would I feel regret drinking this tea if it didn’t change or improve at all over time?” And the answer was “no.” Sure it would be a ridiculously expensive tea to session, somewhat overpriced certainly, but ultimately we are talking about the cost of a movie ticket or two annually. I can’t even dine at a fine restaurant for that price. And if the tea did improve – or simply change – well, that’s what the tea journey is all about.

So did I just convince myself to buy this tea? I don’t know. We’ll have to see. I certainly can’t recommend anyone else to do the same and claim it would be a rational thing to do, but we humans as much as we want to convince ourselves that we are beings based on reason and logic, ultimately after all the painstaking logical thinking we tend to follow our heart and make the choice we want to make, not necessarily the one we concluded we should make.

Edit: So yeah… I may have just ordered a brick.

This is an excellent ripe tea. It was strong with a bittersweet taste at first and a moderate amount of fermentation flavor. It got much sweeter as the steepings went on. There was a strong and relaxing cha qi from about the second steep that lasted until around the fourteenth steep. I gave this tea sixteen steeps in total and then steeped it a few more times for photographs. This was no cheap brick but nearly a dollar a gram brick. Even though I got it during Scott’s best sale of the year it was pricy. It was extremely well compressed. It dented my nice new tea tool which was annoying as the thing was made out of solid brass if I remember correctly. In the end I broke out my tea awl and that it did not dent. The steel of the awl was stronger than the brick. Overall this was one tasty tea. I would say that the bitterness lasted well into the eighth or tenth steep at least. The fermentation flavor did not last that long but I wasn’t paying close attention to the notes. I was too busy enjoying the qi of this brick, which of course is very rare in a ripe but Hai Lang Hao knows how to process a ripe tea so it retains it’s qi.

I have a sample of this too, waiting to be tasted!