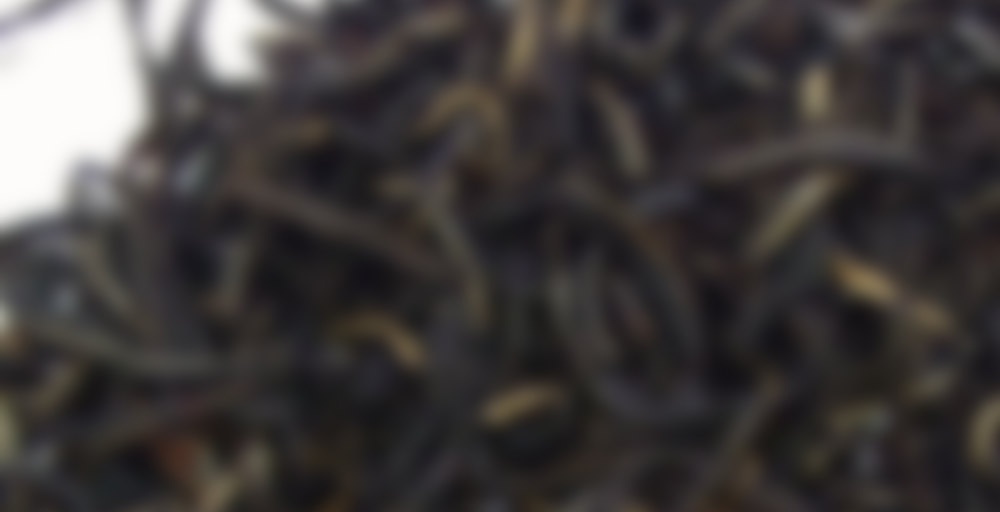 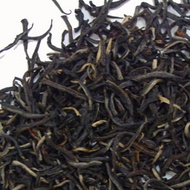 The taste of New Vithanakande is very “round” and satisfying  a great tea for afternoon enjoyment. We love the look of the black leaf with a silver streak running through it.

Details:
This tea is made in the low altitude Ratnpura district which mostly makes undistinguished teas. New Vithanakande is a wonderful exception. The Pilapitiya family has carefully made better and better teas for the past decade. It appears that they have learned from the best Chinese tea makers; they have slowed the process down and include steps like processing with mists of water. This allows the fatty acids found inside the tea leaves to fall apart and recombine into compounds that taste like apricots and chocolate.
Dry Leaves:
Narrow, twisted, very dark brown leaf segments about 1/3 of an inch long, with fine silver tips mixed in. It is very rare (maybe unique) to have both black leaves and silver tips. Most times the tips would be golden.
Liquor:
Russet brown.
Aroma:
This tea is a lovely blend of honey, unsweetened chocolate, and faint apricot notes.
Caffeine Level:
Caffeinated
Body:
New Vithanakande is a mouth-filling tea. A real treat.
Flavors:
An intense blend of unsweetened chocolate tempered by a honey sweetness and a bit fruit.
Brewing Time:
4 to 5 minutes
Brewing Temp:
212° Fº

Inspired by all you busy little de-cupboarders out there, I decided to start tackling some of my most elderly bits and pieces of tins. This definitely qualifies. Five years old, easily. Since we know older tea loses its edge a bit, I doubled up on the leaf this morning, and by golly! Apricot! (Saw that notation in Harney’s product description, but never got it until now.)

Happy day for finding the flavors in the description! And working on decupboarding.

Wow! I own this tea and didn’t remember the part about apricot. I rarely drink it, but knowing this I will have to revisit it. Thanks!

I’m chintzy with the dry leaves and I think that’s probably why I miss out on a lot of good subtle stuff.

In this steeping I’m getting a lot more cocoa than my original note indicated. I prepared the tea the same way, so I’m not sure why.

I still get a little bit of throat bite with this one, but it’s not as pronounced as I remember it. There’s a freshness to the mouth feel after drinking that’s quite pleasant. Like a wake up call to my mouth.

I wonder if some of the difference can be attributed to the age of the sample. It was in a ziplock, and it still has a lot of aroma in the packet, but perhaps there’s some mellowing that has occurred.

I can’t buy every black tea, can I? So I think I have to make a tough call on this one. I’d happily drink it if offered again but I am going to make myself live without it on the shopping list, just because there are so many other wonderful Harney & Sons black blends that I love more.

ETA: I thought I’d prepared this the same as the original, but I may have increased the water to leaf ratio some. This could account for the lower “bite” factor. The aftertaste to this one is so pleasant it’s making me want to rethink my decision about the shopping list. But I think I have to stick with the hard choice, at least for now.

New Vithanakande is a staff favorite ceylon. It smells of honey, unsweetened chocolate and lofty apricot notes. When steeped, the cup becomes a bit more intense rather than sweet with a lemony astringency backing the raw cocoa notes.

Sri Lanka’s low-grown teas are generally poor; the region lies only three hundred feet above sea level, and in the tropical heat and humidity, the teas become dark and unremarkable. Most are sold for negligible amounts as bulk teas. To make any money, the low-altitude Ratnapura district tea gardens had to innovate. Some entrepreneurs figured out a way to keep the tips white, and now the district is famous for its silver tippy teas. New Vithanakande is the best of the bunch, with small leaves like most Broken Orange Pekoe teas, yet flowery with the most unlikely of black tea components; silver tips. Ordinarily, tea tips turn golden yellow during black tea production. New Vithanakande preserves the tips’ silver hue.

The tea makers begin by withering the leaves very briefly, then rolling them for just fifteen minute, using hardly any pressure on the leaves. Instead of rolling them on a table between pressurized disks, they pour the leaves into a vertical cylinder with a sieve at the base. As the cylinder slowly spins, the leaves rub up against and lightly macerate one another. Kept whole and undamaged, the tips don’t oxidize while the rest of the leaves do. Thus the tips stay a shiny silver.

As the leaves jostle about, the finest, smallest and most delicate ones fall through the sieve. The rest of the leaves – about 99.5% – are transferred to a rolling machine to become ordinary bulk low-grown tea. The smallest and most delicate leaves are left to oxidize for about two hours, much more than most Ceylon teas. They are also blasted with moist air of the sort that jets from a humidifier. This moist air may provoke the leaves to form their characteristic cocoa and chocolate flavors. Like Keemuns, the New Vithanakande teas are fired at a hotter temperature than other Ceylon teas, which likely creates a Maillird reaction to reinforce the cocoa flavors.

After firing, the tea makers spread out the leaves on a fine-mesh strainer and sort through them by hand! Every other BLT (British Legacy Tea) is processed entirely by machine but the makers of New Vithanakande sift the leaves, gently working the smallest particles through the strainer. The silver tips are larger and remain with the tea; the smaller golden tips fall through to the floor. The result is a delicious, surprisingly engaging low-grown tea, as beautiful to look at as it is to drink.

Interesting to hear that this one still gets hand processing. I must try it!

Thank you for this deeply informative and very enjoyable review!

Oh man, the more reviews I read, the longer my shopping list gets.
I love all of the H&S reviews. I’m very happy to have you on Steepster.

I have to agree, please keep all of the information coming.

This doesn’t taste like most Ceylon I’ve had, I must say. It has a bittersweet element, I’m guessing that’s the chocolate/cocoa note the copy describes, that is unusual and quite appealing. At first it didn’t seem particularly drying but as you drink down the cup and it cools that builds, but (at least to me) it’s never out of balance or problematic for a breakfast tea, meshes well with that bittersweetness. I really like this, could see drinking it in the morning. Onto the list of “Harney breakfast teas I could definitely see reordering and burning through first thing” it goes, and my what a stable of teas that is. I’m also a tad curious how this would taste blended with something like rose scented, yum.

This tea has a mild, sweet aroma. The flavor is very brisk and dry. It has a slightly bitter aftertaste, the bitterness increasing with each sip. It remains too dry for my taste even after reducing steep time from five minutes to four. I find the sour aftertaste quite unpleasant, but perhaps this is just a matter of individual taste. Unfortunately adding cream and sugar didn’t seem to help much. Oh well, can’t love ‘em all I suppose.

Since I’ve been focusing so much on Ceylon teas recently, I decided to purchase this one from Harney & Sons last year in the hopes that it would become one of my regular teas. I was not disappointed with it at all!

The dried leaves are twisted, full leaves—not rolled or broken. Mostly dark brown/black, with some tips, which appear to be more silvery than gold.

I did my usual steeping of 9 grams of dried leaves in 20 ounces of near-boiling water. I went slightly longer at 4 1/2 minutes instead of my usual 4, since the instructions from H&S said to steep for 5 minutes. I am glad I didn’t go the full 5, though—4 would be enough, I think.

The brewed liquor came out very dark and full-bodied. This is what I think of when I think of black tea. The initial flavor I picked up was a creamy, smooth flavor of cocoa—slightly touched with a honey flavor but not the sweetness. It was very, very good.

As far as Ceylon teas go, I would love to have this regularly. At $15.00 for 4 ounces, though, the price reflects the quality and guarantees that this will be a tea I will turn to for those days when I want quality, not quantity. I highly recommend this one for an example of a good quality Ceylon.

Decent Ceylon, very respectable. Not my favorite, as it can easily be over brewed and get a bit bitter. I prefer a brighter taste to my Ceylons. Surprisingly good iced.

One of my favorite teas. A bit mild for the first tea of the day, but very very tasty. I like it for an afternoon tea.

This is the tea I go to when I want a good cup. I agree I do enjoy it in the afternoon too

Wow! this is something different than what I think of as “Ceylon” teas. Clear, rusty brown brew. Excellent flavor with a green tea and slightly grassy finish.