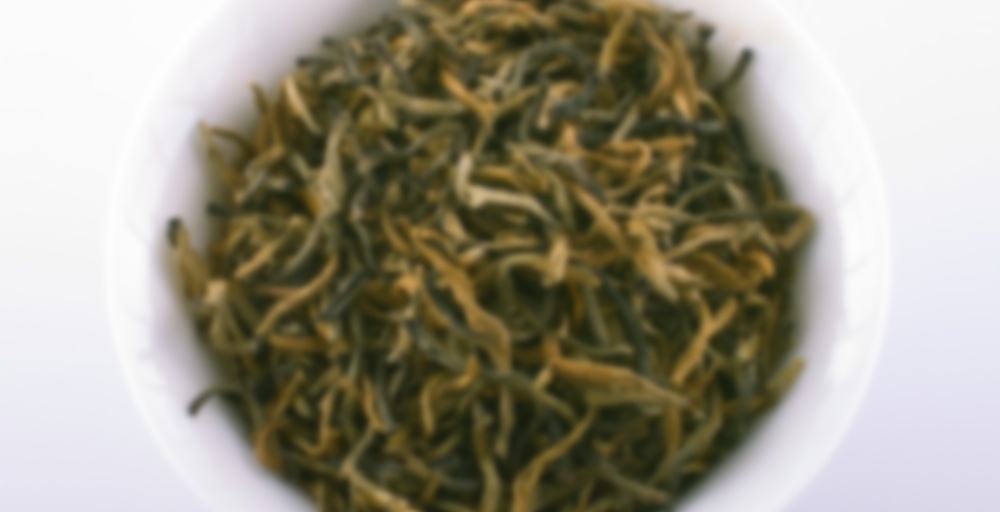 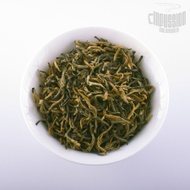 Also called Pure Gold from Yunnan. This is not your ordinary black tea. It doesn’t look like it and it doesn’t taste like it. If you would like to learn how to appreciate black tea without adding sugar, this is your best bet. Made only out of buds, it’s mildly sweet and bitterness is almost non-existent. Delicious honey and malty notes with clean and crisp tannic aftertaste. Deep and sweet aroma. This is the black tea experience redefined.

I really enjoy yunnan black teas. HOWEVER, for some reason this tea tastes unsettling. The flavor is VERY fungal. I mean this is drinking a mossy mushroom sandwich, however in this sandwich instead of bread it tastes like there were portabello’s. I was able to try a sample of this from my friend Heidi!. We tried it rinsed, unrinsed, a variety of times, and tempuratures but no matter what I did it still tasted like mushrooms. Sorry infussion, we have a few more to try from y our lineup…I’m sure I’ll like something else…Next up on the list from infussion…Lapacho.

This is a new genre of tea for me completely. It tastes like seaweed and spinach. Mellow and soft, it is not unpleasant but certainly new. It does not need anything to supplement it- I think this is a taste you acquire, I have not succeeded yet, it is just culturally very new and I will have to keep trying it and see if it sticks. Smells like warm seaweed, not overly strong, but not like anything else I have ever tasted in tea. Funky.

I assume she meant new to her taste buds!

CORRECTSHESAID! I believe people have taste buds according to their typical diets, and I have not been exposed to those in this tea frequently, yet. While not unpleasant it is just new to me.

I agree, that’s how i felt about laoshan black! Doesn’t mean it will never appeal to me!

Black tea craving and super gaiwan usage recently which pairs this and my new dragon gaiwan up very nicely. I found this tea at the back of my cupboard from my last Infussion tea order not long before it closed down.

The raw leaves are a beautiful mixture of brown shades with golden tips being roughly 3/4 of what is present, those being very shiny and reflective. I do love shiny leaves. They are quite long with a rough average of 6mm, though some are straight while others are curly so it’s hard to tell specifically. Sniff-spection reveals a strong wooden scent with a hint of smoke. Very thick scent, was surprising. Perhaps one of the ‘darkest’ golden tips that I have tried, it smells more like full leaf Dian Hong ie not sweet or creamy like the golden tips I know and love.

First Steep – 15 seconds
It also tastes as strongly wooden and smoky as it smells. Despite a short 15 second steep It’s already very strong, just like a main steep. It does have some sweetness in the after taste but very mild against the smoke.

Third Steep – 45 seconds
A little astringency has now appeared behind the smoke. Still getting strong roast chestnuts. The sweetness has vanished.

Fourth Steep – 70 seconds
Lighter in thickness and a little less smoky than previous steeps but I would still say it’s the main flavour. Pure smoke and smoky chestnuts…nice but not what I expected at all.

Fifth Steep – 90 seconds
Similar to the first steep, all that remains is burnt wood.

Overall – This was like no other golden tips I have tried before. I expected malt, sweetness, raisins and cream…instead I got smoke, burnt wood and roast chestnuts. Definiately more like Dian Hong full leaf than the golden tip in flavour. What I saw looked like golden tips (mostly) but it tasted like Lapsang Souchong and Dian Hong. It was nice but not what was expected. Not sure if this got contaminated on their end? It was unopened and still sealed my end and was not near anything open. Very strange.