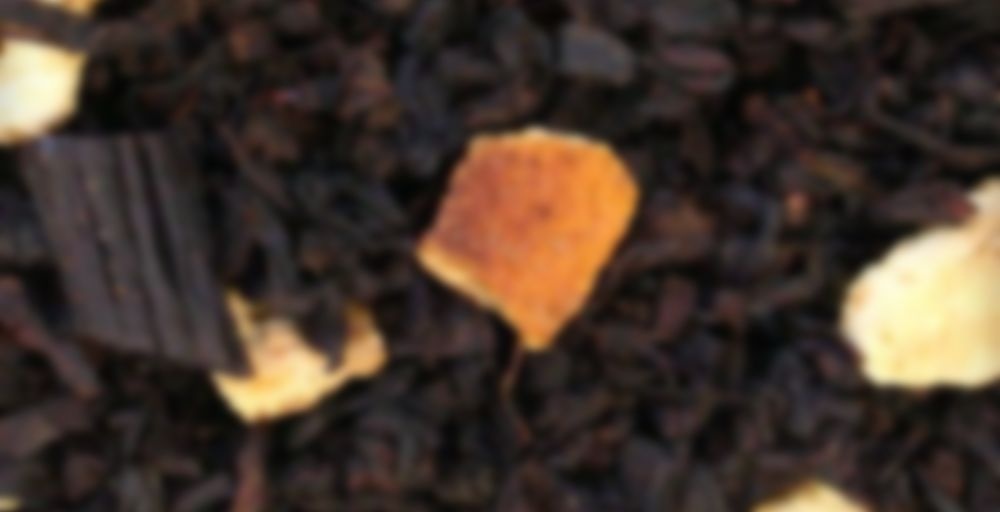 A coworker found a nice teacup set for a bargain at a local thrift shop and is giving the cups away as graduation gifts to her friends and asked where to get good tea, and of course my answer was, “Around here? Honestly, from me.” So this was one of the teas from my stash she asked for, and after measuring out her sampler, I just had enough left for a sipdown. A single ounce can go pretty fast when you are a charitable individual. :-)

I got this tea from Snake River Tea in Boise last May, where they call it “Orange Vanilla White Chocolate,” but thanks to my Nancy Drewing, I’ve determined that they stock it from major wholesaler International Tea Importers (hey, at least I can applaud them for having teas that aren’t just Metropolitan Tea Co.). In any event, expect to see this same tea all over Steepster under various names and with various tea shops as the “company” name. ITI teas are wholesaled all over the place!

This tea does have a very nice dreamsicle flavor. This is a flavor combination that I typically find in rooibos, and I have to say, I probably do prefer the dreamsicle rooibos teas I’ve tried as that base seems to compliment the orange and vanilla notes a bit better with its natural sweetness, but for a black tea, this is all right. The citrus adds a nice warmth to the cup and the vanilla brings a sweetness that keeps the dark base from having any bitterness. There is only a very mild drying astringency left after the sip, and the orange and vanilla flavors are still very prominent on the tongue. My only complaint is that it’s a bit easy to tell that the flavor here is very much the product of flavoring — it isn’t unpleasant, but has an obvious artificiality to it. It’s that bold sort of orange taste that just comes off to me as trying a little too hard, but to be fair, at least paired with the vanilla, it tastes better than the mandarin green and white teas I’ve had where the orange just tastes way too fake and unpleasant to me, so I really don’t mind this. The vanilla, too, has that sweet confectionary vanilla taste, as opposed to the more subdued, creamy essence of vanilla I get in teas that use vanilla beans. So you get quite a whollop of flavoring here, which may or may not be your thing, depending on your tastes. In a tea with a lighter base, I’d probably be more turned off from it than I am, but in a dark black base like this, eh… it’s doable. Not my favorite, but certainly a pleasant enough cup. For my last teaspoon I’ll probably try it with a bit of vanilla almond milk, and see if latte-style adds a bit of creaminess and cuts back some of the overwhelming flavor. That may be the way to go with this one.