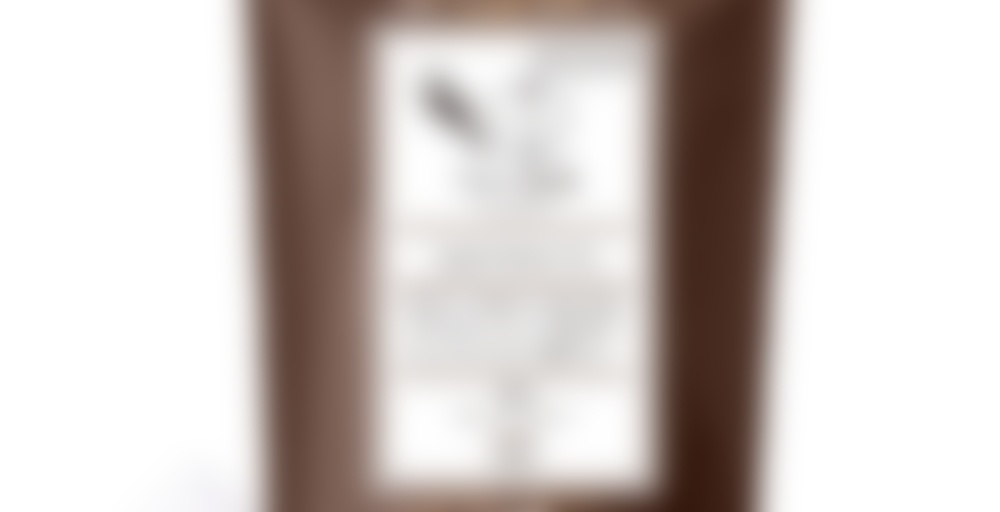 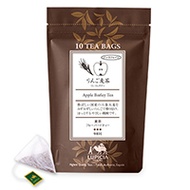 Seventh tea for March Mad(Hatter)ness! This is for the herbal tea round, going against Tea Chai Te’s Lavender Sunset.

Back in 2018 I purchased several different flavored mugicha teabags from Lupicia. I know I tried the lychee, and recently sipped down the apricot, but I still have the apple and plum sealed. Thus far, my general feelings on these mugicha is that I like them, because I like mugicha, but there hasn’t been anything about the novelty of flavoring the mugicha that has really set it apart for me. The roasted barley itself is just such a strong flavor that the fruit doesn’t really hold up against it, and often tastes a little strange compared to those flavors. So I’ve been fine with the ones I’ve tried so far, but haven’t really felt a need for more of them over just straight, plain, good ol’ Hida Mugicha.

Opening the bag, the dry leaf has a very strong apple aroma! I used one teabag in 500ml water (as the instructions suggest), but like most herbals I just leave the bag a’soakin’. I will say, having brewed this one up, that I am getting the apple in the aroma; it’s a sweet green apple note, but the roasted barley is a much stronger aroma, as was the case with the other fruity mugicha by Lupicia I’ve tried. It’s a deeply pleasant coffee roast sort of aroma.

I do taste the apple, as a sweet fruitiness that hits the tongue at the beginning of the sip, and in the aftertaste. Definitely a green apple sort of flavor, with maybe just a touch of a honeyed note. The roasted barley fills out the mouth quickly and then overpowers that flavor, with a deep bittersweet roasted coffee note. As that flavor dissipates on the tongue, the sweet apple reappears as a ghosting aftertaste.

This is a deeply satisfying cup, but is still inline with the other fruity flavored mugicha from Lupicia I’ve tried; it’s a fun novelty, but nothing about it particularly stands out as me needing it over plain mugicha since that is such a strong flavor. I do think I like the apple flavor a little more conceptually than the apricot or lychee; both of those were great flavorings and still were overpowered by the barley, but the apple with the barley creates more of an “autumnal” feel to the cup.

This is my last sachet of this flavor.

I really enjoy these fruit barley teas, the coffee-like deep roasted barley has such an interesting interplay with the sweet fruit flavor. In this case it’s a crisp green apple, and it’s sort of similar to a Jolly Rancher. But for some reason, it works for me. There’s a clear sweetness from the barley, which also helps temper the roast a little bit. Such a nice cozy and satisfying tea for the evening…

I don’t feel the need the restock this one, as I prefer some of the other flavors – namely the watermelon, lychee, and pineapple versions. And I have plenty of those from my Lupicia panic order. XD

Last I saw, they only bring these back during the summer, and I don’t remember Watermelon or Pineapple being on the docket anymore. I finished my Apricot bag not long ago.

Aw, that’s a shame about the Pineapple and Watermelon flavors… I have two unopened bags of each if you’d like some though! ❤

Bleh, I don’t like the fishiness of the barley teas. I ended up adding sugar and milk to the second infusion and that was better, but I just don’t like that weird smell. It really overwhelms any apple flavouring otherwise present here. Kind of disappointing, but not entirely unexpected.

Gonna try and get a few more reviews in from my queue; in less than an hour Tre’s four best friends from highschool are gonna be showing up for the night to visit and I doubt I’ll be able to focus a whole lot. It’s gonna be such a “nerdy frat boy” environment, what with there being five guys in their early twenties, who haven’t seen each other in months, in such close proximity…

Thanks VariaTEA for passing on a sachet of this one! It’s not one of the barley teas I ever found making its way into a cart for a mock order (ie. Pineapple or Watermelon) but I was curious about it, and having now tried Pineapple Barley from Lupicia I think it’s worthwhile to compare the two see if some of the things I observed with Pineapple (aka FISH SMELL) are consistent with this one.

I think Barley tea is gonna forever remind me at least a little bit of coffee; that’s definitely what I imagined I was first tasting when I had a sip of this one – it’s just really, really roasty and strong. And I suppose I don’t drink coffee enough to really differentiate in the first place. Blah. Not that it reminding me of coffee is really a bad thing, per say?

One definite positive thing about this one is that it doesn’t smell OR taste like fish at all. Hooray! So, in that aspect this far surpasses the pineapple barley. The downside? Compared to pineapple this is far less juicy/flavoured – yes, I tasted apple – a more supple red apple flavour like a Gala perhaps, but it was so much lighter than I was led to believe it would be after tasting Pineapple first.

I guess I’d call this average overall. Since I didn’t have high expectations in the first place I certainly wasn’t let down at all – it kind of just met my mild expectations for what they were? Uh, mild?

I wonder what Barley tea tastes like but as I am allergic will probably never know.

It’s really similar to the roasted buckwheat teas, AllanK, except with more of a chicory/coffee flavour. I haven’t seen a flavoured buckwheat tea, sadly. But the plain one (I liked the H&S one!) is really nice with milk and sugar.

The dry leaf of this smelled so strongly of juicy apple cider that I was expecting a cup of fruity deliciousness. However, as soon as the water hit the tea bags, the scent of barley took over. Tastewise, this is like 98% barley and 2% apple cider which is not necessarily a bad thing but it is also rather disappointing given the scent of the tea bag. We’ll have to see how the cold brew goes…