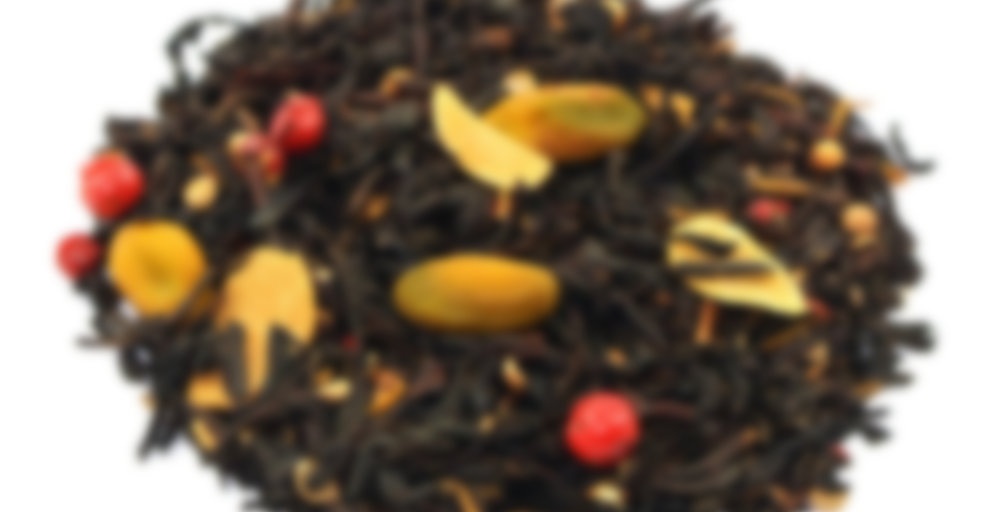 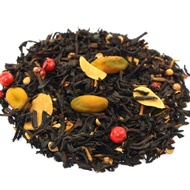 Considered one of the few recipes of truly Canadian origin, butter tarts were common in pioneer Canadian cooking. Recipes for the delicious little tarts vary by the families that are cooking them, but the basic ingredients consist of butter, sugar, syrup, and egg. Although these seem like simple ingredients, when combined into a flaky pastry and baked until the filling is semi-solid with a crunchy top, the results are incredible. Traditional butter tarts also include raisins, but walnuts or pecans are commonly added as well. This tea is sure to satisfy your craving for a sweet little tart! Enjoy!

Butter tart? Yeah, I don’t think so. It’s sweetish and buttery but then the cumin and peppercorn pop up. It’s almost like this tea is trying to be both a main dish and a dessert. Do I like it? At times. Do I hate it? At times. Honestly I just don’t know what to think of this. It’s certainly been an experience.

Cumin? Doesn’t seem like it fits with the name at all.

No it definitely did not work in the cup.

HGTTB like others have mentioned…this one is weird. This is for sure nothing like a butter tart. So all best are off in terms of rating. It’s not a bad tea…but it’s not butter tart. instead it’s a sweet, sort of weird tea. there’s a bit of spice from the peppercorns but overall it’s just not what it claims to be heh

I picked this at random; I’m having a hard time making a decision lately. The dry leaves smell sweet like frosting but with an undertone of spice. I brewed this western and waited to see what was in store for me. The wet leaves give off an aroma of an english bakery. I can smell nuts, spices, sugar and butter. The flavor is somewhat different. It has a greasy flavor. The spices are muted and the sweet flavor becomes syrupy. The most distinctive taste is the peppercorn, which sticks out and seems random. This really isnt a tea for me, but I believe it would come to use in the kitchen.

Cumin in tea is weird. This tea is… odd. Not gonna lie. I do not think of butter tart I think more of a main dish then a tart. It’s a bit spicy. Not like chai but …I don’t know know how to explain it. Nice earthy base mixes well with this tea. I won’t rate this one since it’s not bad but I just am not a fan.

This is such a unique tea! From the name, I would expect something smooth and sweet and buttery…and it is! But it’s also unexpected spicy and slightly savory thanks to the cumin and peppercorns. It’s an odd combination of flavors, but somehow they all work together quite well and I ended up really enjoying my cup. I don’t think this is something I’d reach for often, but I’m glad for the opportunity to try it out!

The dry leaf is very pretty, speckled with pink peppercorn, pistachio and almond slices. Both the name and the picture drew me in and tempted me to try this one. The leaf smells sweet, of almonds and a hint of cumin.

Steeped, the cumin and pink peppercorn take the lead on the nose, which is weird and interesting.

I drank this with a teaspoon of sugar, and again confusing. Because I really taste the cumin a lot, which makes it feel very savoury, but there’s also this melange of flavours that really does give the impression of butter tart. But then cumin. But then I don’t think the butter tart flavour would be there if the cumin wasn’t! It’s not really buttery but there’s the sensation of eating pie crust and the rich sweetness of the butter tart filling. But cumin! And then raisin on the finish which is perfect.

I dunno. I think I like this quite a lot, even if it’s confusing. It actually kind of reminds me of cumin shortbread cookies that I bought once. I was kind of weirded out and bothered by the presence of the cumin, but also, I couldn’t stop shoving them in my face.

I think this is a tea that’s definitely worth a try for its uniqueness and complex flavour, but it’s probably also a tea that a lot of people won’t like.

Oooooh I wonder if this is the same blend as Tealish’s Patisserie? I will never forget the cumin-punch that came with every mug of that tea . . .

Hmm, they do look extremely similar, quite possibly identical. I hope not – LuxBerry sells on Etsy, so I bought with the assumption that their blends are unique and handmade.