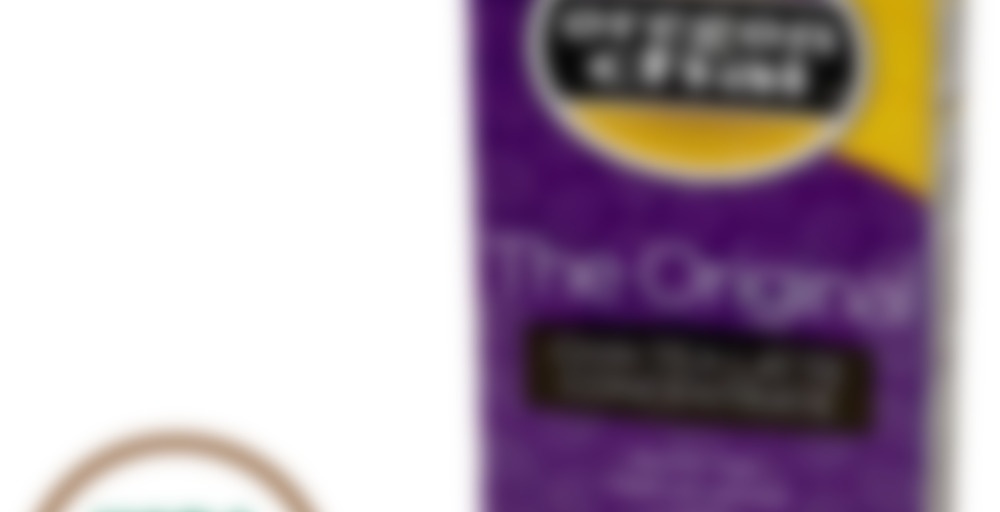 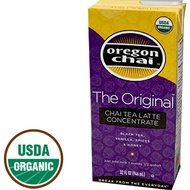 by Oregon Chai
81
You

This is where it all started. Where creation evolved to a higher plane. Where the sweet and spicy blend of black tea, honey, vanilla bean and spices brought perfection to your world. Experience nirvana after every cup – morning, noon or night.

My sister bought me this a few years ago for Christmas and I liked it. She bought me more last Christmas, and I decided to have some last night. After dinner I wanted something quick and sweet and this fit the bill.

If you’ve never had it before, this is black tea powder, sugar, dried whole & nonfat milk (why both I ask myself?), dried honey and natural flavors. Now I don’t consider this a true Chai-mainly because of the tea powder. It does have plenty of other delicious flavors, and tastes like a sweet Chai tea. IMO, it is too sweet, and the black tea flavor is there, but not strong enough.

It is a dessert Chai, and that being said was just what I was in the mood for. It is delicious, and quick. I also prepared two other quick teas, so I could watch the 136th Annual Westminster Dog Show! :)) I love dogs (and most animals), and I watch it every year. So, I began preparing two other teas I’ll review later. I spent the next 3 hours watching the competition next to my dog Lotis. :)) More on him later!

The sweetness is what I didn’t care for in this concentrate either. I like my chai on the spicy side! :p

Yeah, but I do like it occasionally as a dessert, but it is not a true tea.

Yeah, but I do like it occasionally as a dessert, but it is not a true tea.

Is the black tea powder simply made from grinding leaves? O.o

I missed the dog show, I was busy being eaten by our three rescue puppies. I am hoping hubby will fall in love with one or two of them and let us keep them! :) He needs a new canoeing buddy.

I think so Tamm.

I hope he’ll come around Ash!

I bought this on a whim and it is decent. Not something I usually go for, but good once in awhile. I wish it was a bit spicier but it is overall well rounded in flavor.

This was the first Chai I ever tasted. That’s not saying much, since I’ve only had two others for reference. I love it. I adore strong tea with milk and honey, and Oregon chai is made for that combination. It’s not quite sweet enough for me, so I add sugar or vanilla espresso flavoring syrup. The other chai teas I’ve tried have been way too spicy and harsh for my taste, so I’m guessing this may be mellower than others. In my area most espresso shops offer this on their menu, and it’s a favorite of mine.

I started drinking this tea a few years ago in one of my trips to Mexico City. I was in a coffee shop down there and a big purple can caught my eye because it said Oregon on it and that’s where I live. So I asked the attendant about it and he recommended it. Now I am hooked on it and it turns out it is actually produced in Oregon.

My favorite chai concentrate! I’ve tried to make my own concentrate before and it’s always terrible. This one is pretty sweet and tastes good hot or cold. Way better than Tazo!

This is my favourite chai concentrate. I like to freeze it in icecubes and make a slushy out of it in the summer. In winter I usually mix it with milk. Lots of spices and very flavourful.

I used to LOVE this stuff! I saw it a while ago while shopping and picked up a carton, just opening it today. What I remember was the intense mix of spices and the warming kick of pepper. What I got today was way more toned down in the spice department than what I recall and WAY sweeter too. Like sickly sweet. I had to add a ton of milk to cut the sweet which also cuts the spice. It is funny how our tastes evolve and change! I may be dumping the rest of the carton and searching for a good spicy chai alternative.

I remember being what felt like addicted to this back in the mid-90s. I was drinking 4 or 5 latte bowls of it through out a morning at work to the point where I was taking in so much caffeine, sleeping restfully was getting to be a problem, so I gave it up and moved on to other teas. Maybe 10 years later I picked up a carton for old time’s sake and found it abhorrent. My neighbor took it off my hands.

Have you tried experimenting with your own chai spice mixture? I rarely drink chai at home these days, but when I do, I always add lightly crushed black peppercorns and brusised green cardamon pods to the mixture.

I have not tried blending my own chai, but I just might give it a go! I know clove, cardamon and peppercorns are common chai spices, but I’m not sure what all they put in the mix. I’ll have to do some digging!

I think the most important thing is to play around with spices to get a blend that pleases you-some combination of five basic spices: cardamom, ginger, clove, black pepper and cinnamon. Try adding Other spices like star anise, fennel, nutmeg, vanilla pods, coriander, allspice. I think like chili or lentil soup, there are hundreds of spice combos/variations for masala chai. The fun is in blending and drinking.

Sounds delicious! I used to love that chai!

I discovered this in 1998. Fell in love. I could live on it! ~ Now, in 2013, I wonder if the formula’s been changed. My tongue says, “Less flavour; more sugar.” The brew seems thinner … Why is it that once a company gets big, the product quality goes down?

This was my first introduction to chai, other than purchasing at STarbucks, etc. In retrospect, after tasting other chais, I find this too sweet and weak for my taste, needs more boldness and spice.