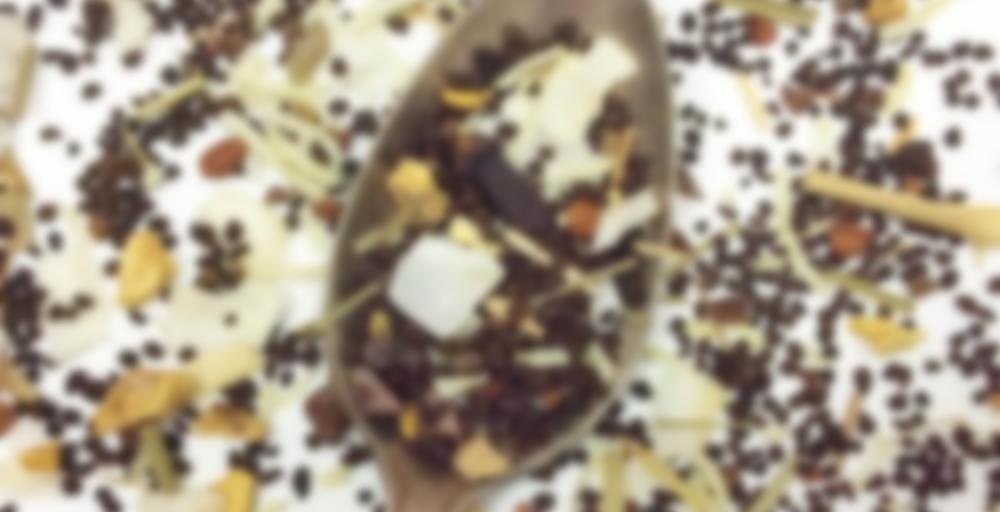 by Plum Deluxe
81
You

You asked us for a coconut chai tea and it’s here – a coconut chai black tea. There’s something about a classic masala chai paired with fresh coconut that we just can’t get enough of! In this case, we’re using a malty Assam black tea, which gives this chai a robust base from which to blossom its fragrant and forward topical and spiced flavors. Great hot or iced, pour yourself the most uplifting cup of tea you’ll ever find.

Really good as a concentrate to make chai!

Thanks for the sample, Plum Deluxe! I’ve had this once before, but tried to make two cups out of one sample so it was basically flavorless. I did it right this time and used the full sample with six ounces of water. Delicious! It has a bold base and just enough spice. I didn’t taste a lot of coconut, but it could have been the ratio in the sample. I probably won’t buy a full bag of this because I have another favorite coconut chai, but I wouldn’t say no to another cup of it either.

Thanks so much for the samples, Plum Deluxe!  There wasn’t quite a teaspoon in my sample.  It’s a CTC black tea with lemongrass, coconut, cocoa nibs and spices.  The name is quite accurate here, as rather than a dark, spicy chai, it is very BRIGHT and “uplifting”.  If bright had a flavor, it would be this.  I think it’s the fruitiness of the lemongrass, possibly the ginger making it so bright.  It’s very smooth, probably the coconut.  The black tea itself doesn’t steep up too dark, considering it’s a CTC and usually those become quite brisk quite quickly, even with the six minute second steep.  I didn’t taste chocolate but that might be a little weird here, with the lemongrass.  I did notice at least one cocoa nib.  I’ve had some chai with lemongrass before and didn’t like it at all, so I’m pleasantly surprised with the melding of flavors this one has.  I’d grab this one when I’m craving a light, fruity chai.  The second steep was just as good.
Steep #1 // less than 1 teaspoon for a full mug // 11 minutes after boiling // 2 minute steep
Steep #2 // just boiled  // 6 minute steep
2020 Sipdowns: 12

I just went on Teavivre’s website and it looks like they aren’t even shipping tea out because of the coronavirus. Wow. It’s scary. I hope everyone stays as safe as possible, both in China and throughout the world.

Recently I was sent some teas to sample from Plum Deluxe, so thank you very much, Plum Deluxe! This tea was a free sampler in the package, and as soon as I’d finished sipping down the bag of tea I’d been working on as my daily drinker I wanted to brew this up, since I have a terrible habit of stashing coconut teas, forgetting about them, and then having the coconut go rancid and never getting to try them. What a treat it will be to drink a freshly blended coconut tea for a change!

The dry leaf had a lovely aroma of spices and coconut, but after steeping, the leaf reminded me of lemon ginger tea, with a bit of cinnamon also hitting my nose. The tea itself has a really pleasing aroma of coconut, lemon (a bit more like lemon zest or lemon cream, actually), and spices (I can pick out ginger, cardamom, and cinnamon in the aroma). With just a single-serving sampler I decided to try this chai straight rather than adding any additions (if I’m going to make a chai latte-style, I often go for a stronger brew that will withstand the addition of the milk) which often makes me worry that it will come off a bit strong — many I’ve tried are either quite astringent in the black tea or too spicy unless milk is added — but this was surprisingly very smooth taken straight. I am a person that likes tart/sour flavor profiles and the lemon/citrus is a pretty dominant flavor in the cup which I immediately found quite to my liking; it hits with the spices at the beginning of the sip, and then a very sweet coconut flavor comes toward the end of the sip and lingers on the tongue. It’s a very nice balance. The ginger spice really pops in the blend and compliments the citrus nicely, but it isn’t strong, burn-your-mouth-off ginger that leaves that unpleasant tingling on the throat for spice-wuss types like myself; it’s just a nice, pleasant warming effect. I can pick up a bit of clove and cardamom as well, and a touch of cinnamon sweetness. The base tea is just a bit malty and holds the flavors well.

I’m really enjoying this; it has a nice sour-and-sweet balance and as a chai, holds up well as a naked cup, which I certainly can’t say for all chais I’ve tried. No doubt it would likely also taste great steeped strong and mixed with some coconut milk as well. I’m really enjoying the lemon zing and sweet coconut on this cold and rainy winter Idaho morning.