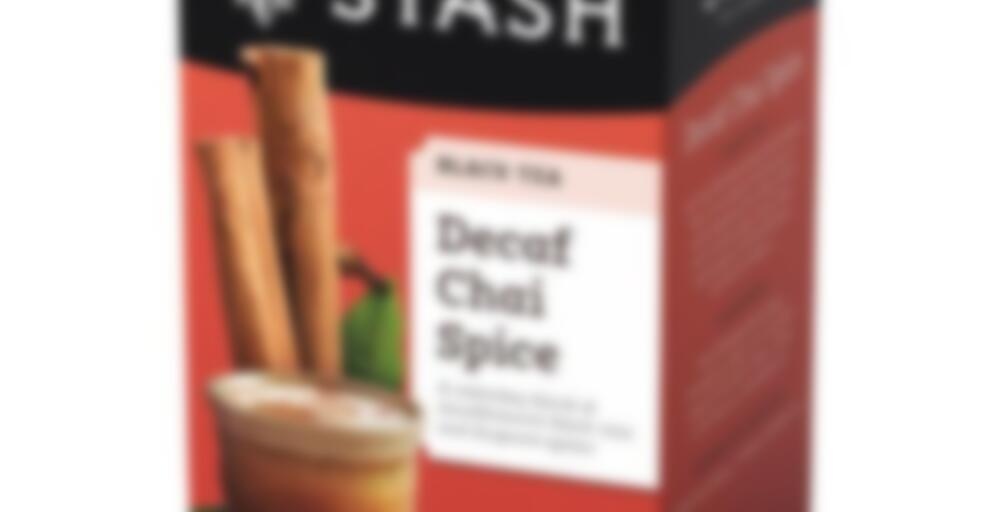 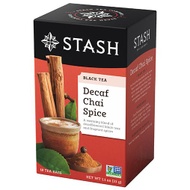 If Stash Tea was a Spice Girl, we’d be Decaf Chai Spice.

Let’s start with the basics: What is Chai tea? In its simplest form, Chai is a mix of spices in a robust black tea. Our Decaf Chai Spice tea is made with a base of naturally decaffeinated black tea from India and blended with 7 premium spices and flavors. If you’re curious, the chai tea spices we use are cinnamon, ginger root, allspice, clove bud oil, and cardamom oil.

Chai tea’s popularity has grown massively over the past few years. And we are proud to be right there leading the way, breaking traditions by bringing you not just the regular chai drink, but also decaf, caffeine-free and adventurous chai flavor pairings. That’s how we came up with so many different flavors of chai like Decaf Vanilla Chai and Spice Dragon Red Chai! We’re continuing our exploration of this robust and versatile tea by creating flavorsome recipes using our teas.

Very astringent and bitter black tea base, but I enjoyed the spicy blend of ginger, pepper, etc. There is a lot of licorice in this tea, but I still enjoyed it.

Le sigh, another prolonged unforeseen absence… I hate it when I just drop off the face of the planet.

Also, the hubby and I are back on a no-caffeine diet, so that means no real tea for a while, except for these lovely decaffeinated bagged teas. Celestial Seasonings has a few, but they aren’t usually carried in the stores, and we’ve found some Twinings and Bigelow decaf here and there. This one I found at good ol’ Wally World (that’s Southern for Walmart… don’t ask). I was so excited to get a decaf chai! I’d missed it so much (we’ve been on this diet for a month now).

Anyway, I steeped it up and added some almond milk and sugar substitute. This particular kind of sugar substitute is called xylitol, and I spring for it because I abhor the aftertaste that stevia and other artificial sweeteners have. This one has no aftertaste, and behaves exactly like sugar, even in baking. :) But I digress. The spices were not overly strong, but they were there, kind of like the kid who sits in the middle of the classroom, and when you get to his name calling roll, gives you a half-hearted wave but says nothing. Anyway, I’ve noticed that decaf black teas have lost a lot of their “oomph” (and by “oomph,” I mean tannins), so you can steep them for much longer without getting that unpolished-copper-astringency. This black tea was no exception, and although I steeped it for way longer than I would a normal chai, the flavor was just lackluster. I’ll drink it, though, because sometimes you just have to have chai, lackluster or no.

Somehow I forgot I’d reviewed this before, so I picked some more up – Mostly because I’m super-sensitive to caffeine when I’m pregnant, but I really crave chai in the fall. Anyway, this was just as lackluster as I remember. I may try throwing it in with a bag of the gold cup chai. That will either be a good combination. Ah well, at least I only picked up 10 bags, and I’m putting together an Herbal and Decaf box right now, so maybe someone else will like this.

I’ve tried a number of Stash’s teas and I’ve been underwhelmed by all except for Raspberry Hibiscus (great as an iced tea).

I don’t like many of their fruity herbals since they all contain licorice root, but I’ve tried almost all of their teas now (their sampler packs are great for that), and there’s about a dozen that I enjoyed. I think my favorites were Cinnamon Apple Chamomile, Decaf Vanilla Chai, Black Forest, and Holiday Chai. I picked up most of these with my last order, so we’ll see if I still feel the same way after ten cups as I did after one.

Perhaps I’ll need to try some more varieties of theirs! From what I remember I’ve tried 6 different fruit herbals for iced tea (and as mentioned, the only one I like is Raspberry Hibiscus) and there was an organic green ginger tea which was only okay. Nothing super gross in the mix; just meh.

I tend to keep some bagged teas around. Stash I mostly like for their flavored teas. Especially since they have more variety in their decaf flavors than most brands. (although I did like the Cinnamon Apple Chamomile and Meyer Lemon). For fruity herbals I tend to go for Celestial Seasonings. If you like Hibiscus, I would recommend trying a few of their zinger teas. I loved The Watermelon Lime and Tangerine Orange were favorites this summer. Their (non-hibistus) Mandarin Orange Spice, and Jammin Lemon Ginger are also quite good. Their black and rooibos teas, as well as anything that uses their apple flavoring are pretty much undrinkable to me, so I don’t recommend those.

I LOVE True Blueberry and Black Cherry from Celestial Seasonings as iced tea. Some of the best iced tea I’ve ever had (and my goodness is it cheap!).

Perhaps I should pick up some decaf green from Stash once my Tetley decaf runs out. Thanks for the recommendations!

I actually have yet to try Black Cherry. It’s generally not one of my favorite flavors. I like True Blueberry quite a bit, even though it tastes more like grape to me.