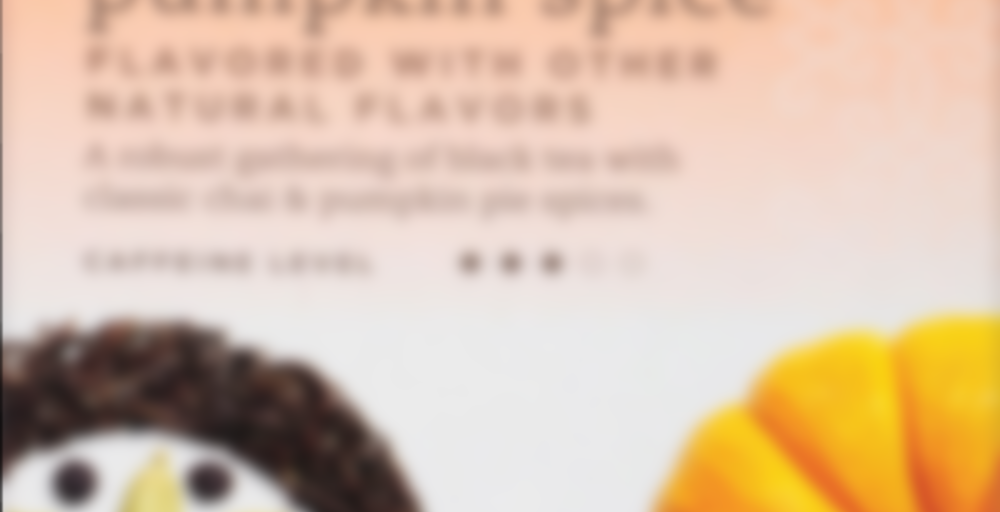 A robust gathering of black tea with classic chai and pumpkin pie spices.

Cinnamon and cardamom sit by a crackling clove fire, knitting elegant black-tea scarves. Ginger waltzes in with a just-baked pumpkin pie, and the room turns aromatic with sweet spice.

Apparently I’m a lone voice in the wilderness here, but I liked this tea. Normally I find most pre-made chai blends not entirely to my liking. But I found this one a well-balanced delight. It does seem to have an essence of pumpkin about it, as another reviewer here noted. It has a nice initial warmth, and the cool aftertaste of licorice, with a nice shunting between the different spices in between. I particularly enjoyed it with a bit of honey. I liked using a bag or two of this when blending a pot of mixed chai blends. I do hope TAZO brings it back this fall so I can enjoy it again! ((ALSO: Please note that the list of flavors under “What flavors and scents do you notice?” was automatically ALPHABETIZED, which is NOT as I originally ordered the flavors. I had put them in order as I tasted them: Pumpkin-Spicy-Cinnamon-Anise. The alphabetized list makes it seem as if anise is the strongest note to me. It was LAST.))

Tastes like a scented candle. The cardamom overpowers all other flavor, no amount of cream or sugar or additional cinnamon could save it for me. The balance seems way off with this one. Can’t taste the pumpkin at all.

I received a bag of this tea in a care package from a friend. I’m guessing it must have been a special edition autumn tea, because I don’t recall ever seeing it in store. When I opened the tea bag, the scent was an appealing blend of pumpkin and cinnamon. But the tea itself tasted like licorice and cinnamon with a slight kick of black pepper in the aftertaste. Not a fan!

I found this on clearance at Kroger for less than $2 because the box was smushed. I’ll try any chai at that price, especially by a well-known brand, so in the basket it went.

The dry bag smells better than the tea tastes. Lightly pumpkiny with the standard chai spices and licorice. However, once it steeps, it acquires a weird, sharp flavor that I can’t put my finger on. It’s like someone let the cloves get dirty or go bad or something. I’m definitely not a fan. Even with milk and sweetener. The saddest part is that the pumpkin flavor in it is actually well done. Most companies screw that up, but not this time. But the spices are just weird.

While it’s not good, it’s not terrible enough to throw out. In order to use it up, I’ve been blending it half and half with Harney & Sons’ Chai, which saves it. The H & S version is spiced and strong enough to make it actually pretty tasty. Like pumpkin pie made by someone more interested in the spices than the actual pumpkin itself.

Tazo might want to rename this one. “Licorice Spice Chai” seems far more appropriate, since that’s the main flavor here. I can smell pumpkin, but that’s about it; everything else is licorice. Even the other spices take a backseat to it. Cloves, ginger, cinnamon, all drowned out by licorice.

Don’t get me wrong; I love licorice. The black jellybeans always go first. However, it’s not really what I’m looking for in a pumpkin spice tea. Probably not going to get this one again.

…in the meantime I have two boxes to work through since it was on sale. /sigh

I am sometimes a mystery to myself? Why, with the tease of spring just around the corner, am I drinking lots of autumnal teas? No idea.
Carry on.

Them tastebuds are living in the past!

The package directions say to mix equal parts of Pumpkin Spice Chai Latte concentrate with milk or any milk substitute. I opted for half and half since that is what I normally make my chai with (plus we’re out of milk again.) After mixing the two together I took a sip and was surprised to find that I didn’t really care for it. It had an odd flavor to it that I couldn’t quite pin-point, it was sharp and somewhat bitter. That was rather surprising considering the amount of sugar in this concentrate. I put it in the fridge and left it overnight thinking I’d give it another try later. When I pulled it out the next morning the flavors had settled, the sharp taste I objected to was gone. All I tasted was an extremely sweet chai, much like what I order at the coffee shop.

You can read the rest of the review on my blog:
http://www.notstarvingyet.com/index/2014/11/4/tuesday-tea-chai-pumpkin-spice-latte-concentrate-tazo-sweeta.html

It sure smells like pumpkin! Taste, not so much. It’s alright. The spices were nice, though!

I bought this not realizing the giant letters announcing that it was a chai. I mean, I expect pumpkin SPICE to be spicy, but just seeing the word chai made me think it would be too intense. As a few people suggested to me, I brewed this in half water and half unsweetened coconut milk. This was the first time I have brewed a tea IN milk instead of just adding it after brewing.

First of all, oh my goodness. The smell is exactly pumpkin pie (not just pumpkin….crust…cinnamon…even whipped cream!) using this method. The taste….I’m not sold. I think I will try this with unsweetened vanilla almond milk next time because the coconut flavor either overpowered the pumpkin flavor or there was simply none to be found. That’s not to say that it wasn’t good, and the amount of spice was tolerable. I just wouldn’t think of this if I was craving pumpkin. I’d think of it on a cold night.

Am I really expecting too much when wishing for actual pumpkin flavor in a pumpkin spice tea?

I picked this up on a whim at Target last week because the temperature went from 90 degrees to 45 degrees in the span of two days and I wanted something fall-ish and comforting.

You can definitely taste the chai spices with a hint of pumpkin at first sip, but I’ve found the aftertaste is mostly licorice.

Overall, for a bagged tea, it’s pretty darn good, but DavidsTea pumpkin chai still has my heart. I might grab another pack when I run out to store at work just for the convenience factor.