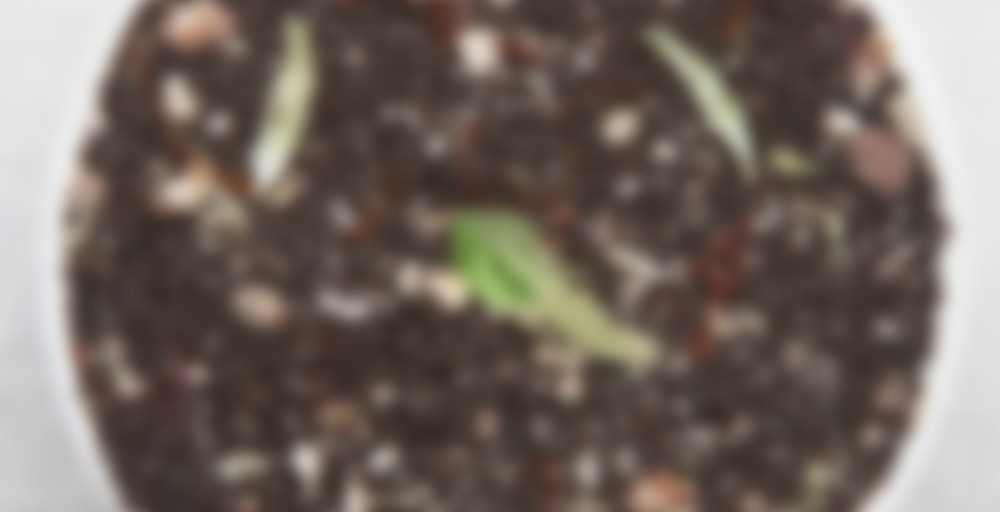 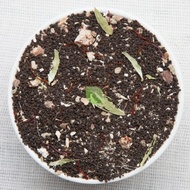 This particular blend has been created using rich Assam tea and exotic Indian spices, including saffron, cardamom, nutmeg and ginger to make an extraordinary cup of chai. The flavor is virile and aroma heady. Savor a cup of this tea inspired by the city of joy – Kolkata.

Cuppa Tea With Me 82

Before I begin digging into this chai, allow me to state that, for the record, I have never been the hugest fan of chai blends. I used to actively hate the stuff, but an Indian restaurant in my hometown and exposure to a few solid blends changed that last year. I’m still not the hugest fan, however, and it is not something I aspire to drink often. I guess I’m still trying to find that one blend that gets everything right for me. Unfortunately, this one was not it.

I prepared this tea in the Western style. I steeped 3 grams of this chai blend in approximately 8 ounces of 194 F water for 5 minutes. I attempted no additional infusions. I first tried the infused liquor neat and then with additions of milk and honey.

Prior to infusion, this blend emitted strong aromas of malt, cardamom, ginger, and saffron underscored by touches of nutmeg. The infused liquor displayed all of the above plus touches of wood, brown toast, caramel, and molasses. In the mouth, this blend was biting, astringent, and quick to turn bitter. Notes of malt, cream, brown toast, wood, roasted walnut, caramel, and molasses from the CTC Assam base gave way to strident notes of cardamom, ginger, and saffron underscored by a somewhat gentler nutmeg presence. The finish was similarly biting and astringent with lingering maltiness, nuttiness, and touches of molasses balancing a more integrated spice attack. Typical of chai blends, this was definitely not meant for drinking neat.

With milk, this blend was a rather different beast. The astringency was tamed. Cream, malt, caramel, and roasted walnut rose to the fore while the saffron somewhat faded to offer a greater opportunity for the nutmeg, ginger, and cardamom to shine. I generally take my chai with milk and a touch of honey, but this was not bad with only milk. Still, I felt like the spice aromas and flavors were a little too toned down (to be clear, it was not like I added a ton of milk) and that the blend had lost a little too much of its previously ferocious bite.

With both milk and a touch of honey, I felt that this blend lost all focus. It became a bit too sweet, the saffron and ginger once again popped just a little too much, and the finish turned muddy. Of the three preparations, this one was perhaps my least favorite.

In the end, I was not really sure about this chai. No matter how much I played around with it, I could not quite get it to where I wanted it to be. To be fair though, it was a pretty simplistic blend, so I’m not surprised that it was hard for me to dial it in with additives. Perhaps an additional spice or two would have allowed for the retention of greater depth and complexity once additives came into play. I think cinnamon, black pepper, and/or bay leaf could have worked wonders in this blend. As it stands, I’m glad I tried this chai, but I doubt I would order it again.

I received a sample of this from DonkeyTiera. Thank you.

Wow this is a serious chai. No joking around with this brew. If this doesn’t get you going in the morning I am not sure what would. This is like mud. Holy cow that was a brew. It was a good chai, but I think it might be a tad strong in the tea department for me. I would have liked a ligher brew with more on the spice front. Thank you for sharing this one. I always love trying different chai!

My officemate came to work all week with a cold that she insisted she had over the holidays and couldn’t be contagious at this point in time. So, of course, here I sit on a Saturday morning, snorking, snuffling, hacking and wishing the world would turn down it’s volume because my head is in a pressure cooker. What tea? What tea? I need AROMATICS!! Do I have any? Oh! A Sample of chai! I know I have one somewhere….where???? Ah. Found it.

I drank a lot of bad chai in the 1990s. Really bad chai, usually made from powdered mix and made “better” (ha!) by my adding Coffee Mate French Vanilla Creamer. I have been “done” with Chai since that time, as none have been able to erase that memory of my first chai experience. But this one has piqued my interest.

My biggest issue with chai is the amount of cinnamon that most blends use. If “just the right amount” for most folks is used, I find it overpowering and a bit bitter. Kolkata Street Chai removes the cinnamon from the chai equation for me, leaving just 3 aromatic spices to create an alt chai flavor profile. When I opened the packet, the blend of cardamom, nutmeg and saffron were almost intoxicating….heady and compelling… to the point where it felt like the longest 4 minutes of my life, steeping this tea. The CTC used is strong but not bitter when steeped at 4 minutes, and supports milk and honey well….so well, in fact, that I burned my mouth via lack of impulse control. I can be such a greedy greedy tea child, especially when I’m feeling ill.

Teabox has created a intriguing alternative to typical masala chai in their Kolkata Street Chai. I will purchase this tea. I will learn to drink it slowly so that I don’t have a numb spot on my tongue where I have burned my tongue. I will learn to savor the aromatic spiced tea instead of gulping it down, lost in the pure childlike joy in my mouth. ……maybe…..

Oh, I need to dig this one out.