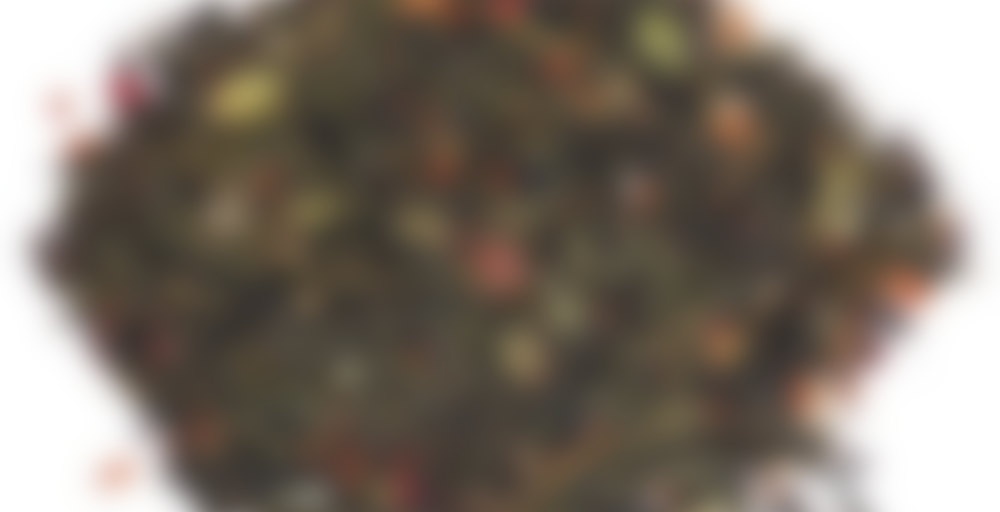 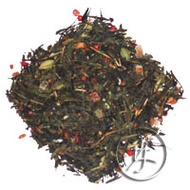 This is one of the teas that I selected in the sampler that was featured in the Steepster Select back in May.

I can taste the genmaicha right away. Since genmaicha is one of my favorite green varieties, that’s a good thing! It’s quite fruity, but there is a little bit of warmth to it too. I’m really liking this one a lot!

This is one that I’m definitely considering placing an order for a full-sized package!

You had me until I saw genmaicha. The name of the tea is so awesome that I might just have to cave!

If this were called “Bamboo Shoots…Bamboo Scores!” then I’d totally cave ;)

@Rabs – you are onto something there… and that fits so well with the fact that we are CANADIAN! ;) (naturally I went to hockey with that :)) There may well be a name change in the near future for this one!

Sipdown no. 16 for 2014. Another sample in the “to be drunk soon” box that I didn’t get to during my last tea tasting frenzy.

The dry leaf has so many interesting shapes and colors in it. ;-) The red peppercorns are really pretty. They look like miniature holly berries against the green of the tea. I can see little squares of what must be the papaya or the pineapple (probably papaya because of the color). And the little cardamom pods! The dry leaf has a mostly sweet scent to it with just a hint of spice.

The liquor is golden and smells very fruity. I get a lot of pineapple in the aroma.

I’ve had some bad experiences with flavored greens, but not so here! Very tasty and not at all bitter. Not as toasty-ricey as I expected, though there’s a hint around the edges, and I’m not getting the spice I thought I’d get with the pepper and cardamom (though there’s a peppery kick to the aftertaste that’s playing with the tip of my tongue). I get mostly pineapple, as a gentle fruity flavor. As I was sipping I wondered where the bamboo was, but I’m getting it, a long with the toasty rice, in the finish. I should perhaps have steeped this a bit longer. I also suspect that with teas like this with all the various ingredients a lot depends on the individual makeup of your sample. I’d drink it again, though I don’t love it enough to buy it.

And now I really must detach myself from the internet and go write something. Alas, I fear I will not be successful.

ETA: The fruity tea lover in the house, the BF, had one word for this.
“Aces.” I’m bumping the rating because he’s more of the target audience than I am. I’d give it a 75. He’d give it, I’m sure, at least a 90. So I’m putting it at 85. I also have to revise my prediction as to whether I would buy this, because he’s already asking if there’s more!

The first thing I could smell with the dry leaves was a sugary type smell. Once infusing began I could smell the Genmaicha and after the infusion was complete there was a funky smell – almost like sour??? What the!?

“E” for Effort on this one. It’s not my fave but it’s not bad either. My rating may go up when I try it again but for now I’ll go low to mid 70s…that sour-type smell is freaking me out…thank the tea gods it doesn’t taste that way! LOL

I didn’t get that at all. It was good cooled (just left in my cup not refrigerated or anything), there was a bit of astringency in the last sip- just enough to make the back half of my tongue curl up at the sides just a bit. But was definitely not anywhere near a bad thing.

I’m finishing up my sample of this but unfortunately am not getting the Kettle Corn type flavor that I did last time. This why I sometimes dislike blends, the flavor is very much dependent on the particular mix you get in your infuser. I guess this time I got more fruit and less genmaicha because it just tastes like a nice fruity green tea. Perhaps I would like it more if I had started my day with a black tea instead of this. Why did I start with a green? I never do that.

The red peppercorns add an interesting zing to the flavor of this tea. I wish the pineapple and coconut were a little more to the fore, but overall, this is an interesting genmaicha. I can see how others came to the idea of carmel corn. I think the smell of the tea is definitely reminicent of caramel corn, but the flavor didn’t have that for me.

I chose this as one of my free samples when I ordered the “Steepster Select” stainless travel mug from Tea Frog. I am not very well-versed when it comes to green teas, and this might only be the second flavoured green tea I’ve tried. Overall, it’s very pleasant… I was worried that it might be sweet but other than the teeny bit the fruit pieces and coconut add, it’s not really.

I didn’t use a huge, heaping teaspoon so I steeped it a bit longer than I normally would a green tea (about 4-5 min, but I wasn’t watching the clock closely). The colour is very light, a yellowish-green, and the scent is also light—slightly fruity with a hint of something tropical. The flavour is subtle… nothing jumps out at me, note-wise, and thankfully I don’t get anything artificial from this blend. I’m very grateful that I can’t tell there’s ginger in here, and I don’t get any cardamom either. It’s a very pleasant green blend with a little something extra. Nice, but I don’t think it’s a must-have for me when the sample runs out.

I love bamboo shoots! I’m gonna order this as soon as I can and look for other bamboo flavored teas.

Not really sure about this one. I tried this hoping there would be an explosion of flavor. With so many flavors included I thought it would be a spicy, earthy, slighty fruity blend. Instead what I tasted was unrecognizable. No one flavor popped out. Nevertheless, it was drinkable just don’t plan on ordering more once my sample is done. Keep in mind I am not a huge flavored green tea fan but I thought heck let me try it, it is a sample after all and a great deal.

Ok. I admit it. I blindly put this on my shopping list as soon as I saw “bamboo”. It wasn’t til after it arrived I even noticed it has gen mai in it. AH CRAP! But even that aside, this is a weird combo: chai like spices and fruit?

Hmm… The light greenish yellow liquor definitely smells very faintly of the gen mai that gives it it’s cloudyness and a hint of spice. But it’s mostly a fruity green tea aroma.

Ok, this is the ONLY gen mai cha that I will ever like. I’m not actually gagging- yay! The gen mai is the lightest of the flavors followed by the spices (unfortately mostly peppercorn), and most strongly the fruit and green tea. I have no clue what bamboo would taste like in a tea so I can’t tell you if it’s here or not. Don’t get me wrong, this is actually a pretty impressive and shockinly amazing tea (an 85ish on my personal preference scale), but there’s just too much other schtuff here for it to be called a bamboo shoots tea.

Citrusy, sweet, spicy, tangy and toasty all at once. Reminds me of Thai food—with all its melange of flavors.

Roasted cardamom and pineapple upon cooldown.

Really yummy…and strangely comforting and refreshing at the same time.

I don’t often use the word “chimera” outside of my sci-fi reading/writing…but this? What the heck?! Just look at the ingredients. If you think those seem diametrically opposed to one another, wait ‘til you smell and/or taste it. As for the aroma: There’s a tug-o’-war at work here, like it wants to be a tropical “genmai” chai. And – to whatever end – it kinda succeeds. On the flavor front? I know I liked it. I know I liked it a LOT. Describing it is another matter. The fruits dominate, spice and toastiness make their mark somewhat, and I still don’t know what bamboo tastes like.