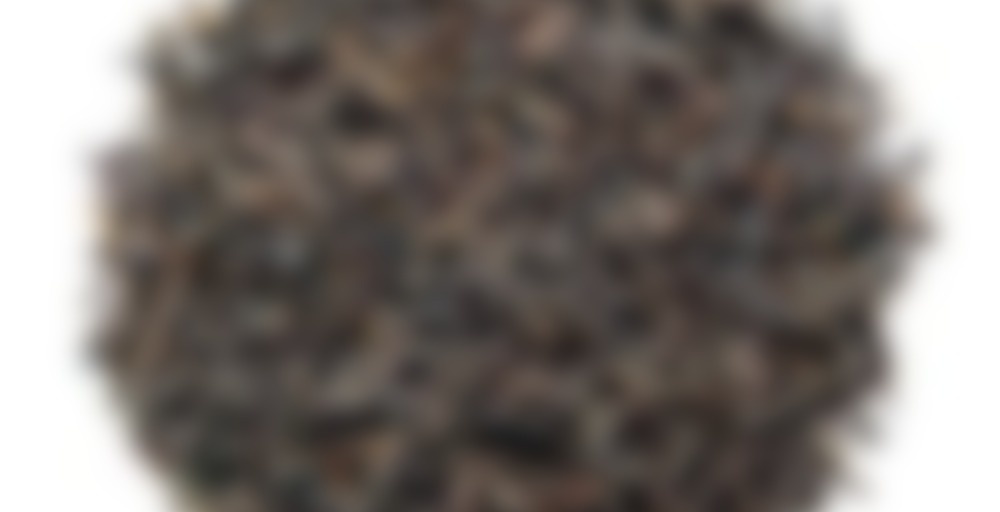 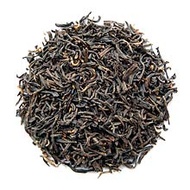 Tan Yang black tea was first introduced in 1851 and it was mainly exported to European countries. This is one of Fu Jian province’s three famous Gongfu teas (the two others are Zheng He and Bai Lin). It was named after the place of its origin – Tan Yang Village, and has won several awards over the years such as:

In addition, Tan Yang black tea was selected by Diao Yu Tai State Guesthouse as China’s Gift Tea for international VIPs in political and economic fields in October 2005, and again in 2008 by the Beijing Olympic Economic Research Association.

Taste:
The fragrance of the dried leaves is quite reminiscent of smoked bacon but once infused, the tea has a nice and strong rose-like floral sweetness which gradually strengthens after a few sips.

Oh my goodness! I’m getting quite a bit of rose on the mid to end of these sips. Rich, grainy, roasty, chocolatey… then rose. Musky earthy true rose, too. I’m in love. If I could put my best loved flavors together and wish for a tea, this would be IT! Fancy that it also has a rich history, winning awards all the way back in 1915 and everything! Millions of hearts to this one.

I love a really good Panyang Congou! Did you resteep the leaves at all?

I’m on my second steep presently. It’s sweeter than the first, but remarkably similar in character. Mmmmmm! I will most likely do one more, then let my leaves sit in cool water til the afternoon for a rag tag “iced tea” :)

I do. I only bought the 50g size this time around, but I’m going to reorder a bigger one. Angrboda would disagree with me, though :)

Have you tried any other Congou teas from TeaSpring?

They have some great looking black teas there!

Scott – just their Tan Yang Te Ji which is the rough and tumble version of the above. It’s very delicious but I didn’t taste any rose in that one. I taste more of a gong fu black esque taste. Chocolatey and toasty.

Amy, I really like their quality, sometime in the future I’ll order again.

One of the Congou’s I tried from Upton’s had berry nuances.

Scott – I’ve had pastry flavors from an Upton one but never berry. That sounds goooood.

Gosh, a third completely different experience with this one. What is this, chameleon tea? :D

Yes, I absolutely agree that I disagree with JacquelineM above. :D I find the Jing Zhi far too … polished is a good word. Polished. Yes. The Te Ji has more spirit and is a little more rough around the edges. I like that. It adds some wildness which I find more interesting. :)
I’ve noticed that I’m the same way about Keemuns. I tend to prefer the lower leaf grades because they’re more smoky in character rather than floral. I think it has to do with me not really being a fan of those floral aspects at all and it seems that the higher the grade, the more likely they are to be there.

I thought the Jing Zhi was fun to try and I did very much enjoy it when I did, but I prefer the Te Ji out of the two.

Scott and Amy, definitely look into TeaSpring. They offer some really nice things and it all seems to be of a good quality. It is somewhat expensive, most of it, but shipping is so low it barely matters. :) I never have trouble getting my order up to the point where I get free shipping. I have more trouble controlling myself once I reach that point. :D Of course half of that amount is usually taken up by stocking up on as much Te Ji as I can get away with. I have promised myself to explore other parts of China next time though. There is a Sichuan one in particular that I have my eye on, but I can’t remember the name of it right now.

Angrboda, I can relate. Since I began exploring Ceylons last summer, I have realized that I prefer the “low-grown” ones to the high-grown Ceylons that connoisseurs seem to go for. And I even prefer the lower grade of Kenilworth (just OP) to the slightly higher grade (OP1). I am a woman of simple tastes.:)

It’s so practical though, because it’s much cheaper for us than it is for them. :D

Let it be known that Tan Yang black is just about the closest thing to perfection I’ve ever met in Tea-Land. It’s interesting and complex and it has both smokyness and a strong cocoa and raisin note to it. Anything you like in a chinese black, the Tan Yang has it.

It’s no secret that I have a torrid love affair with TeaSprings Tan Yang Te Ji. For the longest time, however, that was sold out but they still had the Tan Yang Jing Zhi in stock. A higher leaf grade and a MUCH more expensive tea. Expensive enough that it’s certainly not one that I would just go ahead and buy large amounts of. Money don’t grow on trees where I come from.

So when the Te Ji finally came back in stock I went ahead and bought a larger supply and a small amount of the Jing Zhi for experimentation and comparison purpose. If the Te Ji is such a piece of perfection, how awesome could not the more refined version be?

25g. Half of it I sent off to Auggy as she is also a lover of the Tan Yang (I don’t mind taking the blame for that) and I wanted her to have the opportunity to experiment and compare as well. It’s always nice with a second opinion. The other half was carefully packed down again and has been lying around for a while. I wanted plenty of time to try it in and I was also afraid of messing the brewing up, what with having so little of it and it being priced the way it was.

But today is the day. I’m doing a side by side comparison, so I’ve just made two cups of tea in my little farm animals favourite pot. One Te Ji (in the sheep cup) and one Jing Zhi (in the kitty cup). I’ve been careful to brew them exactly the same way. Same amount of leaf, same temperature, same time. Even same shape cup (but that’s more because the size fits the pot perfectly). I made the Jing Zhi last so I can resteep the leaves and the get the most out of them.

Rather than making two identical posts, I’m posting the whole thing in this one, since it’s a comparison of two very similar teas and I’m primarily wanting to see how the Jing Zhi is in comparison to the far more well-known Te Ji.

In the following, all notes pertaining to Te Ji will be in italics.

There seems to be more aroma. It’s more or less the same notes, sweet, slightly wooden, slightly smoky and rather raisin-y. Weirdly I’m not finding much cocoa in either of them this morning. That’s odd because the first time I had Te Ji it had very strong cocoa notes to it and I would have expected the Jing Zhi to be the same. Maybe the first time around was a better year for cocoa-notes. Or something.
Stronger, fuller aroma in Jing Zhi, but the same notes.

There is still a lot of cocoa in the flavour, especially on the swallow, but mostly it’s a sweetly oaky sort of flavour. A bit spicy, and not very smoky, but the smoke generally don’t really come to its right until the second steep
This seems stronger. A little more astringent, a little closer to a pang of bitterness. It doesn’t seem to have the same immediate charm, and I’m reminded of how the Te Ji wasn’t really that special the first time, but grew on me with remarkable speed. There is definitely smoke present here, as well as an oaky note. It’s not as sweet though. Te Ji appears to have an ever so slightly honeyed note. It’s very very little and only there if you really search for it, but I can’t find that in Jing Zhi at all, how ever much I search. The more fruity notes of raisins are more well developed here though than in Te Ji.
The Jing Zhi seems a little rougher, a little sharper around the edges. I prefer the Te Ji here.

All in all, the Jing Zhi is very awesomely good. Like the Te Ji it’s just a whisker away from perfection. In some ways, yes, I think it is a little bit better than Te Ji, but it’s no way near so much better that I’m willing to pay that amount of money for it. The Te Ji wins on price by several horse lengths. If and when I become a multi-billionaire, I might switch to Jing Zhi just for the snobbery of it, but in the meantime Te Ji is totally still pressing all the same buttons.

Can’t wait to try this one! I did bring this and the Te Ji with me to Hawaii, but since the apartment ended up not even having something approximating an appropriate tea-like mug, I wasn’t brave enough to brew it (didn’t want to mess up my chance at Tan Yang perfection, you know).

Yes, I was feeling the same way about it. It took ages for me to try it because I was SO scared I’d mess it up. The experience of TWO mugs of tan yang sitting right under your nose, though… Gosh! It was difficult to write the post. Kept getting distracted. :D

I’ve been saving this sample from Angrboda for a time that I could sit down and really enjoy it. I have decided that today will be that day.

The dry leaves smell like a smooth, cocoa-y Keemun. Post-steeping, however, it smells Keemun-smoky and toasty. But it also has a sour but perfume-y note that reminds me of used cat litter. Uhm, not cool. Thankfully, when it cools a bit that smell totally goes away, turning into a floral yet toasty note.

The taste is just like it smells –sweet and toasty. It’s really sweet in a floral way, like candied roses. There’s a toasted grain note underneath the sweetness but the sweetness is the dominate note.

Honestly, this is obviously a good tea – is so smooth and sweet – but I kind of miss the more rough and tumble MPD-ness of the Te Ji. I’m leaving this unrated for now because I think the rating I’d give it would be biased since I’m a little sad at how smooth and soft it is. But I think if I have this when I’m looking for and expecting tasty smoothness, I’ll be all sorts of in love with it.

ETA: The second steep (1:15) was very Keemun-y and tasty. The third steep (2:00) was more Yunnan-y. So maybe this tea is MPD, too. It just changes personalities each steep, not each sip.
2g/5oz

I agree, this one seemed more straight forward somehow. I was expecting major difference, and just got something sort like the Te Ji Light, or something.

Exactly! But yes, this is Te Ji’s nicer cousin and I was expecting the same Te Ji taste but smoother and fuller. Still a good tea though, just not what I was expecting!