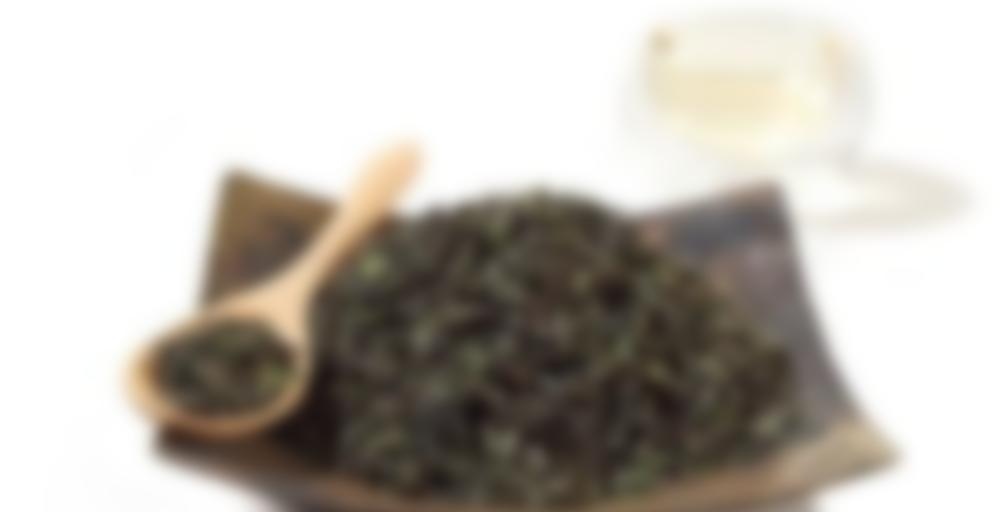 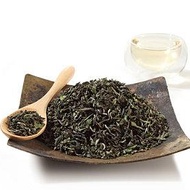 Glasses lifted high in moments of celebratory triomphe- the inspiration for this most coveted ‘champagne of teas.’ Refreshingly young black tea leaves, featuring vibrant gradients of green colors yield a high content of silvery tips and buds. Each and every single leaf is scrutinized for purity in taste and features a harvest of the first flush of leaves from six of our bountiful private reserve tea gardens. Taste a floral aromatic sweet ending with each sip of this victorious creme de la creme of Darjeelings. SFTGFOP-1

Muppetlove sent me some of this! Thanks a bunch! This is the mellowest darjeeling I have ever tried! Eventho it’s still considered a black this would be one I would drink prior to falling a sleep because it’s so mellow and relaxing. It doesn’t have a lot of punch but it’s fairly tasty. It just won’t give you that kick in the pants you might need bright and early in the morn’

Not too shabby – end page.

Picked this up during their 75% off sale, but hadn’t been inspired to try it until this morning (continuing a theme). The only other darjeeling that I’ve tried is from Adagio, and I liked that one (Darj. Sungma Summer #22), so I have at least one other experience to compare this with.

Brewed at the low end of their recommendation, my first sip impression is that this seems more like a green tea, or at least a combination of black/green. Very pleasant taste. Having added my usual T. of honey, there is a sweetness to this that meshes well and has me thinking that I need to do a side by side testing with the Adagio one (will rate the same for now).

I’m not sure I’d spend the regular price of $20 for 2 oz. for this, but am pleasantly surprised that I’m enjoying this cup of tea this morning. This is a SFTGFOP-1 … anyone have any experience with Darjeelings from Upton to give a recommendation? (did anyone see that Upton added a Wishlist function this past week? Yay!).

I want to go on a Darjeeling ordering spree from Upton sometime soon lol..that of course doesn’t help right now. I do have a couple from another company and I see Upton has a Castleton like I have, and it’s my absolute favorite. Theirs is a second flush.
I am now going to make use of that wishlist.

Thanks for the suggestion (Castleton). I really need to show some restraint, and drink down some of what I have, which is why that wishlist feature was extra appealing (rather than having stuff sitting in the cart, tempting me each time I went there, lol). Will be on the lookout for your Upton reviews : )

Just ordered eight different samples to try out :D I’ve been wanting to order from them for a long time now, and my sudden obsession with Darjeeling seemed like a good push.

They will ship out tomorrow (USPS) … Upton is super fast. Hope you find some winners : )

Sipdown! My final cup of this turned out really bitter. Oh well. All gone now!

Date of Purchase/Age of Leaf/Amount of Leaf/Date of Steeping/Frequency Drank: I bought this in December of 2011, the year of harvest is not provided, I bought two ounces of it, and I have had it twice so far.

Appearance and Aroma of dry leaf: Very green-looking, but otherwise looks and smells about like any other Darjeeling.

Color and Aroma of tea liquor: Clear, such that it was caramel colored on top where the leaves were, and a light green on the bottom (on the first steeping, at least); smelled fresh and like another quality Darjeeling I have had; when decanted, there was a very thin froth (?) on top of most of the liquor (clusters of tiny little bubbles).

Flavor of tea liquor: Standard fruity complex tea with the characteristic muscatel notes; my wife detected some bitterness on the finishing taste of the second steeping; it did taste good at room temperature; it had flavor up to the third steeping, but not much; still, that’s about what I expect out of a Darjeeling: at least two good steepings.

Appearance and Aroma of wet leaf: Very green—much like a green tea—with a few brown leaves here and there, and it had an odd smell: malty, and almost musty (one of those smells that makes you want to wrinkle your nose in dislike of the aroma); the number of stems was surprising, as was the number of little bits; the leaves were more chopped than other Darjeelings I have seen.

Overall: In the four Dareelings I have had so far, this one is clearly fresh and has good flavor. Having had a H&S SF Darjeeling just days ago, it’s easy for me to say that the H&S SF was much better. Comparing the taste of first flush (FF) with a second flush (SF) Darjeeling may be like comparing apples to oranges, but there’s more to my comparison than simply taste. With the H&S SF the aroma of leaf was much more complex, the flavor was brighter and slightly fresher, and the leaf was from a higher quality pluck (the low quality pluck of Teavana’s teas seems to be a trend; at least that’s what I have noticed looking at the leaf of probably over fifty different loose leaf teas—not counting the flavor-added varieties). I’m glad I tried this one, and I may be willing to buy in at 75% off again, but otherwise there are other better Darjeelings out there for their regular price.

When preparing tea for the day today, I figured I’d give this another try. Unfortunately, I enjoyed it a little less this time than the first… The dry leaves smell pleasant and green. But the wet leaves were almost more like wet socks (not necessarily gym socks, but socks nonetheless). The first sip reminded me too much of the wet leaves. After that, it was a little nicer, but I still probably won’t be drinking this much. I think I’ll give it another go after a little while to see if my opinion of it changes.

Earthy and astringent Darjeeling, with lots of green leaf in with the black. Crisp, with lots of muscat. Feels and tastes like a lot of second flush is in here, which suits me fine. It does tend towards being bitter; I think next time I’ll use cooler water. (Teavana recommends 90C.) I got this as a gift; I haveno idea how much it costs; if it’s reasonable, I’d order it to keep on hand.

The coldness of the himalayan winds just blew away any sort of the darjeeling taste I was expecting…on the flip-sides it was honestly triumphant of floral, nutty, and some winey-ness about the drink. I certainly would share it with my friends and make good iced tea with it which was quite refreshing to the generic black teas usually prepared with iced teas. I say the most versitle of all darjeeling blends but don’t bother getting another brew the second time around to astrigent and mute.

This tea doesn’t seem like a black tea. I steeped it a WHILE and the tea color was barely brown. I don’t really love the flavor… it seems kind of oaty. The flavor is a bit floral. But I can’t really describe the flavor otherwise. Also, the tea leaves themselves didn’t seem too consistent. I’m not sure, but if it is one type of tea, shouldn’t the leaves all look the same? Another disappointing tea from Teavana. I’d rather order from less expensive, better quality tea companies in the future. Even on sale I don’t think I’d buy this again.

All darjeelings are like that…. while they’re called black teas they don’t get dark, especially if they’re first flush teas.

I haven’t had much experience with dareelings, so I wasn’t sure. thanks for letting me know!

It’s a very light, clear black tea. The color is that of an orangey-gold, a little darker than that of a green tea. It smells crisp and floral. Upon a first steep, the floral tones present in the smell come out. It’s not a strong black tea. It has about the body of a green tea with the earthiness of a black – there isn’t a lot of natural sweetness to it. But it works. I’m not sure I would pay the $10/oz, but since I picked up about 6oz at 75% off, I’m certainly going to enjoy what I have. It’s nice that this tea can be steeped several times, and is good when blended – I’ve tried it steeped up to five times, and my favorite blend is this Darjeeling on a second steep with about a teaspoon of Dragonwell green tea added.

I like this tea better iced than hot. When hot it does taste rather…wet, but when iced, the musky floral end is extremely clear. Very earthy smell when dry. I do have a rather…erm, surplus of this due to the sale…