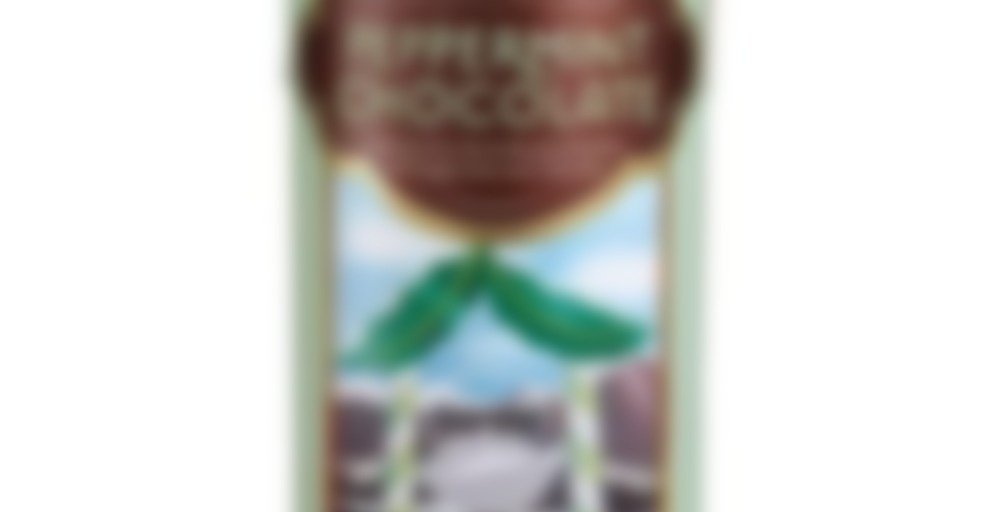 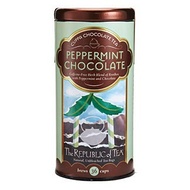 by The Republic of Tea
68
You

with 32 Ratings Rate this tea Rate This Tea

This cuppa is your gateway to guilt-free indulgence. A joyous chorus of creamy, cool peppermint, rich chocolate and smooth, caffeine-free rooibos will make you sing throughout the day. Relish in the calorie-free, healthful pleasure.

Chocolate. Well, chocolate ish.
I have plenty of chocolate tea left, but I’m going to probably stop buying anymore chocolate flavors, mostly. I find that they’re almost always disapointing, with a couple of exceptions (hello read my lips).
But as I say, its going to take a while to sip all of this down.

I feel the same way about chocolate teas.

The last bag! I really enjoyed this tisane — as long as you used the specified bag per 6 oz of water, you got a chocolatey, minty, creamy delight that is very nice in the evening. That being said, I don’t think I’m going to repurchase. My local tea store has a rooibos concoction which contains mint, chocolate, and vanilla which I’m curious to try.

This was in the Travelling Tea box and I believe it came from CupofTree. I’ve heard of these chocolate blends and I’m excited to try them (I have another sample I need to get to as well)

This was VERY minty and had a nice chocolate smell. I do agree with the other that the mint comes through more than the chocolate. Knowing how RoT is, I made sure to not use too much water since the bags are small. This is a nice herbal blend, and I would highly recommend this for anyone who loves mint.

I just let this steep forever and ever in the mug so it got pretty strong.

I also just realized this is a rooibos blend, so I have to give RoT points because I didn’t even taste the rooibos (which is usually pretty strong).

I believe it was CupOfTree who sent this to me! Thanks so much!

I have found with Republic of Tea’s flavored bags – especially rooibos flavored – double bagging it seems to do the trick. So that’s just what I did here…

It smells extremely chocolaty that is for sure! The taste is more peppermint than chocolate but I can still taste that nice sweet chocolate in addition to the peppermint but it’s secondary. I’m totally ok with that as I am a mint freak! Chocolate Mint? Even better!

This is yummy…fresh and refreshing! Sweet chocolaty and minty! A treat, indeed!

I am having a terrible day and I just needed something nice and easy that I knew I would like. This just hit the spot.

:( I hope it improved for you!

Oh my god… this one is GOOD. Good good good. I haven’t been surprised by a cup of tea in a while, but I’m adoring this one. (Jim, if you read this we must bring a tin of this for your mother at Christmas. She feels as I do about peppermint-cocoa rooibos.)
Ahem.

There was a tea that I found in Chicago that came in a Cocomint flavor- I think the brand was Khalihari, or somesuch? Anyway, they only carried it in the Chicago South Loop Whole Foods, and I haven’t seen it since. This is a really good match for it, and might actually even be better. The mint and coco remind me of a less sweet mint-hot chocolate, and of course this lacks both the caffeine and the calories.

The girl at my Whole Foods counter insisted that I try this one on the house, and she was so right about me liking it. It really has all of the flavor of a cup of mint hot cocoa drink but just less sweet in a really good way- less overwhelmingly sweet that is.

Er, as I was typing this a UPS truck went flying down my street… backwards.

Boiling 5 min, 0 sec
Yours I Like This
8 likes
4 comments
Edit

I think you have to elaborate on the UPS truck!

This sounds really yummy – must keep my eyes peeled at Wegman’s and Whole Foods!

You know, I thiiiiiink the UPS truck must have passed the place it needed to drop off a package and concluded the best thing to do would be to reverse the truck down the street at top speed…er… yeah.

My hubby does that, it freaks the neighbors out, but in his defense he backs tractor trailers for a living! Oh and I really need to try this tea! :)

I think I’m getting more into pepperminty teas this year. Winter normally makes me think of peppermint mochas, but as peppermint is always included in holiday/Christmas blends, I am usually forced to try a minty one despite it not being my favorite flavor. Instead of wishing for more creamy, egg-noggy Christmas flavored teas, I’ve decided to just embrace the peppermint and force myself to drink it down! It happens sometimes that I’m pleasantly surprised.

Giving this tea a sniff, I smell mostly rooibos and peppermint, no chocolate. I’m a little worried because it seems like it’s not going to be creamy chocolate. Sipping… the rooibos is definitely detectable and is rather strong. I don’t mind this because I like rooibos, but for those who do not like it, I would avoid this blend. The peppermint is also a bit strong. It’s not like it clears out your nose and mouth, but it does taste toothpasty. I don’t get any chocolate which is a bit disappointing because I think it would make a nice addition to the cup. The aftertaste is also a little sour and strange. For the most part, I enjoy the RoT’s “Cuppa Chocolate” teas, but this one is not for me.

I got this as a sample with The Republic of Tea’s catalog. I usually don’t like rooibos teas, but this one was nice. Maybe I wrote off rooibos teas too soon? Anyway, I much, much prefer Verdant’s Chocolate Chamomile Curiosity Brew if I wanted a minty chocolate tea, but this one would due fine if I didn’t want the caffeine.

I got a sample of this tea just yesterday with the Republic of Tea catalogue. Usually, I let the Rep. of Tea samples sit around along time before possible sampling them, but usually I get rid of them. I’ve only ever had one teabag from them that was halfway decent.

But I’ve been feeling experimental lately, and brewed this one up last night.

It’s junior-mint-like, if you imagine what such a mint would taste like having sat under the sofa cushion for a month, squished and blended with other unidentifiable crumbs, possibly some bug guts. . . It certainly smells awful enough. I think it’s the rooibos adding a sort of rotten quality to it. The flavor almost has redeemable qualities, but not enough to make it drinkable. The mint releases a burst of extra minuteness on the way down that makes me think that it’s going to cover up the bad flavors, but it falls short of the goal. The chocolate, if I could pick it out from the rooibos and mint, almost seems authentic. . .almost, but still in a cheap-chocolate kind of way as is common for chocolate teas.

All in all, not a good cup of tea. I did not finish the cup.

For me, RoT is like samples that work the opposite way they probably want them to. :/

I really like this tea. The chocolate has a nice cocao flavor and the peppermint is not too strong. And it makes you feel like you’re getting a treat without all the calories of a heavy dessert!