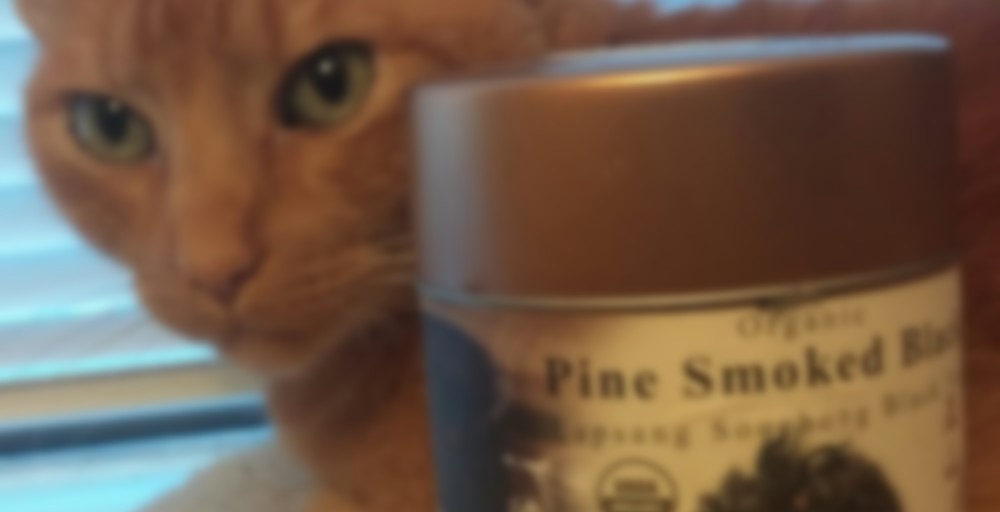 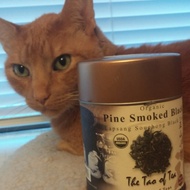 Famous Lapsang Souchong (Pine Smoked Black) originates from Mount Wuyi (on the northern border of Fujian province with Jiangxi province, China). In 1999, Mount Wuyi entered UNESCO’s list of World Heritage Sites, both natural and cultural. It is a well known biodiversity conservation zone of Southeast China. In making Lapsang Souchong, the leaves are withered, pan-fired, rolled and oxidized before being fully dried in bamboo baskets over burning pine. the result is a very smoky, but smooth, enjoyable flavor. Compliments well with sweet and spicy foods.

I’m not sure if this is the same “Tao of Tea” as I noticed there were two in the library…
Either way, I only have a sample of this, and I think it will stay that way! The Lapsang I tried at Teaopia remains my favourite.
This one, it was good, for the most part. I think. I’d have to play around with it before declaring it unworthy, and only in comparison. I did quite enjoy the flavour, which is the main point of a tea in my books, thus giving this one it’s relatively high rating despite all my moaning about it.
But there is something missing. The other ones I’ve tried have a depth and smoother base.
Also, I used this as a marinade for my roast pork. Not being a fan of roast anything, it was just ok… (stringy meat? no thanks!) but my parents love it so that’s what we had in the house *sighs
Next time, I’ll make it into a gravy.

I loved this Lapsang. It has “notes” of lava-burned chocolate.

Hmmm, I didn’t get that at all! but then the shop owner told me that his shop is the only location… so maybe it is an independent.

I have yet to try Lapsang Souchong, but I am looking to try some one day. I had seem some at two stores I visited and missed on buying them; I opted for something else; always making the wrong choice.

At least I know where to acquire them.

Seule: It’s a unique tea, to be sure. I can send you a sample if you like but the one I have is not the best to go by…

Geoffrey sent me a bit of this LS. I’ve fallen in love with these smoked teas. They remind me of fall where I grew up, smelling the burning of the leaves and the smoke from wood and coal fires. I get these great nostalgic moments whenever I drink them, of being small and being at my great-aunt’s house, curled in a blanket on her screen porch.

I don’t think I like this one as much as Art of Tea’s, but I did only brew this for 3 minutes as opposed to my 5 minute steep of AoT’s. I’ll have to have another pot here in a little bit. I’d call this one a LS-lite. There’s a definite sweetness to it, and something slightly cocoa-like. I’ll be interested in seeing how this translates in a longer steep.

Boiling 3 min, 0 sec
Yours I Like This
6 likes
3 comments
Edit

You’re welcome. Yeah, I found it works best at a four-minute steep.

Well, I tried at 5 before I saw your comment. Much better, no watered-down taste, but I’m thinking Art of Tea’s is more, well, my cup o’ tea. This one is surprisingly sweet for a LS.

That’s probably why I liked it. It felt like it had “essence of chocolate” to it. I like natural sweetness on things. Still haven’t done the Art of Tea one yet. Kinda back-logged at the moment. (heh)

This is a great balence of smoke and classic Chinese red tea. Both amicably sit in the cup trading small talk while one does their everyday business. I’ve been breezing through this laid back lapsang which is fine since it’s so cheap. The steeping smell is intoxicating; it make me want to try it for cooking…

This is one of my favorite teas. The pine smell alone is intoxicating and reminds me of going camping. The tea is quite nice. Very smooth.

It’s not pure smoke, you can taste the tea, and it’s good :) I love cooking with it and taking it camping.

Beautifully balanced smoke and flavor. Tao of Tea is in Portland and is an oasis of calm. The staff are superb.

I’ve had Lapsang Souchong’s before that were mainly just…well…burnt tea. I like ‘em, but not much can be said about ’em. This one had a chocolaty note to it that added something extra. And it’s cheap if you buy in bulk. Can’t beat that.