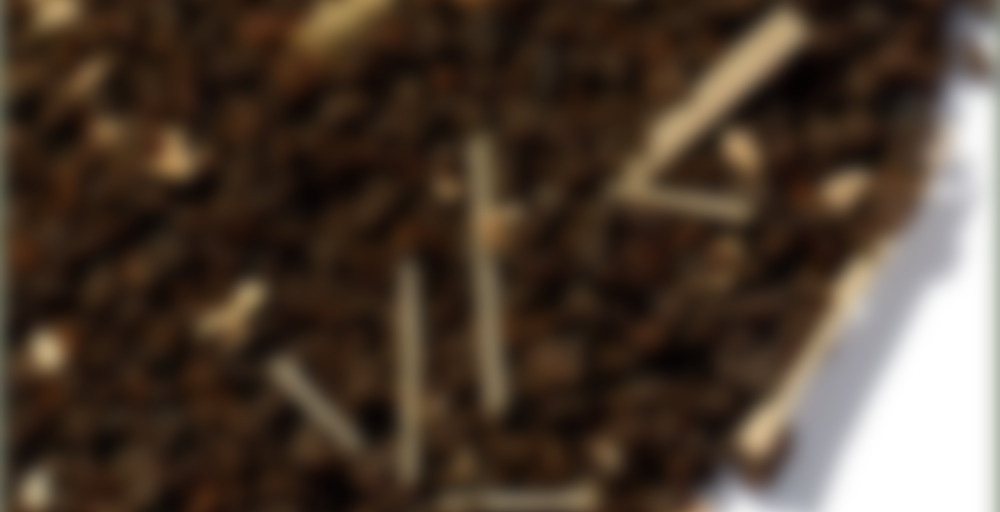 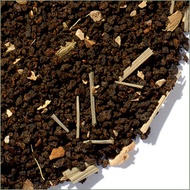 Our Lemongrass Chai Tea is a tea that will truly caress your senses. From the moment you smell this tea you know you are in for a treat. As you inhale the aromas of the chai, your senses delight in the exotic scents of the far east. Our lemongrass chai is produced with a base blend of Assam and Kenyan teas from estates noted for their good, strong, full-bodied teas. As you drink this tea, you may find that the presence of the lemongrass in the blend not only provides a slightly sweet scent of fresh lemon, but also aids clarity of the mind and an openness of spirit. Contains premium black tea, lemongrass, ginger, cardamom, coriander, cinnamon, cloves, and black pepper. Be sure to turn your container of chai upside-down a few times as the powdered spices can settle at the bottom of a bag during transit, or over time on a shelf. Use one teaspoon per ounce and brew 3-5 minutes in freshly boiled water.

The last of my samples from The Tea Table! I wanted to do something special with this one, so I brewed it extra strong and then made a latte with coconut milk and dulce de leche. Ooooh lord is it amazing! The chai itself is quite strong and spicy, with a lot of ginger. The lemongrass is prominent, but it doesn’t overpower the other spices. The base tea is very strong, even with all the other stuff going on, which I love. I like my chais strong in all respects, and this definitely delivers!

With the coconut milk it reminds me a bit of Adagio’s Thai Chai, only dare I say better. It’s stronger and spicier, but still with distinct lemongrass/ginger flavors that gives you that Asian feel. The dulce just takes it to the next level, adding caramel notes and delicious sweetness. As I prepared it this probably warrants a 100 rating, but of course I’ll try to contain my excitement and rate based on the tea itself!

EDIT: I made a second cup of this with all the extras and the flavor held up just as well—in fact, it was a little spicy! Chais often don’t resteep well but I think I could even get a 3rd out of this blend. I really shouldn’t be drinking two sugary lattes in a day, but my kitty is sick and I won’t be able to get him to the vet until tomorrow and of course I am driving myself crazy with worry so I need something comforting.

This I’m excited for. The smell of the dried leaves is pretty much what the name implies. You’ve got your typical chai culprits like cinnamon and ginger demanding attention but with a lemongrass blanket laid over the top. The brewed liquid is DARK. Dark as in, can’t see through my clear brewing vessel dark. The smell of the brewed leaves really makes me think of delicious fresh baked pie crust more than anything. Taste wise, this is interesting, but I actually ruined that part of the review. I had nothing but dinner on my mind, and I started eating my jambalaya before tasting this enough to think of what to put for the review. Lemongrass is one of my favorite scents, but I’ve never had lemongrass flavored anything. I’m hit with a vegetative and flowery taste first and foremost and that’s followed with the normal chai spices, but they’re pretty muted by the spice of the food. And actually, the fore taste is a bit muddled by the butter on the bread I’m eating as well.

I’ve taken way too long away from my food to type this, and I’m absurdly hungry. Back at it.