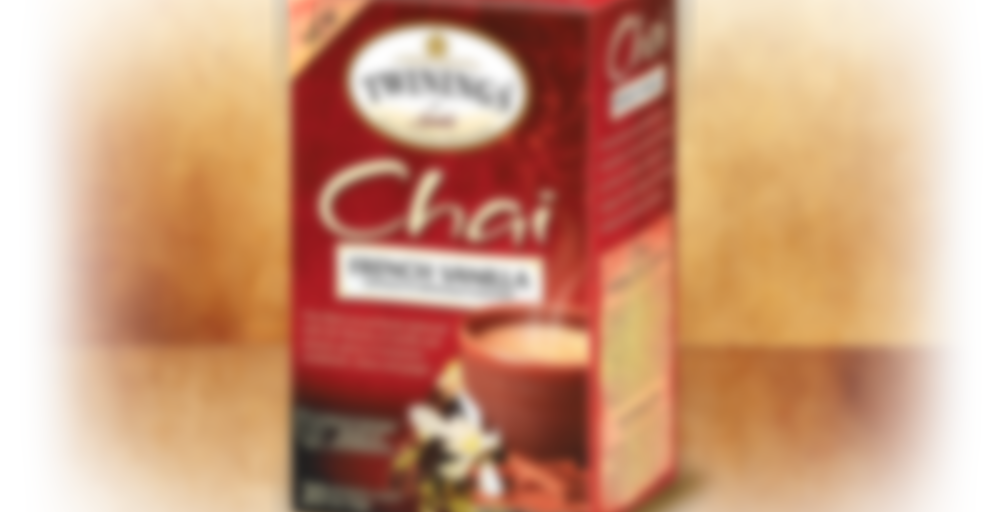 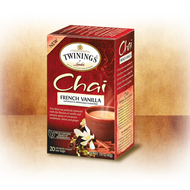 The finest black tea expertly blended with the enticing flavor of sweet vanilla and the savory spice flavors of cinnamon, cardamom, cloves and ginger to deliver a delicious tea with a warm soothing aroma and smooth, creamy taste.

Ever since I saw this in the store I have been curious about a vanilla chai. I like the spiciness of chai and I love vanilla. What could go wrong?

Apparently the other reviews were right. The black tea isn’t bold enough and the vanilla tastes more artificial than artificial vanilla extract. And there was no flavor before you added the milk. There was a delicious vanilla smell, but no flavor. So this is a chai you have to drink with milk. The one thing that is going for it is that it is sweet. Very sweet.

I won’t be buying this chai again but I will be drinking the box.

Bigelow makes a pretty good bagged vanilla chai. More vanilla than spice ( which i like), but not too fake imho.

I’m going to have to keep an eye out for that. The last time I had it I didn’t like it since I refused to drink it with milk. Maybe this time would be different.

My sister loves this one, and convinced me to add a bit of caramel (as in, dessert topping!) to it to “bring out the vanilla.” I was skeptical, but she was right, it really does!

Caramel makes just about anything better :)

I wasn’t impressed with this when I tried it last year and it turns out I’m not impressed now either. It’s not French Vanilla like nor Chai like but a watered down and tasteless version of the two. Also it’s so artificially sweet that my teeth hurt whilst sipping.

At least this was the last bag I have in my possession.

It’s always good when at least you can rejoice there’s none left.

Not gross… but weird… I can’t even discribe it. Artificial? Yeah… that’s it… Fakey Fakerton from… ok yeah I’m gonna stop now. But it’s so weird. Almost like it was made from a weird extract or syrup (w/ no sweetness).

I almost grabbed this at the store last week. I’m glad I didn’t now!

I have the apple to try yet, but so far I’m 2/3 for their chais. This one was just weird. Could very realistically be better w/ milk and/or sweetener. I just need some time before I bring myself to try it again lol.

Sorry to hear it’s so fake tasting. I was thinking of grabbing this one but I will pass!

Gift from a co-worker who loves strong black teas.

I am shocked by the mild nature of the black tea in this blend. It relaly takes a back seat to the cinnamon and vanilla.

Post-Steep Additives: one honey stick. Now the flavor is a nice mellow sweet cinnamon, with hints of vanila.

Just too mild for me. It was a nice sipping tea, but I want my spiced black teas to have a kick.

I thought this was too sweet (even though I like my chai sweet) and not very vanilla tasting. There is something artificial about it, but it doesn’t even taste like artificial vanilla flavor. I managed to finish the whole box, but I prefer the regular chai flavor instead.

Not terrible, not great. Tastes like french vanilla non-dairy creamer.

A friend at college gave me a bag to try. It’s not bad, but it’s not my beloved Ultra Spice Chai. I’ve always liked vanilla, but it doesn’t need to be in chai tea. That said, I did enjoy it, though, probably not enough to go out of my way to purchase a box of it for myself.

Boiling 6 min, 0 sec
Yours I Like This
1 likes
3 comments
Edit

What’s a better price than free? Right? As long as my friends want to share it, I’ll drink it! XD

True, actually I give a lot of ratings like this (or the reverse, low, but I love it) because I rate based on accuracy and leave the tasting note space for commentary.

I’m usually unimpressed with Twinings. This may be the favorite I’ve tried from Twinings but ONLY because it is a chai tea. But the black tea here is weak. The cinnamon is stronger, but it doesn’t even seem like a real cinnamon. And the ingredients even list an ‘artificial vanilla’. What does that mean? There isn’t much vanilla here anyway. And it leaves sort of a starchy filmy taste in my mouth! There is another odd flavor too.

I agree with everything you’ve said here. Their other chais; however, are amazing!

I appreciate that you’re always reading and commenting on my reviews, though I don’t expect that! I use steepster basically as the tea extension of my brain, so that I can remember tea related things. :D

People have said that to me about Facebook. How can one comment in a social network setting that has a “comment” feature and not expect them?

I’m in love with this tea. It’s definitely not a strong chai by no means but the vanilla works unbelievably well for me. As soon as the water hits the teabag and the aroma wafts into my nose my eyes roll back into my head and I shiver in pure ecstasy. That split second moment right when the aroma of sweet french vanilla and exotic chai spices hits is worth dying for.

Sometimes I hover over it while its steeping and just breathe it in, it smells that good.

10 minutes later I add a gallon of honey and I have to fight the urge to drink it in one continuous gulp.