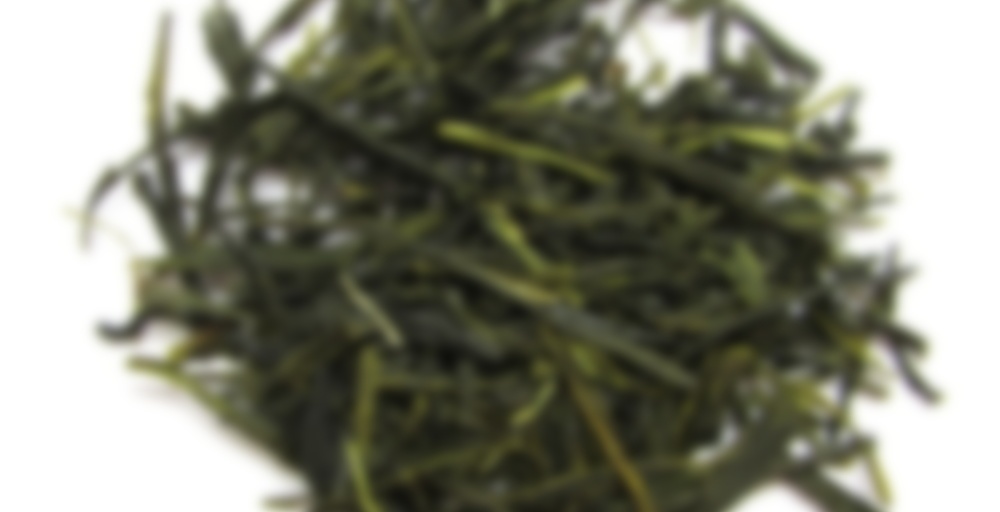 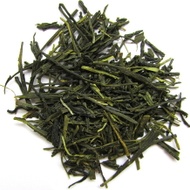 A smooth sweet grassy tasting Sencha, produced from the Taiwanese cultivar Qingxin Da Pa, which is usually reserved for Oriental Beauty giving the tea a smooth sweetness which isn’t found in other Senchas.

Ouch. A tea without my note.
And I have it at work for… quite a long time. It was in the first batch I took with me to the office and I am drinking it very slowly, though it is opened bag… so maybe my notes are affected with age, not a good store (it should be at least in some air-tight container, instead the original opened bag).

Well, happens. This tea I had today at work, while having my head buried in material inventories, which must be exactly down to gram. Checking it each month is stressful job, but luckily it was correct.

I am not sure about used tea — two pinches are…?
This tea was today mild, grassy, when warmer it was buttery with umami, but as it cools down it became rather freshly cut grass, a bit seaweedy and smooth. Umami was in the same level as in hot cup.

As I do not have much (if any) experience with Japanese sencha, I can not compare it. Nor with senchas from other terroirs. However it was fine and quite easydrinking cup. Shame, I let it opened for so long. It is mostly because I do not have kettle with temperature control at work; and using too hot water doesn’t suit this tea well. Tested!
I am not sure about the harvest either. I have original label there… but of course I haven’t checked it. I assume it could be from 2020, because it was one of the teas I have received from White Antlers.

Update, it is indeed from 2020. Prepared it today again and it was more towards mineral notes, but still pleasant.

I miss White Antlers. Hope she is okay. No way to contact her.

We all hope… I haven’t heard from her either.

From my swap with AJRimmer.

It’s been a while since I’ve had an unflavored sencha. I actually have quite a pile of samples from my Yunomi subscription, just waiting to be tasted. But since I’ve been trying to get through rating all of the flavored teas in my cupboard, I haven’t been drinking many straight teas.

This is an interesting one. It reminds me of a combination of both Chinese and Japanese green teas. There’s the intense spinach character and umami that I expect from Japanese greens, and also a lighter, sweeter vegetal note and aftertaste of apricot that I often get from Chinese green teas. A hint of bitterness at the end of the sip, but no astringency.

It’s tasty! I really should drink more straight green teas, as I have small piles of both Chinese and Japanese samples just waiting to be opened…

Here’s another review I’ve been sitting on for some time. I think I held off on posting this one simply because I was not sure where I was going to go with it. I know several people rather liked this tea, but it was just so strange to me. Allow me to explain. This is a Taiwanese approximation of a Japanese sencha produced from the Qingxin Da Pa cultivar, which I have been led to believe is mostly used for oolong as opposed to green tea production. If you’re going to try to approximate a tea as distinct as sencha, why not use a traditional sencha cultivar? It just seems that using an oolong cultivar defeats the purpose. This line of thought reminded me that sometimes I look forward to reviewing a tea that is doing or at least trying to do something new and unique. Other times I have difficulty motivating myself, and well, this was clearly one of those times.

Prior to the first infusion, I picked up mild nutty, grassy aromas coming from the dry tea leaves. In the mouth, I found touches of cream, butter, grass, and chestnut. The second infusion brought out an indistinct sweetness and hints of spinach on the nose. In the mouth, I found notes of sugarcane, spinach, grass, cream, butter, and chestnut. I also noted a floral, nectar-like sweetness and hints of minerals on the finish. The third infusion brought out heavier spinach aromas on the nose. The tea liquor was grassier with a heavier mineral presence and emerging hints of seaweed. The fourth and final infusion didn’t offer much on the nose. I picked up minerals and a hint of seaweed, but that was about it. The tea liquor was heavy on the mineral and seaweed notes. There were also lingering traces of grass, spinach, and butter. I didn’t find much in the way of nuttiness or sweetness at this point.

This was a difficult tea to rate. I kind of touched on that in the introduction. As much as it looked like a sencha and clearly wanted to be one, its resemblance was largely superficial. My experience suggests that sencha can often be quite full-flavored and this tea really wasn’t like that. The mouthfeel was softer and the little hints of sweet and savory reminded me that this was clearly a tea made from an oolong cultivar. This was not an unpleasant tea to drink, but graded on how well it approximated the character of a traditional Japanese sencha, it didn’t quite hit the mark for me. All in all, I’m glad I took the opportunity to try this tea, but I would never turn to it over an authentic sencha.

An interesting change of pace from regular Japanese sencha. Closer to a Chinese green tea in character, it has long needle like leaves that when steeped give a pale yellowish green liquor and a buttery, clean vegetative taste with a hint of chestnut in the finish. However it lacks the umami and grassiness of a real sencha. Think of it as a Chinese green tea minus the nuttiness.

Taiwanese green teas from my experience are pretty mellow and this one is no exception. It’s low on astringency and has a soft and mild flavor. Personally I found it a a bit bland for my taste but I think this would be a good green tea for newcomers.

Again, the description is spot on: “A smooth sweet grassy tasting Sencha, produced from the Taiwanese cultivar Qingxin Da Pa, which is usually reserved for Oriental Beauty giving the tea a smooth sweetness which isn’t found in other Senchas.”

There is no doubt that this tea is a Sencha Green tea though. Unlike others, it has a very clean tropical taste that is more breezy than seaweed like. So highlights are clean body, a sweet healthy green taste, and great re-steepability. Of course I brewed this gong fu. Sencha lovers rejoice :)