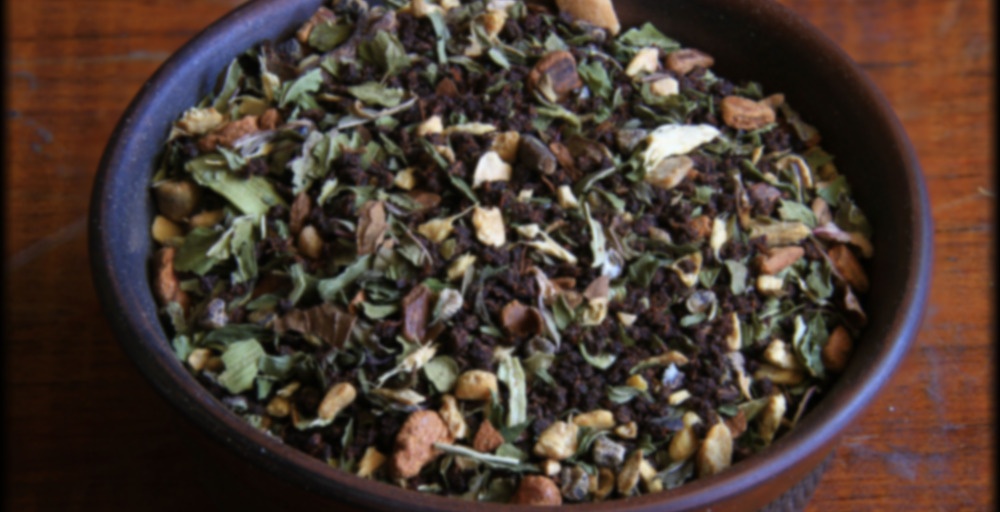 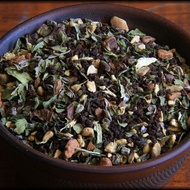 by Whispering Pines Tea Company
79
You

The perfect warming tea for chilly mornings or as a latte in the winter – peppermint chai is both invigorating and refreshing!

This blend was perfected throughout a period of one year and is made with 100% organic spices, organic peppermint, and our delicious Kenya Sunrise Black Tea!

HOW TO BREW THE PERFECT CUP:
Steep 1 tablespoon of leaves
in 8 ounces of boiling water
for 5 minutes.

I hate adding teas to the database, and I royally messed this one up. Can anyone help me? I forgot to add an image, and Steepster won’t let me edit the information. I guess because I posted it?

Anyway, I was sent a sample of this along with an order I placed on Cyber Monday of Whispering Pines chai blends. I was really excited to get the sample, as it made me feel special. I’m especially glad I got this sample, because I like it a lot more than the Masala Chai blend, which is a really nice tea, but which I think demonstrates that maybe Chai blends are not so much my thing.

Anyway, because I like this tea more, and because I’m about to finish the sample, I decided I would post a log note. I’ll make one for the Masala Chai blend later, but I’m waiting to decide exactly how I feel about that tea.

The brewing instructions for this tea are the same as the masala blend, 1 TBL for 5 minutes at boiling. I think that 1 TBL of tea would brew way too strong of a cup, as this tea, like the masala blend, is STRONG. I brewed 1.5 teaspoons of tea per 1 cup of water for this brewing, as I found out with the masala blend that such a tea to water ratio worked for me after trying a couple of other ratios.

I take my tea without milk, so maybe with the Whispering Pines suggested chai recipe which has half water to half milk ratio, 1 TBL of tea works. Honestly, this brews so strongly though, that I probably would still cut my tea back.

Anyway, I’ve been cramming out a paper all day yesterday and today, due today of course! And it’s cold in my room, so chai seemed appropriate. I also thought I’d brew something novel—thus my sample.

This is such a rambling log note. Hopefully my paper makes more sense. Anyway, the base on this tea is good I think, but it is heavily spiced. The base is Whispering Pines’s Kenya Surprise, which is a CTC black tea. The tea in this brews strongly and has a very nice black tea taste without a lot of bitterness from what I can tell, and when I place my next Whispering Pines order, I hope I remember to buy an ounce or two of the base tea to try by itself. I think I actually really like it.

I also like the blend of this chai and the masala chai, which is very similar. I taste a lot of cardamon, which I really appreciate, as that to me is the most detectable spice instead of the cinnamon or cloves, which I think think is a failure of a lot of chai blends. I really like cardamon. However, the blend is very even. In fact, in theory, I like this blend so much that it lead me to the conclusion I’m not feeling chai right now, because this and the masala blend are great teas and great chais.

I can’t quite detect why I like this tea better than the other blend. They are very similar, and this one works for me so much better. Obviously, the technical reason is the mint, but I don’t know what about the addition of the mint suits me more than the straight chai blend. I’ll attempt though, because the whole point of a tea log is for me to describe tastes in vague difficult to pin down terms, right? I think the mint adds a sharpness to the tea which actually rounds out the spice blend. Since I’ve been drinking these two chai blends without milk, I think the roundness is necessary (although, as a note, I added milk to one of my pots of the masala blend, which will come up in my review of that blend, which I will write eventually.) Furthermore, it somehow makes the blend taste a bit lighter and like—fluffier. (Now my language has gone off the deep end. I’ll stop now.)

Anyway, I like this tea a lot. I probably won’t buy the masala blend unless I need to have chai on hand for some reason. But I might reorder this tea. It’s really lovely actually. Oh, and I got 1 great steep from it, a nice second steep, and a half-way decent third steep last night, which is notable. The second steep tastes more heavily of the spices, which is a really interesting difference. I like when teas have significant flavor changes with steepings.

hey, managed to update this tea for you…. the picture is now front and center. =0)

Thank you! I felt terrible about it and tried like three times. I was beginning to feel kind of pathetic!

So, there are two mint Chais in The Box and both smell pretty good so I’m taking advantage of my day off to do a side by side comparrison of the two. So the other one I’m drinking is Rishi’s Vanilla Mint Chai. I prepared both the same way; same amount of leaf, same steep time, same water temp and I’m pretty well just alternating between cups of them.

And I have to say, they’re really NOTHING alike. This one definitely seems more like a Chai to me; it’s smooth and has much more noticeable spice flavours in it like cloves and ginger, which both very much stick out to me. The cloves, which I love, balance off the ginger for me, which I hate. I would have said I tasted fennel too, but I don’t see that in the ingredients list. Odd. The mint in this one is also much crisper and I feel like it suits the Chai element really well. Everything just kinda “pops”.

And then, as a whole there’s something very very familiar and weird about this one. It took me a long ass motherfucking time to place what – but as one component, without breaking down the flavours, this reminds me EXACTLY of the Halva that the East Indian Convenience Store near me in Regina (my old city) used to sell. And it’s so weird to me that that happens to be the flavour that this one reminds me of because the Halva that they sold there was like this sweet, very nutty melt in your mouth buttery kind of pastry – but with an almost “cotton candy” like feel to it. It’s kinda hard to explain, I think, if you haven’t had it before.

It’s delicious though – and now I’m feeling really nostalgic? And why the ever loving fuck does a MINT CHAI remind me of sweet nutty pastry? My tastebuds are confused, but on board with this.

Oh, here’s a link for people who have no idea what I’m talking about: http://en.wikipedia.org/wiki/Halva#India

I love halva, but I love just about anything sesame related.

An error of mine (well, PayPal’s) found me getting my stash of this three months after ordering it, and having completely forgotten that I even grabbed it. So, I wanted to really check out some of these teas ASAP, as I realized they’re mostly new, with few reviews posted. Since I’ve been on a huge chai kick of late, I thought this was a fun place to start.

1/2 tb per cup? Hm. Well, I brewed this with 4 tsp in 12oz, which is 1.25 tb… I guess on par with the recommendations. It makes for a very, VERY strong brew. Fine with me, because I kinda like it. Very chai-like, however the first and most present note is the mint, which both cools the throat and the tea’s heat/spice. It’s almost like having one of those icy hot candies in your mouth, with both the heat and the cool present at the same time – but with a chai background instead of chocolate.

With cream added, the mint almost completely disappears, and this becomes a mild chai with a hint of something tart and almost… drying. I get the mint feel and faint flavor if I open my mouth to inhale through it after, but otherwise (for me) the mint goes poof bye-bye.

Interesting, unusual tea. I have a feeling I’ll go through this small size quickly because of the quantity needed, and to see if I have a different experience next time.

:) So glad your order is finally in the right persons hands! As for this tea, I would recommend steeping it using the traditional style parameters, which can be found here: http://lifethroughthepines.blogspot.com/2014/02/chai-guide.html