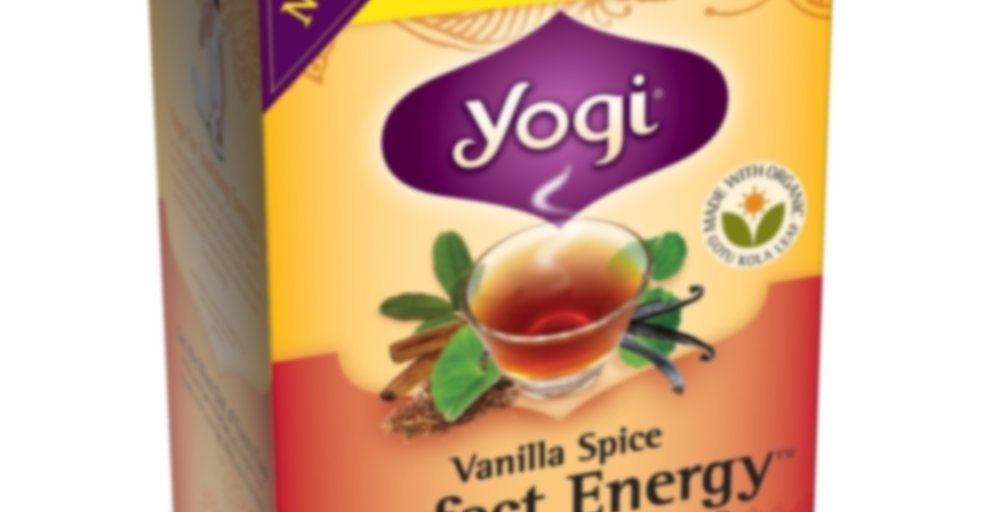 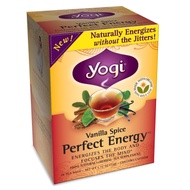 Yogi Perfect Energy provides the “perfect” energy boost. It is a unique blend of tea with naturally invigorating herbs that energize the body and focus the mind, without jittery side effects. A complex and delicious blend of Green Tea and Assam Black Tea invigorate the body, while natural amino acid L-Theanine promotes calm, mental focus. Ayurvedic herbs Organic Gotu Kola Leaf and Ashwagandha act to balance and energize naturally. Flavored with vanilla bean and exotic spices, this delicious tea is sure to energize the body while calming and focusing the mind with every cup.

I needed a bit of energy this morning after last night’s Halloween antics with 4 kids and a husband in tow. So this one came out. It came from a sample box from KallieBoo, so thanks go to her :)
To be honest, I’m not really digging this tea. It’s too rooibos-y for me. It does have some redeeming qualities though. It’s hot, slightly sweet, and has some spice taste to it. Not one I’d buy for myself though.

I’ve never had much luck with Yogi teas. Too many funky things that distract from whatever the “real” flavor is supposed to be.

I agree with you both, although the Energizing Mint is pretty decent. There are usually a lot of funky (and not the good kind of funk) involved. Blech.

Well now I know. lol Definitely don’t like that ‘cluttered’ feeling in my tea.

I got this from a coworker and today I could really use a boost. I’m practically falling asleep here as I type this.

Now, Yogi and I are not friends. Everything I’ve tried by them has had all kinds of weird medicinal aftertastes. Plus, they tend to put licorice and anise in everything — which is great if you’re drinking absinthe, but I don’t like it in my tea! This one smells strange dry, as I expected. Not like vanilla, that’s for sure. More like the inside of someone’s spice cabinet. Too much going on at once.

As it steeps, the water changes to a shade of brown I’d expect from a black tea. It smells much more like vanilla and cinnamon now, but with some other herbal, chamomile-like notes. The actual taste is surprisingly pleasant! The vanilla is creamy and really lingers in my mouth. It’s complimented by the cinnamon, though the spiced aspect is pretty tame.

As far as the effects go, I’ll have to come back and edit.
EDIT: While this tea didn’t work any magic on me, I do feel considerably more alert. I can imagine this would be good first thing in the morning, right before work. But for now, I’m too far gone. Nap time…

Sure, I’ve done a lot of reviews like this before! Where should I send the info? You don’t have a “Send Message” button on your profile.

Tabby - you can try again (I just updated our email address, so perhaps it was still "loading." Or, you can email me from the website, or just type it in directly - infojustorganictea.com

MMM the first time I tried this I cold brewed it. I was at work and in need of something besides water. It was sooo creamy and delicious. It was strong too. So I was excited to try it hot :] It’s still creamy and delicious! Only hot. And paired with yogurt pretzels. Mm especially when they’re dipped in my tea. They get all melty and add some extra flavor to the tea. BEST SNACK EVER

I hope they’re not discontinuing this tea – I couldn’t find it anywhere on their website! Amazon still has it for sale, and I’ve seen it locally, so hopefully it’s just some sort of a glitch.

Anyways – I LOVE this tea. It’s strong and a bit sweet – I add a bit of honey and a dash of almond milk, and it’s mm-mm good that way. It also energizes me without giving me the jitters – I’m very sensitive to caffeine, coffee is WAY too much & leaves me shaky/irritable all day. This is perfect though. It’s my go-to morning tea at the moment.

Tried this because I had neither energy nor focus and needed both. I was pleasantly surprised to notice an actual perk-up effect after one cup.

As a rule, I don’t like Yogi teas because of their huge and obnoxious love affair with licorice. In this blend, however, it was about halfway down the ingredient ladder and while still too noticeable for my druthers, I could actually drink it without wincing. Vanilla and cinnamon were the taste leaders; couldn’t pull out any individual characteristics of the Assam or rooibos that appear in the ingredient list.

I haven’t gotten tired of the flavor or pick-me-up from this tea. My go to for travel and jet lag, an easy brew cup with a pithy note attached to the string :)

This and a bagged Oolong are my go to teas while traveling. If you compare this slightly vanilla and other spices to a loose leaf tea, it’s going to disappoint, but I think it’s one of the more drinkable bagged teas and not as in your face clove and cardamom as some bagged chai. I always seem to have this in my travel bag, so I thought it should be in me cupboard, not that my cupboard actually reflects reality, but I’m trying to get it closer. Vanilla spice will give me an alertness boost, and has a soothing flavor profile, I’ll probably keep reaching for it as a convenient pick me up when I am away from my infuser.

The key with this tea is to let it sit for a very long time so often I will put it in a thermos and take it with me. With long steeping times, the flavor becomes very spicy and full-bodied, almost like a chai latte. It gives an excellent boost of energy and requires very little sweetener to compliment.

I stopped by a health store the other day and as I was browsing around, I came across the tea section. I wasn’t really looking for something in particular but this one caught my eye because of its claims of energy. I recently started going back to school and my Monday classes start at 7:30 AM. Yes, super early classes at the start of the week are so agonizing! Anyway, to my surprise it did work!

Now mind you, I’m writing this review after only trying it once so this is just my first impression and I’m hoping that it won’t change over time. I steeped it in a re-useable venti Starbucks cup that was about 3/4 full of hot water and used two tea bags. I let it sit for about 8 minutes. Though I did not add any sweetener or flavoring, it tasted great! I actually didn’t add any milk and oddly it tasted like I was drinking a chai latte. The only downside is that it did taste watery and the vanilla flavor was very faint, despite using two bags and steeping it for a considerable amount of time.

I do recommend that you eat something while or before drinking this because if you’re easily affected by caffeine (This has 80 mg in one cup, so x2 I had 160 mg. Coffee has 90 mg in one cup) you’re going to want to counter the jitters or at least decrease them by having something in your stomach. I drank this during my research class on an empty stomach and I was very jittery and restless, but I did feel mentally alert. It’s been 4 hours since I drank this and the energy is still coming.

This is my first Yogi tea and I do like it and would be open to trying their other products. However, although it did stick to its claim and tasted perfectly spiced, I wish that there was more body to it.

The tea tastes good, but what I really don’t like about it is the box. It goes on and on about the health benefits in tea. Tea is not magic, people! The picture of the woman meditating with her hand on her nose got a laugh out of me, though.

This is a very nice, lightly spiced vanilla chai type blend. The spices aren’t very strong but they are certainly present. It reminds me a lot of the rooibos latte that Starbucks used to have. I think it was Tazo brand? It was my favorite for a while.

Looking at the ingredients, it does have rooibos and also stevia and licorice root (one of which would likely explain the slight artificial sweet note I picked up on in the very beginning). It’s been several years since I last tried this blend and my last note mentioned a bitterness, but I do not taste it here now. It must have been because I steeped it so much longer last time.

Thank you, Michelle, for sending a bag of this in my box. It’s definitely one I could see myself drinking regularly. It has some great ingredients.

I like this one for its caffeine kick, and mellow vanilla spice. And the small bit of wisdom attached to the bag.

I really liked this one – not overly spicy with a nice vanilla creaminess. And I love reading the Yogi tags too!