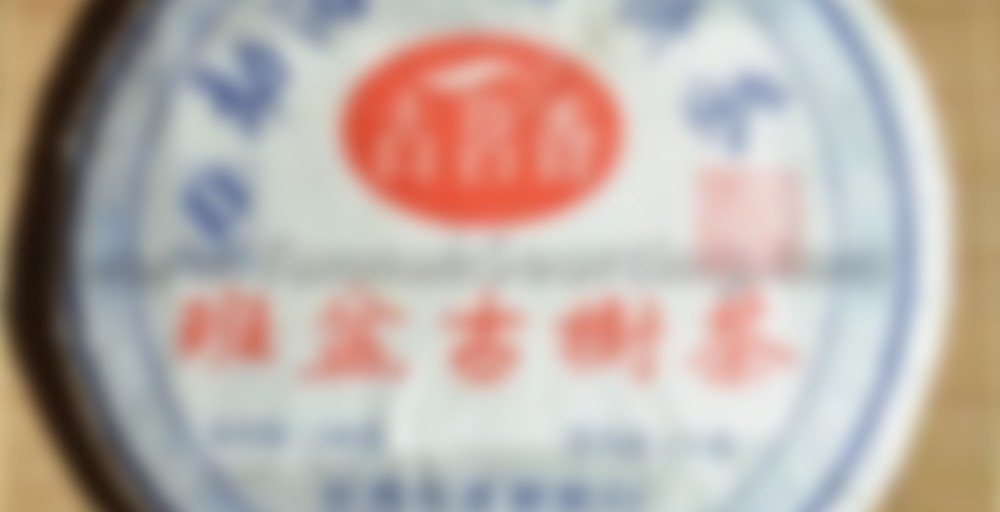 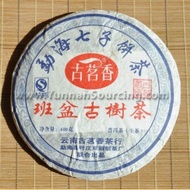 This is the fourth cake in the 2010 series of Bu Lang teas from Gu Ming Xiang tea factory. Made entirely from Spring 2010 tea picked from 200-300 year old trees from the village of Ban Pen. Ban Pen is a neighboring village to both Lao Ban Zhang and Lao Man’e. It’s also inhabited by Bu Lang people who earn the majority of their living from tea.

Ban Pen teas are similiar in Ban Zhang teas in appearance, and also have some (but less) bitterness, a fast hui gan and very good staying power both in the mouth and the gaiwan.

I was not feeling the best today, so I took out this sample I got from derk thinking it could be a good tea to cheer me up and relax. I think that worked to some extent, the tea kept my attention for several hours and allowed my mind to abandon some toxic thoughts.

My main takeaway about the tea from this session is that it indeed has a strong cha qi, not really of the dreamy kind though. It did help dissolve my thoughts, but didn’t really enhance the creation of alternate reality to replace them. The other thing I will remember this tea for is how much it reminded me of Dan Cong oolongs, more than any other sheng I can remember. In particular, I got reminded of Dan Congs of the floral/vegetal/buttery kind. Personally, I didn’t find the bitterness overwhelming at all and the astringency was almost unnoticeable among other characteristics.

The tea has a piercing aroma of sauna, peat, coriander seeds, wood, incense and a hint of smoke initially. Later throughout the session, I also picked up distinct peach and pine scents. The taste starts off bitter, vegetal, and crisp with a significant walnut flavour. Around steep 4, it gets more tart and floral, displaying notes of citrus zest, parsley, light smoke and meat. Aftertaste is sweet and cooling with flavours such as peas and honey. It has a good huigan and longetivity, as one would expect in this price category.

The texture is very viscous and oily, but the liquor feels light in the mouth nonetheless. After swallowing, there is an interesting milky mouthfeel and a slightly cooling throatfeel. As I mentioned already, the cha qi is strong and grounding. Early on, the sensation involves a pressure in the head and I can feel blood pumping in my face. Then there is about half an hour that I have almost no recollection of. I did meditate a bit and then I might have been sleeping but maybe not, I really can’t remember. After I came back from the high, my whole body was incredibly warm and relaxed yet alert.

Something about this tea rang a bell for me. I bought a cake after having only one session and sending the rest of the sample packet to you. It’s interesting you said this puerh reminds you of a dancong; it did nothing of the sort for me, though maybe another year on record has transformed it. I look forward to breaking the cake soon.

I imagine it has changed faster being broken up than inside the cake, but I would be interested to know your thoughts when you revisit it. It’s definitely one of the best aged shengs I have tried. I reckon it probably rang a different bell for me than it did for you, but I have been coming back in my thoughts to yesterdays session, so it definitely left a mark :)

It’s crazy you sent me half of the sample you had, I am very grateful :)
I recently got more samples of aged pu’er as I am trying to explore the space and educate myself, so this fit into that objective as well.

Three, yes three, years and this sheng has finally seen the light of day (see https://steepster.com/derk/posts/381729 for comaprison). Stored for the past 1.5-2 years in a 5-gallon crock that I’ve topped with a terracotta saucer and occasionally dampen with distilled water. Humidity is kept pretty consistent at close to 60-65% and the temperature fluctuates between 60F and 75F, both depending upon the season.

Wet leaf is pungent and savory. Old man in vest and chapeau. I think about a Scottish man sitting in a wooden chair in a vast expanse of wet fen on a rare sunny day. Some very hidden spice-clove and camphor notes. Tobacco and watered-down apple cider.

The brew is thin, cider-like, smokey but not overwhelming. It’s mostly a dry woodsmoke interspersed with tobacco ash. Bitter; aging taste for sure. Hay-like with a muted herbaceous quality in the background. Some cooling on the inhale. Short aftertaste in the first several steeps drops off as the bitterness finally gives way to a thickness and buttery date sweetness on the swallow. Negligible date returning sweetness. I am calm and grounded… at first (later quite chest-bumping). I like that in general I feel like my blood is heaver, fortified, thicker but that the tea is not thick and heavy in the mouth or stomach.

The color is a richer golden orange-brown now and still displays a little turbidity early, clearing up significantly pot after pot. As it clears, it becomes smokier, more acidic, more bitter, thinner in taste. More like astringent green tobacco-green wood-herbs, apple-citrus acidic. The acidity begs for food. Luckily my housemate brought home 3 pints of ice cream for me and our friend a few hours ago so I indulged in a small bowl and followed that up with toasted bread smeared with chive cashew cheese. Fatty and flavorful things.

One thing to note is no off flavors develop when completely cooled. The tea still tastes young but is developing aging flavors. Storage has cleared up the liquor, softened the smoke, bitterness, acidity and astringency and transformed the aroma of the leaf. The longevity isn’t there yet with this one and I still doubt Gu Ming Xiang’s gushu claim.

Overall, I’m happy with how this is progressing but I’m going to stash it away for several more years before trying again. I’m curious if I ended the session too early (my tongue says no) because of the growing rough character. I’ve had other sheng that start very pleasurable, transitioning to abrasiveness and ending on that note instead of a sweet one. Is this one of those poorly processed pu’er? Either way, it’s a very yang tea whose attributes are probably more appreciated and understood by seasoned palates. This reminds me of my vague recollection of Tea Urchin’s 2013 Lao Man E. I’ve never written a note for that one; I’ll get to it in due time.

I vaguely remember sampling this tea and remember thinking what I’ve thought about every other Kunming stored Menghai area tea I’ve had…primarily that I wish it had been stored in Malaysia.

The only Malaysian-stored Menghai region tea I’ve had is that EoT Baotang swoon Got any recs for others?

Sadly the best examples I’ve had are sold out, the 2005 Nanqiao Bulang Double lions from teas we like and the 2012 Bulang from EOT. The Baotang is excellent but a different animal. TWL has an 06 double lion that is reportedly close to the 05 but no cigar.

Dry leaf smells really good and complex already but I can’t put my finger on it…Once I rinse then it becomes apparent that this tea is going to start smoky….which I thought I didn’t like because it can be too harsh
In the early steeps I rapidly realize that this is a treat. The wet leaf smells like smoked sweet sausage. Just from two sips I’m already getting a lasting gan, this tea is so strong. But it isn’t heavy. Instead I’d describe it as uplifting. The taste is savory, strong, bitter and making me feel lightheaded. The cup is sweet but with that savory smoke going down without bitterness or astringency. Time has done this well.
Already its getting heavy and fills the mouth by middle steeps. It is neither drying nor sweet though, instead just heavy and savory.
By the end of this my burps were as if I had eaten a lot of bacon—yummy :). I highly recommend, even for people like myself who thought they didn’t like smoke-leaning sheng.

Another one from the backlogs. The main reason I delayed writing about it so long is that I found it rather confusing… In the first session it was sweet and slightly citric, with good kuwei, overwhelming huigan, and a wonderfully calm and relaxing qi. Second session I could barely detect any flavor and the qi was very light as well. By the time I got to the last session, I had 7g leaf left and decided to use it all at once. The citric notes and bitterness came back, but with an almost metallic tinge to them this time. Happily, the qi was back to its original calming, sedating self. I’d like to try this tea again, but especially with the way the price has risen I don’t particularly want to gamble on a full cake. It was very interesting, but the middle brews of the sample were underwhelming and the metallic taste was a little difficult to appreciate. I honestly have no clue if I’d recommend it to anyone.
5g leaf, boiling water, 100ml white2tea ruyao gaiwan. Last steeping used 7g.

I didn’t like this tea. Gorgeous materials but I had a hard time getting anything out of it.

Yeah, it’s frustrating. It was honestly pretty interesting and enjoyable with extra leaf, but again, I’d want consistency and less funky metallic taste before I went any further. Hobbes liked one of their other teas (xin ban zhang), but all their stuff had almost doubled in price on YS by the time I made an order. Oh well.

I’ve decided to revisit the beautiful Bulang mountain range this morning with a 2010 Gu Ming Xiang Ban Pen sheng. The wet leaves, which are of an impressive size and produce a delightful amber liquor, radiate an aroma that I can only describe as smoky vegetal (I believe this aroma is similar to the aroma found in the Lao Man E sheng I described not too long ago). Frankly, the aroma isn’t as impressive as say a Jingmai ,but I suppose this is expected from a Bulang. What is impressive is this teas profile and kou gan. The tea exhibits a pleasant transformation from a light bitterness to a subtle sweetness. It only takes a few sips of this tea to bring out a well balanced astringency and Hui Gan in the mouth. IMO, this tea is a fine tea. It has a lot of character. I look foward to drinking it a few months down the road! Perhaps an 84/100 is fair assessment.