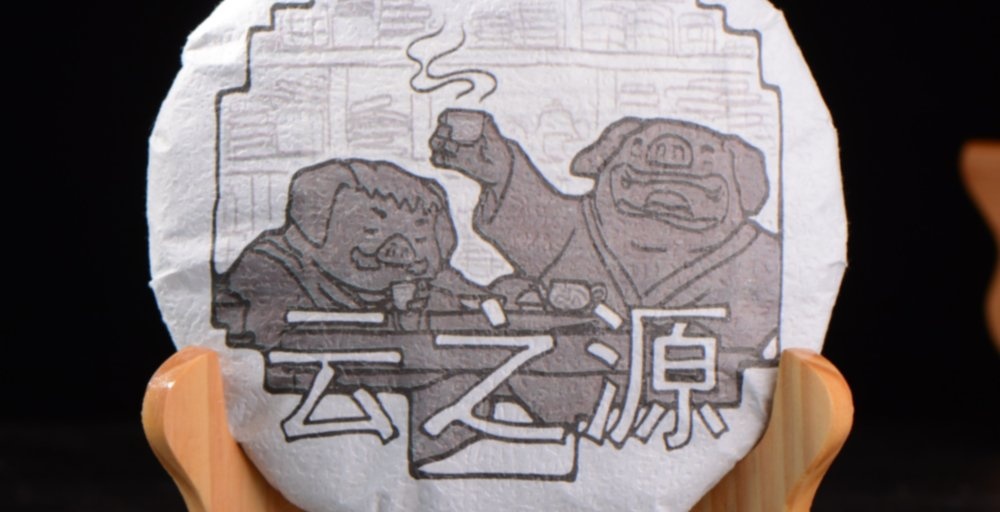 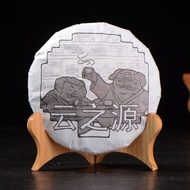 This is purely Lao Man’e village ripe pu-erh tea harvested in spring 2018 and then wet piled in the late summer of 2018.

Entirely Lao Man E old plantation material Lao Man’e village in the Bu Lang mountains. Lao Man’e is a village in the Bu Lang Mountain range, not far from Lao Ban Zhang and also quite near Jie Liang village. Lao Man E tea is something in between the extreme bitterness of Jie Liang tea and the bitterness with fast and sweet huigan of Lao Ban Zhang tea.

This is a very strong tasting ripe tea, with a creamy thick taste and feel to it. It’s very infusable going many rounds before losing it’s powerful taste and aroma. With age it will become more infusable, more complex and more aromatic. The cha qi is all enveloping, but not over-powering. The tea settles into the mouth and body in a very nice way.

Of the dozen or so ripe samples I ordered recently from Yunnan Sourcing, this is one of the ones I was most excited to try. For a fair comparison, I used the same teaware as in my last two reviews: 160ml Yixing zini teapot accompanied by teacup and cha hai made from Jianshui clay. The amount of leaf was also near identical – half of my sample, in this case 13.1g.

For boutique ripes like this one I’ve recently abandoned flash rinses in favor of doing a longer 10–20s one and drinking it instead of discarding. This one was strong and flavorful for a ripe, immediately piquing my interest. It was sweet and bitter, with some berries present in the aftertaste, which was strong and stable. In the wet leaf aroma I could pick up currants, sour bread and some charcoal.

With the leaves primed, the first proper brew was strong indeed! Very bitter, in a good way. I could even taste the grapefruit note which alongside the notorious bitterness is one of the trademarks of Lao Man’e for me. Capital! As the infusions progress, the bitterness gradually fades a little, allowing the fruitiness to shine through and present a more balanced tea. While there’s more tartness than sweetness, there’s definitely some huigan to complement the bitterness, not too much though.

The body starts off good but not impressive. However, as you’d expect it does improve with extended brewing times. The texture is very smooth and the tea goes down easy. As the steeping times grow longer the soup becomes increasingly more oily. In the mid steeps I experienced some cooling sensation which is also where the tea was at its most refreshing.

As the infusions progress, the tea grows smoother and smoother, the seventh infusion actually being my favorite of the session, presenting the perfect balance between the bitterness and the zesty fruitiness while also being as smooth as can be. As the tea begins to lose steam, the texture starts becoming more chalky, resulting in at least the impression of it being slightly chocolaty as well. While the grapefruit doesn’t fade completely, the taste starts to become more earthy resembling a more typical shu. I may have picked up on some plums as well.

And there you have it. What a tea, what a tea! Those who have been following me for a while likely know that Lao Man’e is my favorite sheng pu’er production area and man did this tea deliver. It’s nearly everything I could hope for in a Lao Man’e ripe. I’m incredibly impressed at how this tea manages to retain most of the character of the young raws from this village while rounding off some of the harshest edge of the bitterness and offering you all that ripe pu’er goodness. The wet piling process has been truly immaculate.

This is without a doubt the fruitiest ripe pu’er I’ve ever had the pleasure of drinking and I have no idea how they accomplished that, especially given how incredibly dark this tea brews up. Great, pleasing bitterness is one of the most sought after qualities in a ripe pu’er for me and while this one isn’t perfect, I do enjoy the bitterness in this one a lot. I did manage to make the bitterness somewhat abrasive even by my standards by trying to push the tea a little bit harder in one of the middle steeps, so I would recommend paying attention while you brew.

The qi in this one is one that builds up over time. In typical Lao Man’e fashion it can make one feel a bit restless, but thankfully at least I didn’t find it to grow too potent over the course of the session even if it did start to get a bit heady toward the end. I was using a fairly large vessel for a single person, though, and a somewhat heavier ration than I typically would, so more sensible sessions will probably be fine.

For those who are curious about how this compares to the Hai Lang Hao ripe pu’er brick, I did review that one a couple years back and my thoughts on it back then were quite mixed. For a proper comparison I did order a sample of that tea as well and just finished drinking it right before beginning to write this review. I wasn’t a fan of it before and now I think I’m ready to say I don’t like that tea. The cha qi in it really doesn’t agree with me and for me the lack of sweetness or any other notable flavors besides the bitterness just kills that tea for me. That’s my short take on that, but obviously feel free to order samples of both teas if you are curious.

I’m going to hold off on making any purchase decisions until I’ve tasted my way through all the ripe samples I ordered, but I’m going to tell you right now that this tea immediately became my favorite ripe of all time. It’s that good. Unless there’s another really great tea among the samples I have, I’m likely going to be picking up at least two or three cakes of this one, if not more. While this is not a cheap tea, it’s priced really reasonably in my eyes relative to the quality.

If you’re not a fan of bitterness or single-origin teas, this one’s likely not for you. Otherwise I highly, highly recommend picking up a sample as this tea deserves to be experienced, even if you don’t end up loving it.

I am glad you liked this one so much! :)

It is interesting that I preferred the Hai Lang Hao’s Lao Man E shou over this one by quite a margin. However, since I still have both, I am planning to do another round of comparison soon. For one, I expect this one to have settled much more with another year under its belt.

I’ll definitely finish my sample of the Yunnan Sourcing one before ordering any cakes, just to make sure this session wasn’t an anomaly. While I’ve really liked nearly all the Hai Lang Hao ripes I’ve tried, the Lao Man’e didn’t agree with me three years ago and drinking it today I didn’t notice any improvements. I still have half a sample of that one left as well, so perhaps my next session will be more favorable, but I’m actually not looking forward to revisiting that tea, I gotta be honest. I also have a 10g sample of the Hai Lang Hao “Jun Ai” and that one I am very much looking forward to trying.

Now I have to try both of these. Awesome review!

I had another side-by-side comparison session today, featuring two Lao Man E ripe pu’ers that I own – this one and Hai Lang Hao’s one pressed in 2016. They really are very different teas, the former costs less than half the price and is pressed into much more accessible size of 200g vs the 1kg brick. In spite of that, I would prefer to buy the latter the next time I am searching for a bitter shou, and it’s not even close.

I am definitely open to the possibility that YS’s 2019 tea changes significantly over time, in particular in its flavour profile. However, its relatively high fermentation level makes me skeptical of groundbreaking transformation. Also, the fact that it lasts about half the amount of steeps as the other one and less interesting and thinner mouthfeel are unlikely to change significantly in any case.

That being said, I can definitely see some positive changes in the one year since my last note. The aroma has retained its complexity, with some added notes of berries, leather, wood, dried mint, and coconut chocolates. The taste isn’t fishy anymore. It still has a similar nice bitterness reminiscent of dark chocolate and wood, but with more sweetness akin to brown sugar and molasses now. Aftertaste starts of biting and bitter, which then turns into more of a sweet and sour profile, with a balsamic vinegar note and some spiciness as well.