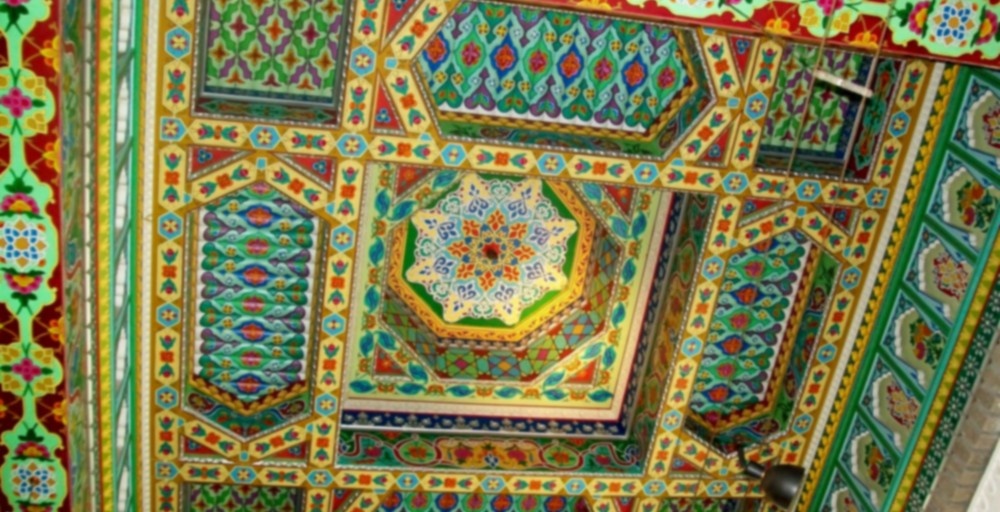 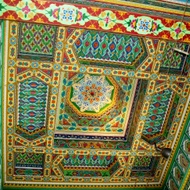 by Boulder Dushanbe Teahouse
66
You

Yesterday was Mothers Day. My daughter Annalisa and I usually take off for the day together…all…alone… without her 7 children and we play!
She had planned for us to see the new movie “The Best Exotic Marigold Hotel” with Judie Dench (first 2 showings were sold out), and I picked the Dushanbe Tea House for lunch in Boulder since she had never been there before.

(Google this tea house. It is hand painted and assembled without using nails and a gift from Tajikistan to Boulder (sister city).) The icon left is a picture I took of the ceiling.

We had a great seat at the tea bar and the wait staff were very attentive. I asked about the best Puer’s and this Black River was suggested. The waiter brought me the 3lb. foil pouch to sniff the Puer but alas, his hands were covered in lime juice and that’s all I could smell. He placed some dry Puer in a cup (without my asking) and still the odor from the kitchen and bar were too strong. I decided to try the tea at any rate.

My pairing (and my daughters) was a delicious and light focaccia fench toast.
A western style teapot was set before me with a 3 minute timer, teacup and small bowl for my steeper basket. The wet leaves were huge and darkest brown almost filling the basket. They smelled like leather and beets but, it was not a very good smell.

I tasted the tea and wished I could have had a glass cup to look at the liquor because it tasted like dust. Not dirt, but like it was dusty. Instead of the earthy or musty Puer flavor, there was a dusty bad taste of bad beets that I did not like at all. It was so rancid tasting that I could not drink the tea. Not wanting to make a scene on Mothers Day, out with my daughter, I waited until the end of the meal and asked if the Puer had been rinsed. The staff had no idea and said not all of the Puer’s are rinsed first. Oh. This is what I suspected. That and the fact that this was at the bottom of a 3lb. foil bag. If waiters with lime hands are just grabbing instead of pouring or using tongs, other flavors are getting on the Puer.
I have a sensitive nose and taste buds. Blech to this Puer! It was one of the worse I’ve ever had!

On the other hand, the service at the Dushanbe is the BEST! The waiter had me fill out a card so that the service on the Puer could improve. That is promising.

And the movie was so much fun. I think I’m Judie Dench in India! What a hoot! I hope you all had a wonderful day with mom’s or being mom’s.

Something Personal and goopy…about Mother’s Day…Warning!
Every year I get very depressed at not being a better mother to my two children. For many years I was a single mom. I wanted so much more for them and I should have been a wiser mother in many instances. Every year, I hide away and don’t want to see anyone on Mothers Day. I cry.
And then, my daughter posted a beautiful love note to me on Facebook that broke me down yesterday morning and my son called with love and I had to take it all in.
Love your mama’s… we are more fragile than we let on sometimes!

ew. sorry about the icky pu-erh!

That sucks about the puerh, but glad that you had a good mothers day! <3

Dusty tea! eeek! I wonder if they rinsed…

Don’t think so….that’s what I asked them too!