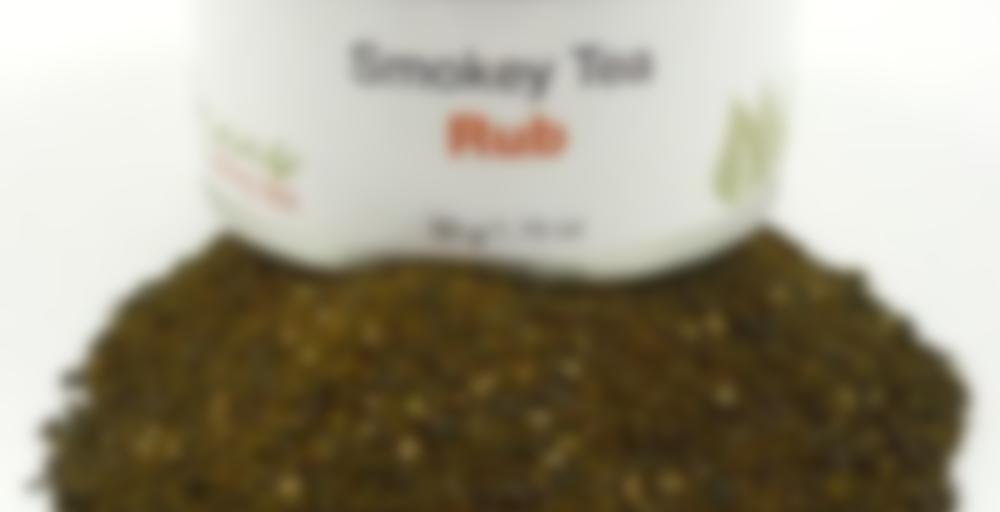 Add this hand blended rub to your steaks, ribs, fish or vegetables for a smoky/spicy edge. Simply amazing!

I bought this at the 2016 tea festival. Since then, I’ve cooked maybe half a dozen dishes with it. Mostly chicken. The stuff is potent! Only a third of the tin has been used up. Amazing value!! Mind you it doesn’t need much. Half a teaspoon is more than enough for a typical dish. I use it to accent, not as a main attraction :P
When I run out, I hope to buy the lemon green version (already bought it but gave it away as a gift! I’m not sure if they tried it out yet, but it smells heavenly).
The best part? Very little salt!! So if you want more salt, simply add it yourself. Seriously. I can’t tell you how much I appreciate that aspect. Far too many rubs out there are salt heavy. That factor alone is why I hadn’t bought any rubs previously.

Today I made vegetable soup, and despite some people not liking smoked tea (or smoked anything) it was a big hit. I had a feeling it would pair really well with a beef base. I marinated the sauce in olive oil on my stove for a few… sauteed a bunch of veggies in the saucepan, and then added water/the base. Will be trying it again with a cream based soup of some kind. Also paired super well with the onions so I may make an onion sauce one of these days. Oh and I sprinkled in some chili flakes. Perfection.
I’m not a fan of stringy meat, but if you enjoy roast beef or brisket, I’m sure it would go really well that way!
And yes. Pulled pork is my nightmare haha

Sounds delicious. I wonder how I managed to miss the 3 Teas booth. Next year I need to go for both the days again so this type of error is not repeated. :)

I was reading up on 3 Teas yesterday and apparently the owner is/was a nurse who had been quite alarmed at how poor lifestyle choices led to many severe health issues in many of patients she had worked with. A trip to China and a bit of exposure to different styles of living led to further insights which eventually led to the creation of 3 Teas. I would think that has something to do with the minimal salt content.

@Evol Yes and she is so sweet as well. One of my fave people at the tea fest! I’ve tried four of her tea products, all great. Even the one with lavender in it lol

I bet you two could have some fun chats about China :)