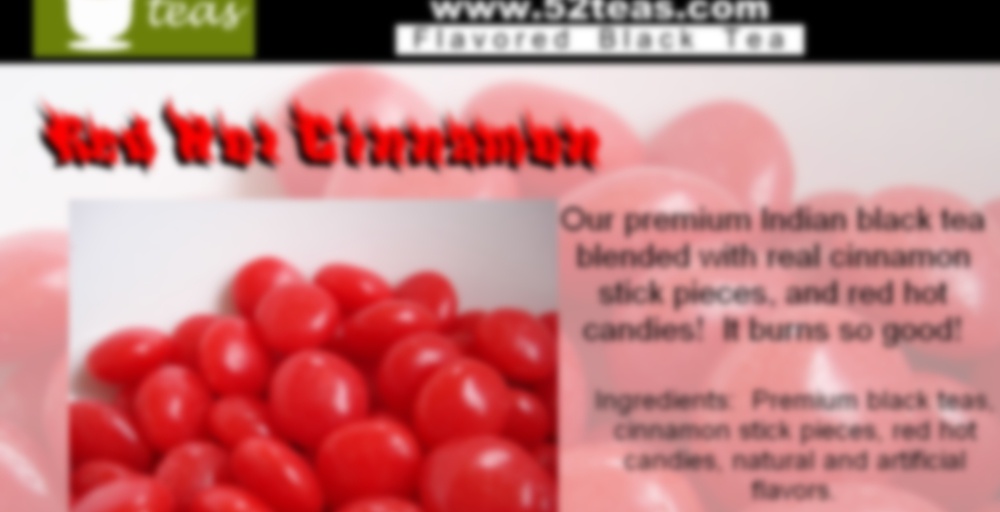 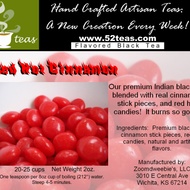 This is not your grandma’s cinnamon tea! We got some special ordered red hot cinnamon flavoring for this blend, and it burns sooooo good!

Prepare to be blown away!

The name makes me expect Harney & Sons hot cinnamon spice, instead I get a nice black tea with a very natural and not candy like cinnamon flavor.

Next time I think it needs sugar.

If your not looking for candy, but a natural flavor this is what you want.

Thanks for comparison to H&S. I think I would prefer a more candy-like cinnamon!

I should have been more specific, black H&S not green, green isn’t as candy, it’s in the middle of the candy scale here

I have a sample of the black tea H&S version and I’m looking forward to its candy red hots deliciousness!

Ooh, I might just have to get this as I love cinnamon but not the cinnamon candies ala hot cinnamon spice. The green was to candied for me so I didn’t even sample the black. Just my tastebuds though. Glad to read your review on this.

@Meghann M it sounds like this is the tea for you! (i hope it dones’t make your cupboard overflow)

Just ordered some along with the Buttered Pecan:) Trying to drink through some samples today to make room!

I can’t wait to hear about the butter pecan, it was tempting but i just got in 3 teas from 52 teas already!

I’ll be honest. Cinnamon is not my favorite flavor in tea, especially when it is the main flavor. Before I really got into tea, I drank a LOT of Celestial Seasonings Bengal Spice which can also be called hot cinnamon water….so I think I burnt myself out on it. Needless to say, when threewhales shared this tea with me, I wasn’t sure when or if I would ever be in the mood to give it a try.
For some reason though, it sounded strangely good tonight as I’m kept awake by a runny/stuffy nose and sore throat. I brewed this up for a little over 3 minutes and added a bit of milk/sugar just in case.
The taste is surprisingly smooth, delicious, and a natural cinnamon that does not overpower the black tea base. I’m quite enjoying this. I can see this being quite perfect on a cold morning. Once again, 52teas comes through with a nicely blended tea!

I am just now finally trying this little treat I received from Doulton, “Thank you”

It is pretty good, it doesn’t taste as candy like as I thought it would and that is a good thing. It smells phenomenal dry. Some of the scent does fade away after the steep but nevertheless a solid cup.

Dang, I totally thought my package in the post today was going to be the Mayan Chocolate Puerh. That pesky scamp sure is taking its sweet time to get to me!

As a cinnamon fiend but candy averse, its entirely possible that I have just overlooked the existence of red hot candies this entire time – though I will be upset if you can’t get them here! Confession time: I definitely had to stop myself from sifting through the entire bag just to pick out and eat all them.
Anyway, yes. The tea. This tea is gooooooood. A smooth black tea (that is so good it requires italics and extra ’o’s), which follows through with a loud whisper of cinnamon sweetness. Yes, I still love my punch-in-the-face jaw-dislocating facial-reconstructive-surgery-needed cinnamon black tea, but this cinnamon tea is perfect for those times when you need an upstanding flavoured black tea that makes you say “Mmmmmm!” rather than a string of expletives.

LOL! “this cinnamon tea is perfect for those times when you need an upstanding flavoured black tea that makes you say “Mmmmmm!” rather than a string of expletives.” that is the BEST description

Cofftea
Delete
“That pesky scamp sure is taking its sweet time to get to me!” I’m glad I’m not the only one! I can wait 2-4 weeks for mine. And I’m even in the US… or teas I order 2 weeks apart come on the same day, that’s kinda funny.

This is actually so much better than I was expecting it to be! I expected this to be similar to some of the other cinnamon teas I’ve tasted (which I do like a lot), but this is different. The tea is a much more pronounced flavor, it doesn’t taste like a candied tea… it tastes like tea with a bit of candy… if that makes sense.

But what I am especially enjoying about this is that I can really taste the fruit notes of the Nilgiri in this blend. It is so good!

I totally know what you mean. I expected not to like this but it totally surprised me and tasted nothing like what I thought it would taste like. It was surprising good. Probably wouldn’t purchase more but would finish the bag. I guess I shouldn’t judge a tea by it’s cover. That and never underestimate the blend powers of Frank. :-)

Oops! I meant the blending powers of Frank.

Thanks to AmazonV I get to try out this tea blend!
Where do I start? Let me count the ways…oops, I am still in "ode to tea’ mode…LOL
This tea got me excited, I love cinnamon in tea. I boiled my water and waited as the tea brewed in my Chatsford. The color of the tea is red like red hots…you did know red hots are in this tea, right!?! Well, they are! I am bracing myself for this first sip, ready to be blown away by the cinnamon fire…The taste is smooth not bitter. I have not dedicted any astringency either..so far so good. The taste is only mildy cinnamon, not the cinnamon fire I was expecting, but it is good tea nevertheless. I added ice to my second cup and viola, there is the cinnamon, not mind jolting, but it is there:)all in all a very nice tea blend.

:) for cinnamon fire you want harney and sons cinnamon black – this one is a more natural cinnamon but still the yummy :)

Well one thing I was curious about was how long the red hot would last and after inspecting the leaves it is gone after one cup. have not made a second cup yet but if this tea is anything like the others from 52teas it will still hold enough flavor for a second cup. Pretty much like the original cinnamon tea I have purchased in the past from them. Not sure the cinnamon red hot candies make much of a difference

Well I have had more than that first cup that I posted about twelve days ago and it does have a different flavor than the original Cinnamon blend.

Started the day with the same Earl Grey as yesterday (no note on that one, I didn’t have anything new to say about it) and then turned to this. Another from my original 52teas over-acquisition that has not been opened until today.

A very sweet cinnamon fragrance over black tea in the packet, and the bright little red hots look pretty among the dark tea leaves.

The aroma from the tea is very cinnamon-y, but not quite as sweet and I can smell a maltiness from the black tea underneath. The liquor is an astonishing, garnet color. Really gorgeous.

I really love the H&S cinnamon, which to me tastes like red hots except without red hots actually in it. This also has stick cinnamon and some flavoring.

It’s tasty, and it is definitely cinnamon-y. It’s on the sweet side, but not really the hot side except for a spicy kick in the finish, right on the tip of the tongue.

And I’m not having the “food tea” reaction, though I didn’t expect to. Candy doesn’t really count as food. Or at least, that’s what I keep telling my kids…

I prefer the H&S because of its base. And also the weird voodoo by which they manage to make it taste like red hots without actually having red hots in it.

But this certainly lives up to its name, is tasty, and I don’t see its novelty wearing off very fast the way the food teas did. High marks from me.

you made this sound so interesting. may have to try.

It is currently an archived blend at 52teas, but they have a cool process where you can put yourself on the waiting list and they’ll let you know if they ever reblend it.