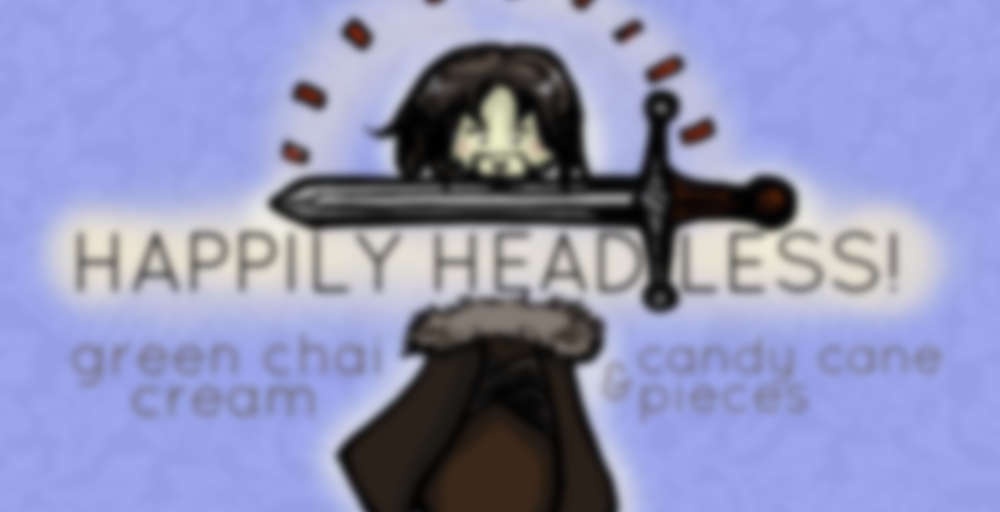 Mint and chai, two flavours I love to have in my tea cupboard. Yum!!
Thank you to Cavorax for sharing!
The blend of spices and mint was perfect in this cup. I really enjoyed it. Though I can’t pinpoint what was in it exactly as the mint seemed to obscure things a tad. Not that I mind, delish is delish and I’ll take it :)

I know right? I think it refers to a cartoon. thanks!!

Not bad. I like the candy cane mint and the spicing is interesting, though it’s not a tea I’d reach for.

Thank you VariaTEA for sending a sample of this one my way! It’s my first tea of the morning; I had it set aside for yesterday but never quite made it to the sample.

I have to say, I’m quite happy I watched enough GoT to understand the character reference here! I think the ingredients picked out by this blender are pretty well thought out too; though I do think there might just be a bit more “Fire” than “Ice” – although to be fair there certainly are a lot of very visable candy cane pieces in the dry leaf.

This is essentially a Chai, though an unconventional one, so I wasn’t the most excited about this blend but it came out pretty tasty! The clove is easily the strongest flavour here, and since that’s the one ‘conventional’ Chai spice that I personally feel you can never have too much of that works very well in my favor.

The rest of the flavour is pretty nice too; there’s an even dispersal of ginger, cardamom and cinnamon with just the faintest little touch of smoke from the Lapsang. The candy cane isn’t as strong as I expected given how much I could see in the leaf and the fact that this is inspired by Ned Stark which obviously ties into the whole “Winter Is Coming”/Ice thing. It is present, but subtly so and it’s more acting as a sweetener than really contributing any strong mint flavour. The finish is a little bit peppery, with maybe a touch too much cardamom.

Overall I think this is better than most Adagio fan blends though; they tend to get pretty muddled because blenders pick out ingredients that are either too similar so there’s no contrast or playing off one another or they pick ingredients that fit the ‘character’ but clash with one another/don’t compliment each flavour. This kind of avoids that for the most part, while still being fairly thoughtful.

I love the artwork!

I made this as a latte and I am not sure what happened but the mint has subsided and is only present in the aftertaste. What do I get when I am actually drinking this then?! Spice cake! Moist, rich spice cake! It is really good! It’s weird since the flavors in this are ones I would usually pass on trying but they are really working for me. I am passing the rest of the samples on to my tea twin so she can try it out but I am incredibly grateful to Cavocorax for the share! I would actually consider buying this if I were placing an Adagio order.

The name of this tea is awesome!

thanks cavocorax for this one. it’s not a bad little chai tea. Still never going to be a favourite but the blending on this was at least something interesting. i like the addition of the candycane which smooths things out a little…though let’s be honest, once you’ve tried a few adagio blends, you feel like you’re tried most of them heh

I made a giant mug of it so I could get ALL THE FLAVOUR, and then I threw the rest in my new box for Sil. (This one will take longer to fill though since I have nothing coming in…. yet)

It smells interesting! Chai spices make me think warm, by the fire thoughts, while the peppermint is a blast of ice. And this tea is part of the A Song of Ice and Fire fandom – OIC what you did there Aun-Juli!!!

The verdict? I really actually like it. The two contrasting flavours never quite mix – they dance around each other and taste great. The base may be a little weak but the flavours and scent more than make up for it. Let’s see what Sil thinks!

I love that this series of tea are all inspired by the many deaths of Sean Bean. :P I can get behind this. So far they’re great.

ETA I’m thinking if I can reduce my cupboard by July, then I may place a birthday order at Adagio! If I can’t mule it through Sil I may just end up paying the min charge because laslt time I ordered so much that shipping worked out to be buttloads anyway… Yikes. But yay! Time to sip! But after drinking all these Aun-Juli blends I am getting ideas on restocks. It’s great that she lets you buy samples from her website!

Cavo…don’t forget stacy does a birthday sale/bash ‘cause she’s a July birthday girl too!