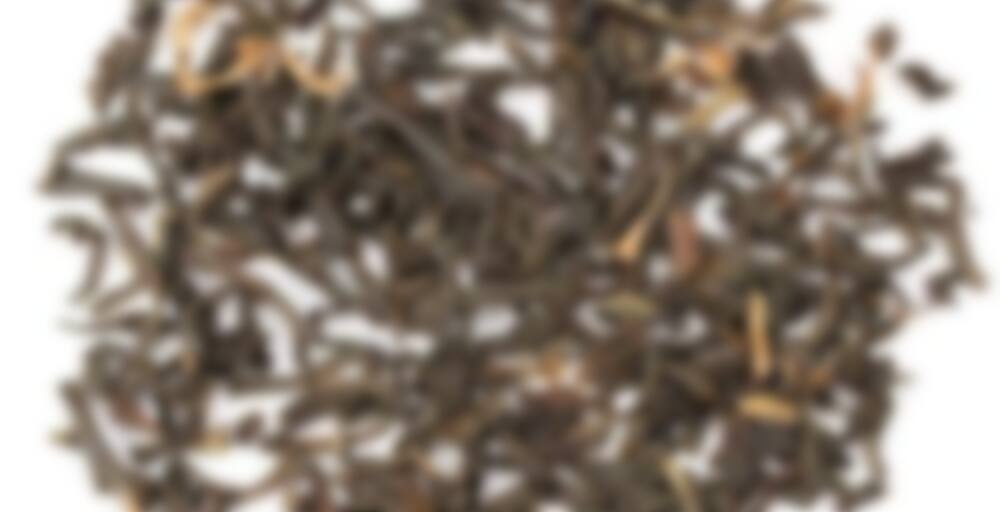 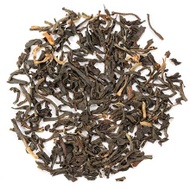 by Adagio Teas
78
You

with 69 Ratings Rate this tea Rate This Tea

Black tea from the Assam region of India. Assam tea brews up a burgundy-red cup with rich aroma and strong malty taste. The latter makes Assam an ideal breakfast-time tea. The ‘Assam Melody’ is a flavorful second-flush (summer) tea from the well-regarded Meleng estate.

And the sip down continues…
Another grumpy morning, I still feel like I’m fighting something, even though I don’t actually feel sick. Monday it was trying to hit my lungs & throat, yesterday it was my head. My eyes had that feeling you get when you have a fever & I ended the day with a burning headache (maybe it was from that big tea order I placed…). So I woke groggy for the 3rd day, and after my morning cup of elderberry tea, I treated myself to a breakfast of a pork chop, sweet potato, & cinnamon fried apples. This must be accompanied by a robust & malty black tea, & this one fits the bill nicely. The sun is shining & I think I feel better already! :D

Sunshine has helped my grumpies by 1000% today, for sure!

yeah, I went out on the back porch, & even there it’s cool, it felt so good to stand in the sunlight!

Ordering tea AGAIN!!! Do you need an intervention or something?!!

I probably do need a tea intervention, lol!

As the determined waves of jetlag begin to erode my consciousness to the point where I can’t spell “consciousness” properly until the fifth or so try, it becomes clear that there is only one tea that can help: Super Strong Assam Melody.

Here’s what satisfied customers have to say about Super Strong Assam Melody:

“Thanks, Super Strong Assam Melody, because of you, I was able to drive to the grocery store without the nagging feeling that I am going to fall asleep at the wheel!”

“You are the only reason that I managed to make it past 3pm today!”

Ask your doctor what Super Strong Assam Melody can do for you!

It’s absolutely wonderful to have you back Ewa :D

Woof. Do NOT let this stuff oversteep. I got my cup together to steep and got distracted – now it’s bitter. Blergh. Even added more splenda and it’s not helping.

I made bad tea :( I’m still drinking it, slowly and unhappily.

(No, not for this tea…though it’s pretty good! This excitement is due to my Adagio order arriving today. It’s my first go-around with them (re: teanewbie), and so I decided to order a whole slew of samplers to start familiarizing myself with tea types I’ve never had before…and I’m going to work through them all. This is the first one. Whee!)

I like this. What I like most about it is that it lacks any bitterness whatsoever, which surprises me, because it seems as though it should have some. I can vouch for the mouth-dryness mentioned in some other tasting notes, though it’s not parching or intolerable.

The smell of the tea as it was brewing was wonderful, but maybe some of the wonderfulness is due in small part to memories out of my childhood. I spent a lot of time with horses (as a lot of little girls seem to) and the smell reminds me a little bit of the scent of hot bales of alfalfa hay in the sunshine…a sort of earthy hay sweetness and warmth that I have no analogue for. If I had to make another comparison, I might say raisins, but not sharply sweet raisins…more like the aftertaste of raisins.

I got a little bit distracted during the second steeping and I’m not sure how long the leaves were in the hot water, but I know the temp was down to 208 instead of 215 when I poured it in. The flavor is more black-tea this time, weaker but still tasty. I’m looking forward to steep #3, but I suspect I’ll be done with it after that.

I’m still fussing with my ratings…I’ve rated so few teas that it’s hard to know where to place this little marker. Stuff is subject to change for a while…

Boiling 5 min, 0 sec
Yours I Like This
9 likes
4 comments
Edit

Have fun with your new shipment! Looking forward to seeing which ones you chose and what you think of them!

Ditto! Adagio was my 1st online tea order and my 2nd experience w/ a loose leaf tea company over all. Have fun wracking up cup points! Creating tea blends are another great way to do that.:)

Whoooo you sound like me. :D Have fun with your new teas!

Hah, my ratings are constantly getting adjusted. Funny how sometimes a single tea can make you realize, “Oh, man. I need to go change everything.”

Hope you enjoyed your Adagio new things! I’m sure I’ll be reading about them shortly!

The last of my sample. I think I might be getting a larger size soon… but, any time I buy more than a sample, I get bored with the tea pretty quickly. Decisions, decisions…

Boiling 6 min, 0 sec
Yours I Like This
4 likes
0 comments
Edit

And with two cups of this early this morning, I’ve finished off this sample! I really do love assams. They’re what I look for when I’m drinking black tea. That being said, I’ve have a lot of very good assams (since I’m always on the lookout), so I’d say this is solid, but there are better ones out there if you’re looking for something outstanding. If you’re just looking for a good assam to get you through the day, give this one a go.

I decided to give this tea a second shot & steep it for a shorter amount of time than I did the first time. I’m glad I did because it changed my opinion of this tea entirely!

The first time around, I clearly must have steeped it for too long because it came out much sharper than it has this time. Don’t get me wrong, I like a touch of bitter to my tea as long as it’s the right kind of bitter (if that makes sense haha). The first time I tried this tea there was just something ‘off’ to me about it.

This time however I found this tea to be much smoother, more refreshing and much more flavorful. I still get that slightly drying feeling in my mouth after I drink it, but it’s much less noticeable this time around. I think this will come to be a staple in my cabinet now that I’ve found how to brew it to my tastes!

Boiling 3 min, 0 sec
Yours I Like This
5 likes
4 comments
Edit

I brew my Assams between 3-4 min and below boiling (195-205). I think the flavor of the tea comes through better, without being bitter.

I wish I’d have known that when I first tried it because I wouldn’t have thought so negatively of it if I had! I will definitely be brewing any Assams this way in the future.

Fuller leaf Assams tend to be the ones I steep a little longer. they don’t “bitter” as easily as smaller leaf varieties.

I will have to keep that in mind! Thanks again :)

Slowly cleaning out my tea cabinet still. I just finished my sample of this one.

While this is nice, I probably won’t reorder it. I like a certain amount of bite to my black teas and this one doesn’t really have it. I’m having it over ice, slightly sweetened. It’s a smooth, rather gentle tea with a flavor that reminds me of sweet potatoes and earth. It isn’t very astringent, either, but that’s a good thing. Anyway, this is incredibly ordinary and mild, so I’m not a huge fan.

Using up the last of my sample of this tea. This time I used about twice the number of leaves, because I am discovering that I am too stingy with leaves in general when brewing. I also steeped it just a little less. Gorgeous, dark, fragrant, fresh tasting tea. I think I am discovering a preference for indian teas.

Boiling 4 min, 0 sec
Yours I Like This
5 likes
2 comments
Edit

I get a little stingy when I get to the bottom of a tin too. :) I’m glad I have this one on my next “to buy” list. Sounds really nice.

I know I’m too stingy, but I find it difficult to use more leaves. Let’s learn to loosen that grip together!

First off, I’m sorry for blowing up everyone’s dashboard page. Ya’ll drank a lot of tea this weekend!!! Just trying not to miss anything.

The latest order from Adagio is in…lots of new teas to try and post about. My Monday morning is starting off with a cup of Assam Melody. I’m very happy with the cup despite being unable to identify one of the smells/notes. The closest I can guess is an ever so slight pine taste? It hits my tongue right before the aftertaste kicks in. I like it. It’s probably not pine. Maybe it smells like clean tea. Like a fresh out of the shower tea? Anyone else have a guess?

I’m not blown away by this tea, but it is quite nice. A couple of seconds after swallowing (after the cup cooled down), my mouth is devoid of moisture. Is Assam known for giving a dry-mouth effect? I did not notice this when the cup was still very hot.

Saving the savory teas until I’ve tried all of my other tins…..

I’ve definitely gotten some pine-y tastes from black teas before. Sometimes I actually get it on Jackee Muntz, but to me that means that I didn’t brew it right. Blacks can be deceptively tough to peg down for me in terms of the brew temperature/steep time for unknown reasons. I can get a great degree of variance from cup to cup, which isn’t necessarily a good thing [because when I nail it, they can be SO DAMN GOOD].

Oh, and also, I haven’t tried a ton of assam, but I don’t think I’ve had a lot of that dry-mouth from them in the past. The drying effect is something that I’ve had vary on the same kind of tea from different companies before, though, if that helps?

I’ve always thought that the astringent, dry-mouth feel was more a feature of Darjeeling teas. shrugs

I’m with both Jillian and takgoti – Darjeelings are pretty consistent for me with the dry-mouth thing and I’ve had mixed results on some Assams or Assam blends doing it. It’s probably just personal preference but I tend to think the Darjeelings that give me that dry-mouth feeling are better than the ones that don’t but on Assams I prefer the ones that don’t give it to me over ones that do. If that makes any sort of sense.